As the Leopard, So the Coliseum

The empire is coming apart. 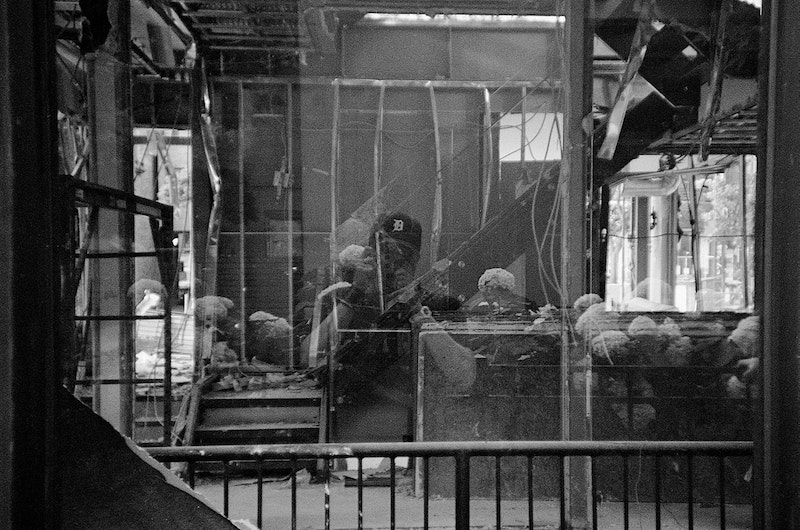 There have been so many mass shootings in recent memory that I’d be at pains to identify a particular incident more tragic than the others. Tragedy is not scalable. So it’s tempting to conclude that the United States (and, by extension, the West) is having a seizure of imperial proportion: mass shootings of innocents; crippling student loan debt ruining the well-being of an entire generation; the gutting of the EPA by profiteers disguised as bureaucrats; the imbecile chief executive as a vain malfunctioning drone; and now a rash of feverish sexual harassment scandals that seem very much like a nationwide outbreak of paranoid schizophrenia. Yet I can't remember a time when someone in the media or in academia wasn't screaming that the empire, if not the sky, is falling.

Maybe one of the inherent properties of empire is that it continually appears to be coming apart. Livy is always holed up somewhere in the capital, writing about corrupted youth. There is always an Alcibiades giving secrets to the Persians and a Cato agitating for a first strike. The game board may change but the pieces generally remain the same—despite the fact that every crisis is presented as the last crisis of the age, the final apocalyptic showdown between those who believe what we believe and those who don’t. After a year of Trump, I believe considerably less.

Inveighing against news media, social media, potboiler “world politics” bestsellers, and tell-all political memoirs has become trite. There are no solutions forthcoming and there’s nothing left to say beyond casting blame, which unfortunately never gets old. Since the day I was accused on social media of being “the oppressor” and “an oblivious inheritor of white privilege,” I’ve generally avoided the cycle of public blame casting, self-flagellation, and virtue signaling that characterizes much of how my academic and artist friends metabolize the poison. I'd rather save my energy for more important things such as giving little biscuits to the neighbor dog, reading, making dinner, and trying to pay the rent.

Moreover, like so much hot air, the distraught things I wrote over the past year about Trump, Charlottesville, Comey, and Sessions are now indistinguishable from all the other nervous little expulsions of gas that have floated up through the media. And they're just as useful. Nothing has changed. We're still having variations of the same conversations we had in November 2016.  Open a window, why don't you.

So it shouldn't have surprised me when I was recently accused, again, of being “part of the problem,” by a white female academic who had been calling openly for the documentation and regulation of white males as dangerous predators. Not some white males. Not white males who’ve been convicted of crimes. But all white males. All of us, based on the color of our skin, once and for all.  Such a brilliant stroke would fix everything, wouldn't it?

Her stupidity almost crossed the boundary into mental illness, which is in line with a lot of public discourse these days, especially on Facebook groups. And it was equally stupid of me to get sucked into an argument with such a person. Still, given that stupid doesn't cancel stupid and only breeds a more potent synthesis—like a magical stupid-homunculus sent out into the world to defecate on everything and make everyone miserable—we had ourselves a festival of Facebook idiocy to which many of her colleagues and students suddenly felt invited.

Everyone piled on to vanquish the oppressor. The discussion was unpleasant and short, though it felt like it went on forever. It accomplished an ad hominem, racist, sexist trifecta from the beginning and I eventually let myself be shouted down because, “These accusations don't seem reasonable” paled in comparison to direct attacks on my sexuality, ethnicity, and circumstances of birth by a rotating support group of about 15 people. Godwin's Law kicked in and Hitler made an appearance. Harvey Weinstein, too. I felt shell-shocked for about 30 minutes after I blocked everyone and closed Facebook. Then I made a sandwich, and watched an episode of Star Trek.

I think I understand this, even from my position of straight white privilege, not having any real problems and never having to struggle in life because I have all the advantages. In “Inferno, I, 32,” Borges writes about a leopard, imprisoned below a coliseum. God speaks to him in a dream and says, “You live and will die in this prison so that a man I know of may see you a certain number of times and not forget you and place your figure and symbol in a poem which has its precise place in the scheme of the universe.” How do I know that I am not her leopard or that she is not mine or that, together, we are not the leopard of someone we hardly know, who will take an action that has a precise place in the scheme of the universe? I know nothing; though, I suspect one could do far worse than function as someone else's personal leopard.

As for the recent outbreak of mass-shootings, I don't know what it means, but I'm fairly certain sexuality or skin pigmentation doesn’t make one a mass murderer and that a new hysterical apartheid is not the answer. I do like what Noah Berlatsky says in “How Whiteness Makes Mass Shooters”: “[T]here’s little evidence that white men are more likely to commit mass shootings than any other men. White people are not compelled by their whiteness to pick up guns and open fire… Violent, paranoid whiteness doesn’t mean that white people pick up guns because they’re white. But it does mean that people in America, of every race, have unfettered access to firearms.” Of course, I like this because I am a white man who has never shot anyone. I know that’s hard to believe.

There seem to be a lot of leopards creeping through the basements of Internet coliseums today. As an appreciator of leopards, especially the Borgesian variety, I’m largely content to watch and wait rather than speak, since observation at least provides the benefit of being able to test one's suspicions, whereas speaking just adds to the methane content near the ceiling. Remember: nothing changes, even if we find ourselves in the unpleasant position of having to play certain parts and move on the board in certain ways. In the meantime, I suppose it is best if we try not to open fire.