The Rainbow Coalition and the Resistance Didn't Win Virginia 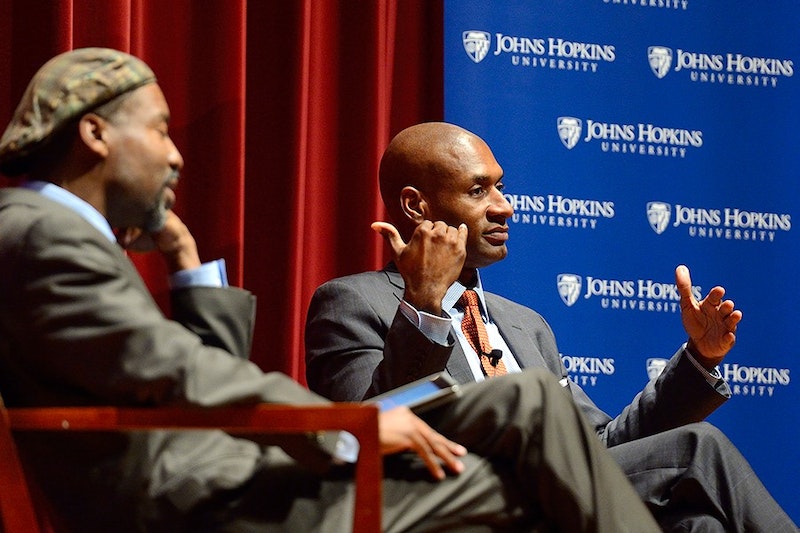 New York Times columnist Charles Blow is overjoyed that the Rainbow Coalition and The Resistance teamed up to give the Democratic party a great victory last week in Virginia, and he's using that as justification for recommitting to the identity politics that put the person he recently compared to Hitler in the White House. In his column last week, “A Win for the Resistance,” Blow starts by explaining that this victory is also a “slap in the face” to the Democrats who “caterwauled last November about how the party had focused too much on women and minorities and ignored angry white men.”

It's delusional to believe that those Democrats who preferred another strategy last year to the losing one did not see the election of their candidates this year in Virginia as a great thing, but rather as a blow to their cause, and the rest of this column continues in the same confused vein. Blow’s thinking is poison to the Democrats, as he finds divisions and negatives where there are none. If you read enough of his work in the Times, you discover that, in addition to his penchant for purple prose (“I have neither time nor patience for such tiptoeing. I prefer the boot of truth to slam down to earth like thunder, no matter the shock of hearing its clap.”), he always positions himself on the moral high ground.

Blow was a Hillary Clinton supporter who never missed a chance to stomp on Bernie Sanders, even as the Vermont Senator campaigned vigorously for the Democratic nominee for president. He's part of the Democratic establishment and works for the establishment media outlet that was so out of touch that it assured its trusting readers, just before the election, that Hillary Clinton had an 85 percent chance of winning. Blow wants to maintain the status quo. He'd be left off the bus if his party decided to travel in the Bernie Sanders direction, where there's a more unified, one-size-fits-all approach emphasizing things that people have in common rather than their individual identities.

The Rainbow Coalition did not win the Virginia election, and very few of those pulling the lever for Ralph Northam were thinking of The Resistance in the voting booth. The Resistance is little more than a Twitter hashtag favored by an angry cadre of bitter Hillary Clinton supporters. Clinton won Virginia last year without any help from the Rainbow Coalition or The Resistance. Trump is an unpopular president who motivated Democrats, many of them college-educated white people in Northern Virginia, to get out and vote. Ed Gillespie actually won more of the black vote and less of the college-educated white vote than Trump did a year ago.

Maybe the caterwauling Democrats of last autumn should have caterwauled a little harder while, under Obama, the Democrats lost the House, Senate, governorships, and state legislatures by relying on Blow’s identity politics. To call for a renewal of such a strategy in the face of such dismal results is not a compelling argument if your actual goal is to win elections. It suggests an inability to learn from past mistakes due to an ideologically-driven intransigence, or an overemphasis on your own interest group to the detriment of the party as a whole. Blow claims that conversations about moving away from identity politics leave a “bad taste” in his mouth, as if that's a valid criterion for making a strategic choice for a political party. “As a black man” he has seen the “corpse flower that can grow from that seed,” he cryptically writes. All the Democratic losses under Obama and Trump's win smell an awful lot like a stinky corpse flower to me.

Blow’s political thinking is emotion-driven, exhibiting little grasp of electoral strategy. He writes that objecting to identity politics is “just a guide for objecting to politics that are not for people who are not white.” In other words, if you examine a strategy that's failed consistently in the recent past and find it wanting, this means you're not concerned with minorities, not that you want to win elections. If you embrace ideas that unite people across the lines of identity, then you're reinforcing white privilege.

On the topic of Trump voters, Blow’s blinded with resentment. Although some of them once voted for Obama, now their souls are blackened and can’t return to the fold. He lapses into grandiosity with “the Enlightenment must never bow to the Inquisition,” and charges all Trump voters with supporting racism, white supremacists, bullying, corruption, and pathological lies. “The moment you supported Trump, you forfeited access to my sympathies,” writes Blow.

If the Democrats are content with being an opposition party, they should follow Charles Blow’s sympathies and narrow perspective. Whites represent 70 percent of the U.S. population, so ignoring them with what Blow calls “inclusive identity politics" isn't smart politics, and neither is consigning all of the 63 million who voted for Trump to the “untouchable” caste because of one vote.