Reagan Idolization Is Fine with Me

You got any better ideas, asks Todd Seavey. 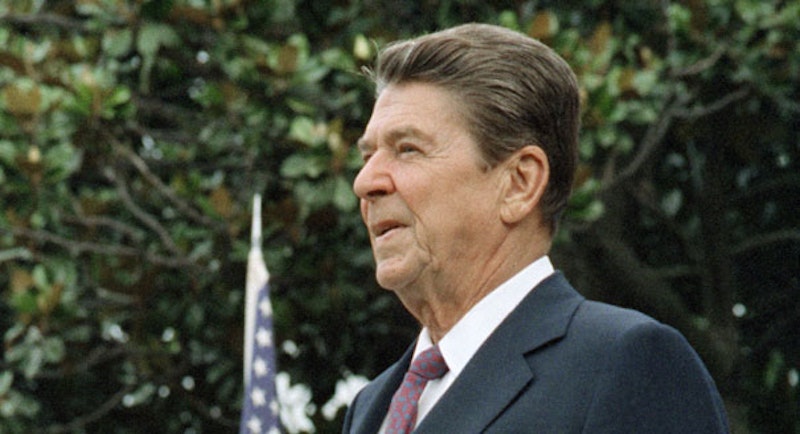 Observant political analysts will notice that Scott Walker’s departure from the presidential campaign means the loss of one of the “Fantastic Four” Republican candidates—that is, the only four I can even tolerate. Walker wasn’t much of a Thing, the big asymmetrical-looking dope, but he was my Thing. (That leaves Paul, Cruz, and Fiorina, but there’s still plenty of time for them to destroy themselves by saying things that are stupid or insane.)

Walker also vaguely fit into the Reagan pattern of touching on the three legs of the Republican footstool—econ, social conservatism, and hawkishness—enough to avoid alienating any large chunk of the party, without seeming too precise or strident in his ideological commitments. If he were a little smarter and a little better looking, it might’ve worked.

Of course, now and then you hear conservatives—Ramesh Ponnuru and Ann Coulter spring to mind—who say that their party should move beyond Reagan-worship. Coulter, obviously the less subtle of the two, went a lot farther than that, writing, “As for these idiot Tea Partiers or whichever conservatives are idol-worshipping Ronald Reagan, he was great for his time, but it was a different world. I don’t think he’s going down as the greatest president when he signed an amnesty law.” Has Coulter got any better ideas? No, actually she likes Trump, who I think it’s safe to call a worse idea.

I don’t think Reagan was perfect either. For one thing, he escalated the drug war—and thus both the militarization of police at home and the policing efforts of the military abroad. He slowed the growth of domestic spending but didn’t actually shrink the government. And he engaged in deficit spending, especially on the military, with long-term inflationary effects that undermined the real economic gains of the 1980s.

But while it would be naive to think of Reagan as a full-fledged libertarian, I’d be even more naive if I believed the conservatives eager to discard his mantle want to move in a more, rather than less, libertarian direction. Does anyone think the average “reform” conservative, looking to shed the mantle of Reagan, is impatient with the big government Reagan left behind and planning to chop away at it in more radical fashion?

More often than not, they’re talking about finding new ways to tweak Social Security and Medicare, dictate education standards at the federal level, conjure up some sort of “jobs” program, and unfurl dreams of militarily transforming the world that make Reagan’s containment strategies look timid—or rather, look relatively sane and libertarian. I applaud politicians who respectfully disagree with Reagan. I’d be very wary of the egomania of any politician who implies he can outdo Reagan.

Jeb Bush, for example, says his party should avoid “nostalgia” for Reagan. Reagan was fine back then, he says, but circumstances “ebb and flow.” Maybe, but don’t forget that the Bushes have tended to be ebbs.