Maybe you should’ve had a reality show. 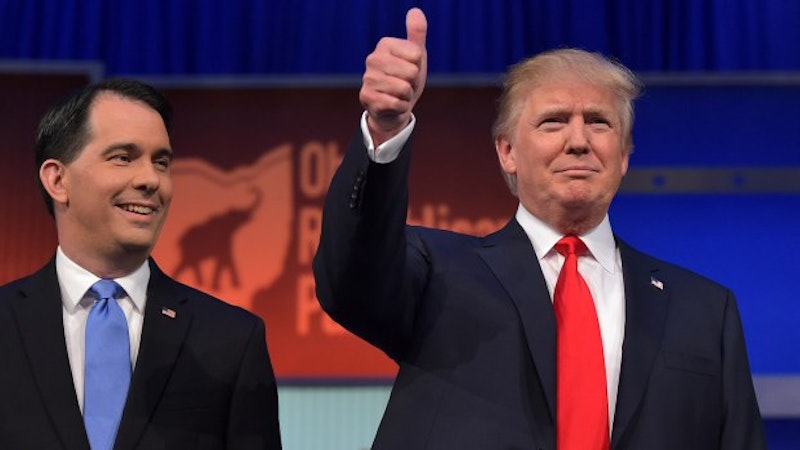 This just in: if the U.S. were a black-dominated society, Scott Walker could earn good bucks as the white best friend in movies. As it is, he'd better find a think tank with a spare desk. The governor is unpopular back home in Wisconsin and he’s officially washed up as a candidate for president. Just to rub things in, I'll add that he has a bald spot that a helicopter could land on. At his exit announcement, he looked down now and then at his notes. When he did so, what appeared to be a dead white animal could be seen festering among the strands of shoe-polish black. This was the bald spot, and I guess it was smaller than a curled-up hamster, but I'm not really sure. The white hamster would appear suddenly; it had a habit of looming at you, as if jungle fronds had parted and there was something dire that you now had to reckon with. It made his hair seem like a sham. Apparently there was much less on top of his head than normally met the eye.

That could pass as a metaphor for Walker's campaign, or so I gather. Reason's Peter Suderman argues that Walker just couldn't get it together to learn about the issues beyond Wisconsin. As a result he didn't have much to say on the stump or in the debates, and the voters noticed. Therefore, he zeroed out as a national candidate and will now go away. Sounds plausible, but this has also been the season of Donald Trump and—especially to my point—Ben Carson, a man whose policy heft makes Sarah Palin seem like Walter Lippmann. Yet the GOP's voters and donors can't cut some slack for somebody who's supposed to be a hero of their party. My mean-spirited gloating aside, I think there's something very wrong with an outfit when one of its champions can be tossed aside so quickly and casually. Either Walker deserved better or he never should’ve been up on their shoulders.

And up there he was. The man who smashed his state's public employee unions was treated as a star when the Iowa Freedom Summit gathered back in January. His speech there got such a reception that he became, in the words of National Review, the “hottest thing in Republican politics.” Not that the speech was so great: just okay, was the Review's verdict. But the man had remade the underpinnings of a whole state's politics and he had done so according to wingnut specifications. He’d done something that was great, and for the gang that's what counted. Arriving at the Iowa summit, the Review said, the conquering governor “was pushing at an open door. There was so much goodwill for him among conservatives that a merely creditable performance would probably have created a surge of support—and it did.” After all, the Wisconsin showdown was “the most high-profile conservative political and policy success of the Obama era.”

That's too modest. Think over the Bush era. Do Medicare-B or No Child Left Behind count as conservative triumphs? GOP voters don't think so—when the Tea Party rose up, the base repudiated almost everything their party had done domestically during its reign. That leaves foreign policy, which means the twin disasters of Iraq and Afghanistan. Over the past decade and a half, the GOP and its fans can point to nothing but the Bush tax cuts, and those were back at the era's beginning. Not that the tax cuts did any good, but at least the party isn't ashamed of them.

Out of the GOP presidential field, the contenders' biggest achievements are the run of Celebrity Apprentice and Walker's Wisconsin triumph. In sizing up the contenders, as opposed to a speech, the Republicans have decided that the second achievement doesn't carry much more weight than the first. For some reason this surprises the rest of us.