A Modern Man in a Modern World

The way we talk is awesome. 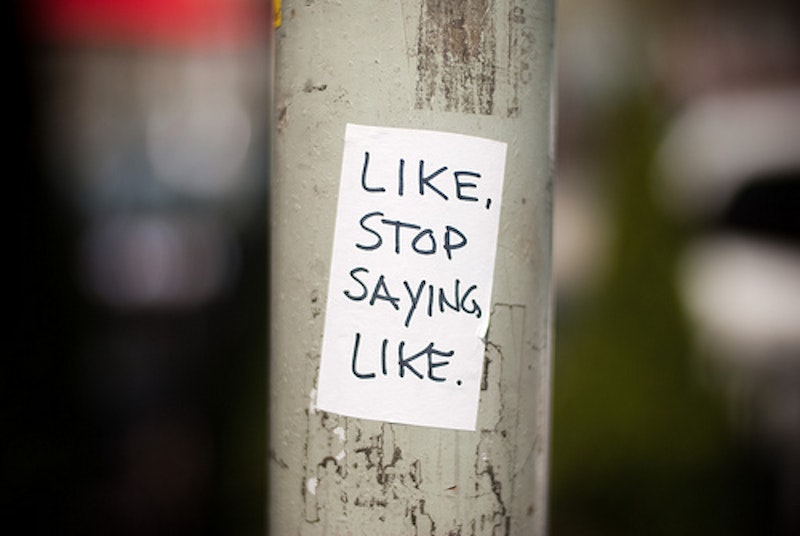 So yeah, I’m old enough to remember the last time I agreed with paleoliberal New York Times op-columnist Charles Blow. Like, it was today. And in writing about the media’s slobbering over Carly Fiorina, who, you know, totally stood up to The Donald in last week’s latest clown-car Republican debate, I saw what he did there. So yeah, Blow completely blew away Carly, writing that while gullible horse-race obsessed reporters had the take-away that the failed Hewlett-Packard CEO emerged from the “presidential disaster pageant” as the new darling she like totally doesn’t give a rat’s you know what about feminism or breaking the glass ceiling like Hillary would. I mean, Blow’s right—and he won’t walk it back—and I just can’t wrap my head around the idea that voters would pluck her from the clown-car over Ohio Gov. John Kasich, the quasi-moderate who, like, has real experience. Sigh.

But it’s okay, since even though Chuck Blow and I aren’t reading from the same hymnal—though we're both, like, really familiar with the better angels sitting on our shoulders—we do agree that Carly’s a dud. I mean, she’s not even campaigning in poetry! So there’s that. But, you know, I gotta say, The Bern? I’m just not feelin’ it. Granted, his Robin-Hood campaign is a potential game-changer, defying all the conventional wisdom about really old white guys actually polling ahead of sprightly Hillary Clinton, but I don’t know if gazillionaires like Mark Zuckerberg and Bill Gates are gonna be down with The Bern taxing them at a 90 percent rate. Sort of like what Mick & Keef had to deal with in the UK 45 years ago when the government was trying to take all their money.

And, so yeah, I was all like Oh No! when I found out that Jack Larson, who played Superman’s buddy in the TV show that was like an essential part of my childhood, just passed. Can’t wrap my head around it, even if the guy was 87 and I hadn’t given him a thought since Hershey bars were a nickel, back in the day when there wasn’t even a sniff of a new Gilded Age, man. Well, WTF, at least Viola Davis was so awesome last night at the Emmy Awards, quoting Harriet Tubman and shit like that, after accepting her Outstanding Actress award. See, that’s what I can wrap my head around. You saw what I did there? I mean, that’s the narrative of 2015, even if rednecks are still allowed to bring guns into churches and no one wants to demolish the Jefferson Memorial even though that randy old dude was banging, like seriously, a bunch of his slaves. Not that I know that 4 sure, but you know, like fuck all those dead white guys. Now, I’m a white guy too, but not dead yet!

So yeah, I’m all pissed off that Apple apps in China are all screwed up, and you know, that’s gotta be the fault of Tim Cook, which I like really feel bad writing since he came out of the closet with all that dignity, even though haters trolled him on Twitter. Stay classy—and thirsty!—my friends! And you know I talking to you, you & you, the clown-car citizens of Texas, which, like, really ought make good on its threat to secede, you know? Which would mean no more Ted Cruz, and that’s like a total anti-sigh if you can see what I’m doing here.

Gotta dash for some coffee and bacon, hombres, but one last thought: You know that Hank Williams biopic, I Saw the Light—starring Brit actor Tom Hiddleston, which is like kind of cray, but Whatevs—that’s coming out on Nov. 29. I. Cannot. Wait. To. See. It. Like, I don’t want to humblebrag, but even though I’m a dunce about Drake, I’m so down with Hank’s tunes and have been since like… forever.