Why won’t reporters do their jobs? 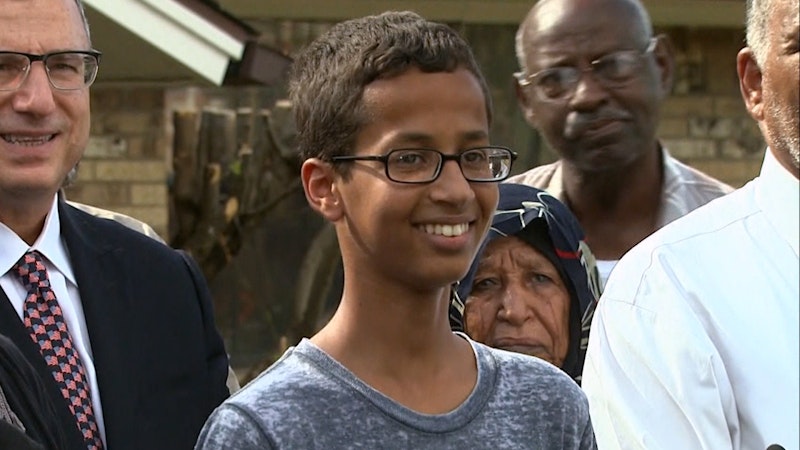 A bright 14-year-old Muslim boy brings a contraption to school that looks like a bomb. It’s actually a harmless clock. He carries it into his English class and the alarm goes off, in turn causing concern with his English teacher, who eventually notified the principal, after finding Ahmed Mohamed’s responses unsatisfying. The police are called, and the young man is handcuffed and interrogated before eventually being released without charges. His innocent interest in science was stifled by the authorities, who targeted him because he’s a Muslim. This never would’ve happened to a white student, but Ahmed is a dark-skinned Muslim who had harsher rules applied.

This is the scenario played out in the mainstream media. Ahmed's phone won't stop ringing now, because so many leaders are eager to help right this wrong. This story is based on the flimsiest of evidence, but it’s generally accepted because social media adjudicated this matter instantly, way before the facts were in. Although school officials are burdened with zero-tolerance rules that can lead to absurd overreactions, the emphasis was placed on Ahmed's religion and skin color.

It’s not difficult to put together a different scenario. In this version, Ahmed knows that what he brought to school is going to cause concern. In this era when kids are suspended from school for making their Pop Tart into the shape of a gun, this pencil case with all the wires and the circuit board and the digital clock face inside could easily look pretty scary to an English teacher who, after all, is not a bomb squad tech trained to recognize a harmless device on sight.

There’s much speculation about how this poor kid, who was just involved in a science class project, could’ve ended up in such a position, but the clock wasn't part of any school project. It was just something that Ahmed decided to make to impress his teacher, or so he says. And for some reason, he decided to place the clock inside of a pencil case that resembles a miniature suitcase, but there's nothing unusual about that, right? Anything goes in today's American schools.

Ahmed’s been praised for showing ingenuity, but what if this isn’t the case? What if he merely removed the case of an old digital clock and put the rest of the device inside the pencil case, as shown in this video. Not a lot of ingenuity required to achieve that result, but I haven't seen the media questioning the story of his "invention." He said it took him about 20 minutes to put his invention together, but perhaps it was more like 20 seconds. Is anyone checking?

Ahmed claims that he felt only surprise and "sad" when his device set off alarm bells at his school, but it appears he's disingenuous here. In an on-camera interview, Ahmed talked of using a cable to keep the pencil box closed, as he thought that locking it would make it look "suspicious" and a "threat." So here we have an explicit acknowledgement that he was aware what he brought to school could’ve provoked suspicion. No reporting on this key fact. I'd bet that it's the first time you've heard about it too.

Adding another layer is the fact that Ahmed seems to be getting some coaching from at least one family member. Billionaire businessman Mark Cuban, appearing on Bill Maher's Real Time, said that when he talked on the phone with Ahmed that his sister was feeding him answers. Why would this be happening if it was just a simple, harmless case of a kid bringing his completely non-threatening invention to school? Is there one version of events that’s tailored for the media?

When social media gathers a head of steam, as it has with Ahmed Mohamed, standards of journalism are usually the first casualty. It looks like Ahmed did not adequately engage with his English teacher when she raised her concerns with him (Cuban also made this point), and one wonders why he wouldn't do this. By his own admission, a threat could be perceived in his device, but he still wasn't willing to be forthright enough to allay her well-founded fears. Perhaps this was the plan all along—to test the authorities.

I don't know what Ahmed Mohamed's intent was in bringing his clock to school. I do know that the media hasn’t done its job in reporting this matter because they’re afraid that if they actually did their job, what they might find may not be palatable to the public. After all, Obama has already called Ahmed's clock "cool." The verdict came in days ago, and facts were not deemed necessary in reaching it. If you want to find out what really happened these days, you can't rely on the lazy media. You need to take a DIY approach.