Prosecutors Need a Rat to Beef Up Comey’s Testimony

Obstruction of justice wouldn’t be “fake news” for Trump. 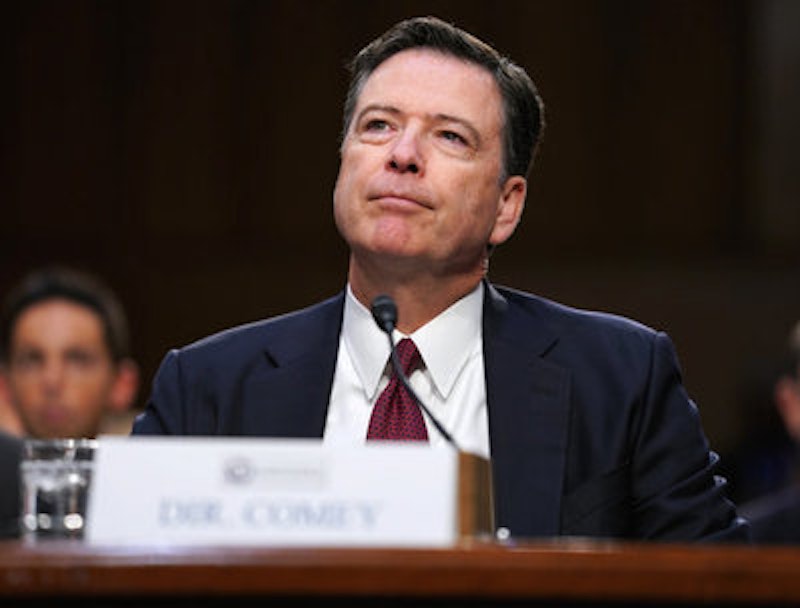 Anyone who’s ever dealt with the FBI knows that agents travel in pairs so they can cover each other’s butts. That is, except those who infiltrate the mob and hope to get out alive with their sanities and identities intact before they’re sent for.

James Comey, the fired FBI director, had no choice but to go in alone. That’s what happens when the president invites you to dinner, with, perhaps, another anonymous and unobtrusive eves-dropper, a secret tape recording system. But Comey went to the White House with some recording equipment of his own—a 20/20 memory and reputation for bulletproof integrity. Instead of the usual sidekick to back up his story, Comey compiled contemporaneous notes of every encounter he had with President Trump because he didn’t trust him. As a result, the nation now has an authoritative source to validate what most reasonable people knew or suspected and is supported by new polls: Trump’s a certified liar.

“I was honestly concerned that he might lie about the nature of our meeting,” Comey told a Senate committee, “so I thought it really important to document. I knew there might come a day when I might need a record of what happened not only to defend myself but to protect the FBI.” Comey, a lifelong Republican, said he felt no such uneasiness or distrust with the two previous presidents he worked for, George W. Bush and Barack Obama.

It’s a presidential instinct and prerogative to secretly record important conversations either for their own protection or eventually for the public record in books that will enrich them for their selfless public service. But Comey’s been around the course a few times to assume there were more than two participants in the conversations. Trump’s own words were that “James Comey had better hope that there are no ‘tapes’ of our conversation before he starts leaking to the press.” Comey’s confident response in testimony: “Lordy, I hope there are tapes.”

Or is Comey a liar? We now have an escalating polygraphist duel between the political drama’s two principals—one who has a moralist’s reputation for truth-telling, the other who has made 623 false and misleading claims since assuming the presidency, according to The Washington Post’s fact checker. At a news conference the day after Comey’s testimony, Trump accused Comey of lying, which was no surprise. When asked about the existence of tapes, he offered a cryptic “You’ll see in the very near future.” And, sticking his neck out even farther, Trump said he is “one hundred percent willing” to talk to Special Counsel Robert Mueller, the ex-FBI director heading the investigation into Russia’s intrusion into the presidential election which is rapidly assuming the appearance of a probe of the Trump Administration.

Whatever errors in judgment or political miscalculations Comey might have made—two statements (or letters) about Hillary Clinton’s emails and private server and the decision that there were no grounds for prosecution—his integrity and believability are without question. His testimony before the Senate Intelligence committee was unflinching and unwavering. Prosecutors (which Comey once was) will tell you that’s because he was telling the truth. At various turns, Comey had been denounced by Democrats and praised by Republicans, notably Trump, for his intrusion into the 2016 campaign. He was later trashed by Republicans, mainly Trump, for excusing Hillary Clinton from indictment.

The issue before the various investigations into Russia’s meddling in the 2016 presidential election—and there are three, the Senate, the House and the special counsel—is whether there was a symmetrical connection to the Trump campaign. Trump’s concern, expressed directly to Comey in meetings and phone calls, is whether he is personally under investigation. Comey assured Trump on several occasions that he is not. That, in FBI talk, is fine as far as it goes, which is not very far. To illustrate from personal experience: I have a copy of the statement issued by former Gov. Marvin Mandel after former U.S. Attorney for Maryland George Beall stated publicly that Mandel was not a target in the continuing federal investigation into public corruption in Maryland (in the early 1970s.). Two years later, and under a succeeding U.S. attorney, Mandel was indicted on 19 counts of bribery and fraud.

The point being that one day’s bystander is the next day’s target. And the target is usually the last officially notified. No one can predict, with certainty, where an investigation will lead. Prosecutors and investigators like to employ a technique they call “dealing up.” Begin with the little fish and move up the food chain of witnesses and see who they hand over to save their own skins.

Prosecutors need a rat. The threat of prosecution and incarceration is a mighty convincing persuader which, under even the best of circumstances, heightens bladder activity. And not even Trump, as brilliant as he claims, can remember everything he said to whom and who said what to him. By now, very few people believe him anyway. Presidents cannot be indicted. Congress is the ultimate judge of their conduct in office. And if Democrats recapture the House in 2018, impeachment is almost a certainty.

For in the end, everyone is out to save his own backside. Witnesses shave the truth, dissemble, let the memory do the old dipsy-doodle, but never lie unless you’re certain you’re the only one who knows the answer. And prosecutors rarely ask a question unless they already have the answer. Usually they get it from a cooperating witness. The only crime a person can commit before a committee of Congress, or a grand jury, is perjury. Knowing about a crime is not a crime. Lying about it is.

So far, at least five persons close to Trump, or his campaign, have been directly connected to Russians: former National Security Adviser Michael Flynn; former Campaign Manager Paul Manafort; Attorney General Jeff Sessions, businessman Carter Page; and Trump’s son in-law and White House adviser, Jared Kushner. From there they fan out to lesser persons and entities. What they say in public or private, intentionally or unintentionally, that might titillate investigators only they and their lawyers know at this point—if they’ve been truthful with their lawyers. Kushner and Manafort have offered to testify. Flynn has asked for immunity in exchange for his testimony. Usually such a request means a witness has something to say that might incriminate him or someone else. At this point, Flynn has not been granted immunity.

Trump repeatedly used the word “cloud” to describe the Russia problem hovering over him and his administration. And he views the Russia story as a concoction by Democrats and a fabricated excuse for why they lost an election they should have won.

There has been speculation of a borderline case of obstruction of justice by Trump. Comey may not have locked up the argument but he surely contributed to the pattern. At least three times—once at dinner, twice by phone—Trump tried to persuade Comey to make the Russia story go away. Trump asked Comey to let Flynn off the hook because “he’s a good guy.” Trump has repeatedly denounced the Russia story as “fake news,” which in Trump world is news he doesn’t like.

It’s also widely acknowledged that Trump tripped a few circuits when Sessions recused himself from any Russia involvement after it was revealed that he misled the Senate committee during his confirmation hearing about contacts with Russians. And Trump admitted during a television interview that he intended to fire Comey all along because of the Russia investigation. Trump’s private New York attorney, Marc Kasowitz, has attacked and disdained Comey’s key points.

Comey said in his written testimony, “My instincts told me that the one-on-one setting, and the pretense that this was our first discussion about my position, meant the dinner was, at least in part, an effort to have me ask for my job and create some sort of patronage relationship.” A paragraph later, Comey wrote: “A few moments later, the President said, ‘I need loyalty, I expect loyalty’.” Translation of “patronage relationship”: You owe me for your job.

Trump, never one to give his thumbs much of a rest, waited 24 hours before he flashed a Twitter claiming “total vindication,” which it wasn’t. And the worst he could say about Comey was to call him a “leaker,” which Comey freely admitted in his testimony. In the end, Comey got exactly what he wanted—revenge served cold and the appointment of a special counsel to remove the Russia investigation from the Trump-controlled Justice Department.