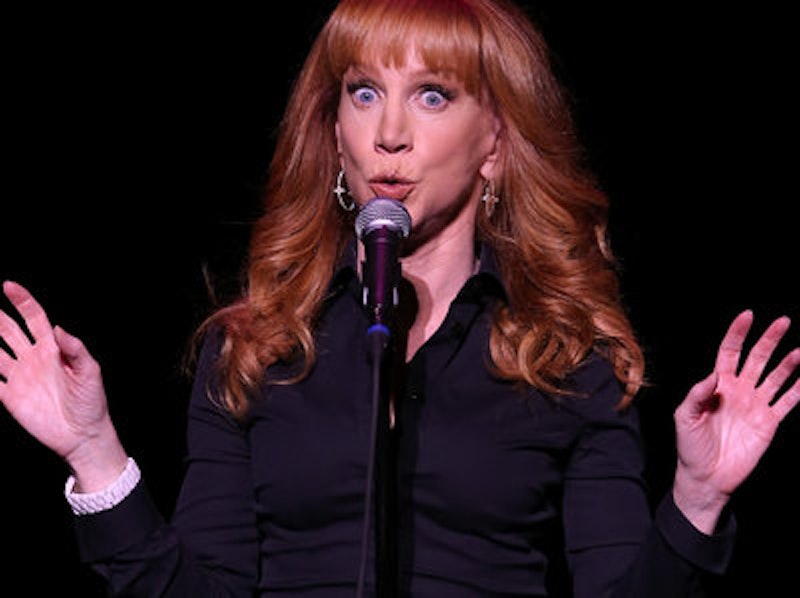 Kathy Griffin, still tortured and unable to sleep being crushed by the patriarchy for a harmless joke, had a brainstorm while hate-watching CNN in the early morning hours of May 31. Grabbing a spray paint can (red) she'd recently tossed into her backyard in anger, she sped out of the garage of her $10.5 Bel Air mansion. Heading for LeBron James’ $21 million mansion over in Brentwood, Griffin gripped the paint can tightly while pondering the genius of what she was about to do. This time she'd do it right. Soon, she'd even be able to confide in Don Lemon over drinks and he'd understand.

Arriving in the dark, Griffin parked around the block, fastened a scarf around her head, and walked briskly to LeBron’s front gate. After spray painting the word “nigger” on the NBA superstar's front gate (yes that hurt, but she was hurting even more, she told herself), the red-headed comic headed home, blasting Gloria Gaynor’s “I Will Survive” on her car stereo for approximately the 120th time that week. Stopping to dispose of the paint can and scarf in a dumpster she'd spotted behind a Denny’s on Sunset Blvd., her thoughts wandered to the huge distraction she'd created to take the media heat off of her.

LeBron wasn't at his summer getaway at the time, but his people were. They photographed the vandalism, called the police at 6:44 a.m., and somehow managed to give the gate a new paint job before the officers arrived. Next they called TMZ, which was disappointed they weren't getting the usual photo or video, and then they notified the boss, who needed to know about it on the day before his team was to start playing​ for the NBA championship. LeBron soon had to address the media to discuss his pain.

Unaware that a desperate, half-crazy female comedian had defaced his property, LeBron spoke in dramatic terms, invoking the name of Emmett Till, a 14-year-old African-American who was murdered by white racists in 1955. The media, on cue, exploded in collective rage. Once again, it was time for society to look within and examine its own seemingly invincible systemic racism. LeBron James, knowing the Warriors were about to clobber his Cavaliers, had succeeded in providing cover for himself. Distracted by this new, dark chapter of American life, leading his team to its second straight championship would be too much to expect, even from him.

You didn't hear about all that? Well, it's just a theory I came up with based on recent events and the few facts I've been able to piece together. The one you heard is just a theory too, as there's no supporting evidence for the public to examine. While I’ve applied scant rigor to substantiating my theory, the media's applied even less to theirs. At least I've raised some worthy issues for examination.

The L.A.P.D. claims to have a photo of the defaced gate, but they haven't released it. Maybe they fear it would trigger another Rodney King-style riot. In this age, when there's always a photo, nobody else has one nearly a week later. TMZ, which always has a photo or video, posted only a meaningless snapshot of the street outside the mansion.

L.A. wakes up early, but nobody walking their dog or driving by stopped to photograph the defaced gate and get it to TMZ. When you live in Brentwood, the cops arrive pronto when summoned, but somebody found the right paint and re-painted the gate before they got there, which is tampering with a crime scene. You don't do that if your goal is justice in a courtroom. Had LeBron’s people wanted to temporarily conceal the offensive word, they had several better options at their disposal. No photos of anyone painting the gate have surfaced either.

The police have released no surveillance video to help them identify the perpetrator. One of the world's most famous athletes is rarely at his posh estate, but he doesn't have cameras installed? The media’s job is to point out such inconsistencies, but instead they talk about how “brave” LeBron is. Exactly what he did that was so courageous is left to our imaginations, but speaking out on a matter that makes the public like you more isn't brave, especially when you weren't even at the house when the incident allegedly occurred.

LeBron’s other option was to focus on basketball and let the police handle it while waiting for the facts come out. Instead he chose to embrace his victimhood in the most dramatic fashion possible, linking it to a child who was tortured and murdered in an incident this nation should never forget. Athletes at his level aren't victims—certainly not in a case like this one. It's the regular black people who feel the brunt of racism, but LeBron felt the need to mention that it happens to rich and famous people like him too. He wanted the focus to be on his pain.

Everything about this whole affair is fishy, but the lazy media’s too busy lionizing King James to do its job. In the post-truth era, it's especially important that the media deal with facts instead of feelings. If you want to find a real victim in the NBA, look at Oklahoma City Thunder center Enes Kanter, who’s spoken out against Turkish strongman Recep Tayyip Erdogan and paid the price. Turkish authorities have cancelled his passport and detained his father.