My Unreasoning Joy at the British Election 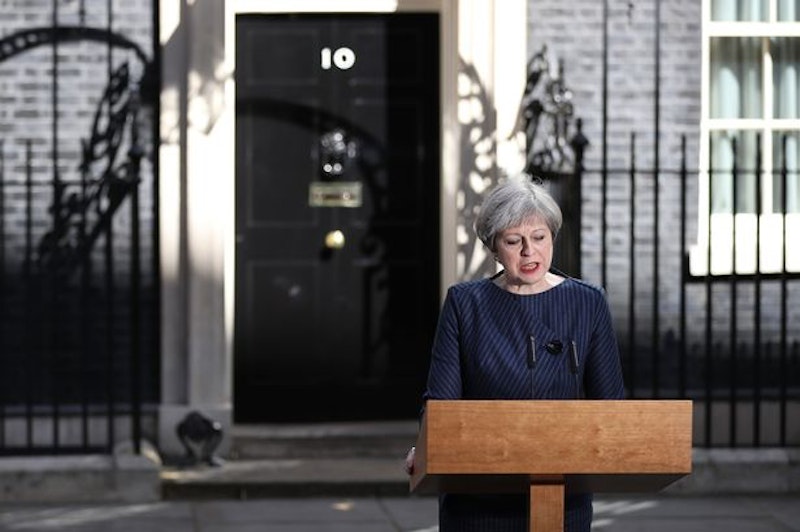 Sometimes headlines are better in sequence. From Tuesday: “Theresa May Says She Will Tear Up Any Human Rights Laws That Obstruct New Terror Legislation.” From last night: “Conservatives Lose Majority, Prompting Calls for May’s Resignation.”

The Tories tried to strong-arm Britain. They thought the Brits would cough up some freedom and self-respect in return for safety. The voters said no. There you have Jeremy Corbyn’s night of triumph as viewed from the New World, or my desk. Others raise a different angle. Ben Jacobs, the Guardian reporter, tweeted this a week ago: “Polls are looking very shaky though a fluke candidate hated by much of his party has never defeated a seemingly inevitable woman for office.” William Kristol, a right-wing Trump hater, tweeted this last night: “The English Speaking Peoples, forgers of modern Civilization, creators and defenders of ordered liberty, have lost their minds.” You’ll see that Jacobs and Kristol pair the British and American upsets, the Corbyn surge and the election-by-minority of Donald Trump.

“Stable” was the Conservatives’ watchword in the campaign—“strong and stable,” to be completist. Prime Minister May clung to the theme even as the ceiling came down. “At this time the country needs a period of stability,” she said after the vote, making her pitch for the Tories to hang on. Here in America, Hillary and the Democrats represented stability, just as the Democrats had under Obama. I kept expecting America to swing toward stability, to collectively recoil from accepting Third World standards for government. But America didn’t recoil and neither did it swing. It continued larking about in its morose, bloody-minded way, and next thing we knew we had a Trump White House.

Stability flopped with British voters too. A swing developed, and it was away from the stability floggers. Britain voted for a hung Parliament. When not promising to crush the terrorists, the Tories promised the simple calm of knowing there’d be a government for five years. Instead the country said, what the hell, let’s get by without. This decision is inconvenient, given that Brexit must be negotiated. But one party’s going through an identity crisis, and the other wants to get a lock on power while threatening civil rights and shaking down the populace. (The Tories said they’d make old people pay for their care from the state, an idea that appalled voters.) A monumental punt may be the country’s best move.

But what about stability? It’s harped on when chaos is near. But May’s government made chaos the terrorist threat; that threat was the dreadful thing that had to be warded off by voting for the people in charge. In the American choice, chaos was and is simply chaos, otherwise known as a chief executive who’s mentally unstable and who doesn’t understand or care about democratic government. The American choice was between a potential dictator and somebody with a weakness for speaker’s fees and roll-your-own email procedures. America decided, sort of, to go with the nascent dictator.

The British vote confirms something: the early 21st century has begun a period of upheaval. In two of the world’s richest and greatest democracies, the established order has run out of gas with the public. But we knew that the resulting electoral cataclysms could be frightening. Now we know they can be hopeful.