Don't Look Now, Sen. Lee, But You're in Trouble

The Republicans learn about pain. 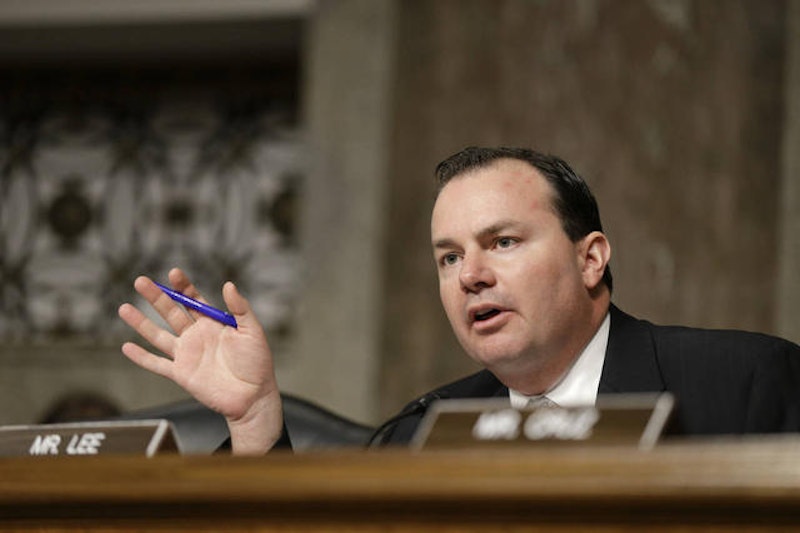 We hear a lot about gerrymandered districts. They're supposed to be bulletproof jackets that let crazy Republican House members carry out their commando operation against public opinion. But it looks like the jackets may shred.

Utah voted by 70 percent or so for George W. Bush and Mitt Romney. But Utah just turned against Mike Lee, its junior senator and the chief sidekick of Sen. Ted Cruz of Texas. Five months of raising hell against Obamacare and the established order have resulted in what The Hill calls a “20-point negative swing in his favorability rating.” Half the voters in Utah are now against Lee, just 40 percent in favor. The last poll, in June, found the reverse.

The shoving match over Obamacare was supposed to be mortifying for Democratic senators. Democrats in red states were supposed to be at risk because they had to vote against taking Obamacare's money away. Instead of shaking they stepped up and took the vote several times over. Now Mark Begich, a Democrat in Alaska, has the 10-point approval spread in his favor while Lee sinks. (That's according to Public Policy Polling. The story reporting the poll contains a piece of bluntly accurate news writing: “She quit as governor in mid-term to make money.” The “she” is Sarah Palin, of course. PPP says Begich would beat her by 16 points if she ran against him.)

Ted Cruz was supposed to be the crusade's gallant leader, but people don't seem to like him. Gallup just polled Americans and found that his disapproval rating has doubled since June. This happened while his name recognition rose by a third. A few months ago the wicked-nosed Texas senator mattered only to wingnuts and the people who hate wingnuts. Then he gave his Dr. Seuss speech and America took a look, with dismal results: his unfavorables are now at 36 percent, while his favorable rating is stuck in the mid-20s. The best thing Cruz had going for him was that nobody knew who he was.

Leg grab proves unwanted. It's been a ragged time for Republicans. The right lunged for glory, its sit-down-and-shut-up moment when Papa Bear would slam some sense into preening Obama and his muzzy liberals. Instead the country is reacting as if someone just tried to molest it. The boys made their move and it turned out to be a downer.

The right scratches its head. On the screen it sees the Democrats bungling things in classic fashion: the memorials, Harry Reid discussing cancer kids. Obama is his usual self, ranging from adequate to pretty decent to inadequate. The poor guy was telling workers that the Republicans wanted something just for doing their job.

Well, who doesn't? It wasn't until a few appearances later that Obama thought of saying the Republicans wanted something for not wrecking the machines or blowing up the plant. He never managed to say, “Put down the bomb and we'll talk,” a phrase that might have crystallized matters. Yet the Democrats are winning.

The only thing Obama really did was hold tight, which was the right thing. The Republicans have just learned there's a reason you don't mess with your country's political stability, and especially not its financial stability. Fantasies flee people's heads when the TV says their mutual funds may get another treatment of September 2008. We've learned how hot that stove can get and we're not going to get jostled into touching it. Even the government haters in Utah can tell wrecking when they see it, and they know the pieces are going to fall on them. The only people who didn't get this were the professional dervishes like Ted Cruz, the characters who devoted all their time to firing up the civilians. The civilians know when to say fun's fun, but now the wild rumpus is over.