A police watchdog journalist attacked by other journalists (Mark Ames and Yasha Levine). 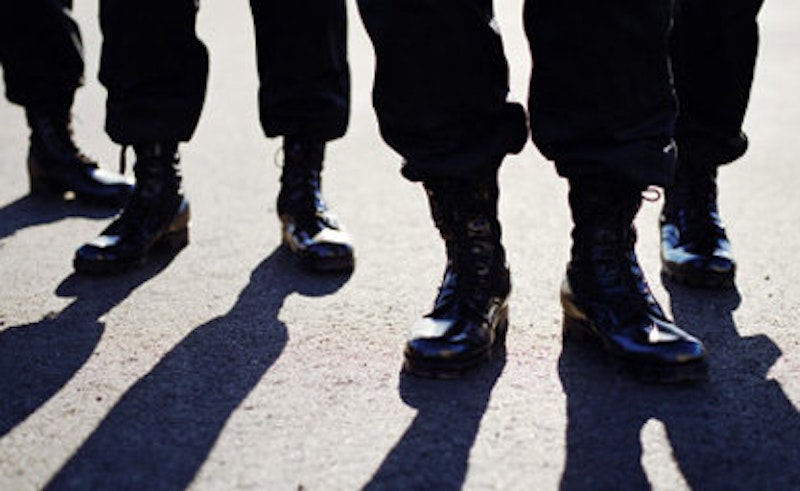 Knock on the door. “This is the police!” After a pause, the man in the office said “come in” with a voice that tried to stay calm. The door opened to reveal Radley Balko seated at his desk. He was slightly pale with widened eyes. Both hands were clearly visible, palms open above the desk to show he was neither armed nor reaching for anything. “You scared the hell out of me!” he said to me, exhaling.

I was making my rounds at the Cato Institute in Washington D.C., saying hello to the staff around the building after a long trip to the better coast. Balko normally would have assumed it was a joke, but just minutes ago had gotten off the phone with a lady whose husband had been killed in a police raid. It came as a shock to her because there was no reason for the cops to be at her door, much less knocking it down. They had gotten the wrong address and now she was a widow. So Balko was understandably jumpy about police raids that day in late 2005.

Balko’s digging for his policy job found evidence of a lot of such botched raids. About half of his white paper for Cato in 2006, “Overkill: The Rise of Paramilitary Police Raids in America,” is an appendix of horrors: one case of police venality and brutality after another. To pick an example at random: “On January 19, 2001, police from Russellville and Franklin County, Alabama, raided the home of Sandra Hillman and her daughter Marquita. Agents with a no-knock warrant kicked down the door to Hillman’s apartment and held the two women handcuffed and at gunpoint while conducting their search. Police never identified themselves. Hillman made two subsequent trips to an emergency room for heart problems related to the raid. Police had the wrong address.”

And that’s one of the tamer examples. For 40 pages, readers get case after case of American police behaving badly—brutalizing and killing people, refusing to apologize, often blaming the victims and penalizing survivors. Another thing Balko noticed was the cops’ disturbing tendency to kill canines whether or not they attacked. Balko, who loves dogs, was deeply affected by this. “America’s law-and-order populace,” Balko wrote in the libertarian magazine Reason, which he would shortly leave Cato for, “may not be ready to condemn the practice of busting up recreational pot smokers with ostentatiously armed paramilitary police squads, even when the SWAT team periodically breaks into the wrong house or accidentally shoots a kid. I mean, somebody was probably breaking the law, right? But the dog? That loyal, slobbery, lovable, wide-eyed, fur-lined bag of unconditional love? Dammit, he deserves better.”

According to progressive critics Mark Ames and Yasha Levine, Balko wrote all of these things for partisan reasons, simply a piece of his “long career inside the GOP think-tank network.” In fact, his “current incarnation as a crusading journalist focused on criminal justice abuse”—as a senior criminal justice writer for The Huffington Post—“is but a recent twist in Balko’s career as a GOP public relations flak.” Yes, I’m pretty sure they typed those words with a straight face. They claim to give readers of NSFWCORP and AlterNet “a broader understanding of where Balko comes from,” but manage to get things so staggeringly wrong we would be better off simply consulting his Wikipedia page.

Ames’ and Levine’s reading of Balko puts the crazy in a crazy quilt of associations. He is connected with Karl Rove, Jeff Gannon, James O’Keefe, Grover Norquist, Ralph Reed, Mitch McConnell and Pinochet, among others, with the flimsiest of connective tissue. And don’t forget the Koch brothers and ALEC, perpetual punching bags of the lazy left. Reading Ames and Levine, you wouldn’t know that Balko has won actual journalism awards for his writing or that a lot of the current stories calling police abuse into question have their roots in Balko’s journalism, including his new book Rise of the Warrior Cop, which features storm troop-looking police from the 2012 Republican National Convention in Tampa, Florida, on the cover.

But let’s back up and consider Cory Maye, a black man from Mississippi who was convicted of killing a cop and sentenced to death in 2004. Maye was sitting on death row when Balko ran across his case as part of his research on police raids. Maye’s case troubled Balko, so he wrote about it incessantly on his own website and for any media outlet that would publish him. Balko found Maye’s story that the raiding cops never identified themselves and that he only fired at them in defense of himself and his young daughter convincing, given all the similar cases he was encountering all across the country. Today, Maye is a free man thanks in no small part to Balko’s obsession.

Maye’s case put Balko on the map and is thus vigorously contested by Ames and Levine. All claims that Balko should get “credit for ‘saving a man’s life’” are said to be a “rather tawdry and shameless bit of self-promotion that doesn’t hold up under scrutiny.” Yet it’s their case that is weightless. “Balko took up Maye’s cause in December 2005”—or right around the time I pounded on his door—“nearly two years after Maye was sentenced to death,” they write. His interest “coincided with a new ALEC model ‘Stand Your Ground’ bill in Mississippi’s legislature” and anyway, “Balko took up Cory Maye’s cause for Cato at the same time that Eric Holder’s law firm Covington & Burling swooped in with half a dozen lawyers and took over Maye’s defense.” The law firm’s role is now “all but forgotten, while Balko’s role blogging about Maye has been turned into legend.”

There was only one problem with that potted history. Lawyer Bob Evans, who with the help of Covington & Burling did manage to get Maye off death row and eventually secured a manslaughter plea with time already served, wrote to Alternet to correct the record. C & B only became aware of the case because a lawyer there read about in on Balko’s website, he explained. In fact, “The very first that I ever heard about the prospective involvement of C & B was when Radley called me and inquired about whether Cory and I would be willing to accept pro bono legal help from a very prominent Washington, D.C., law firm.” “Without Radley,” Evans bottom-lined it, “yet another innocent black man on a Deep South death row would have been executed for a crime he did not commit.” If that’s partisan hackery, we need more partisan hackery.