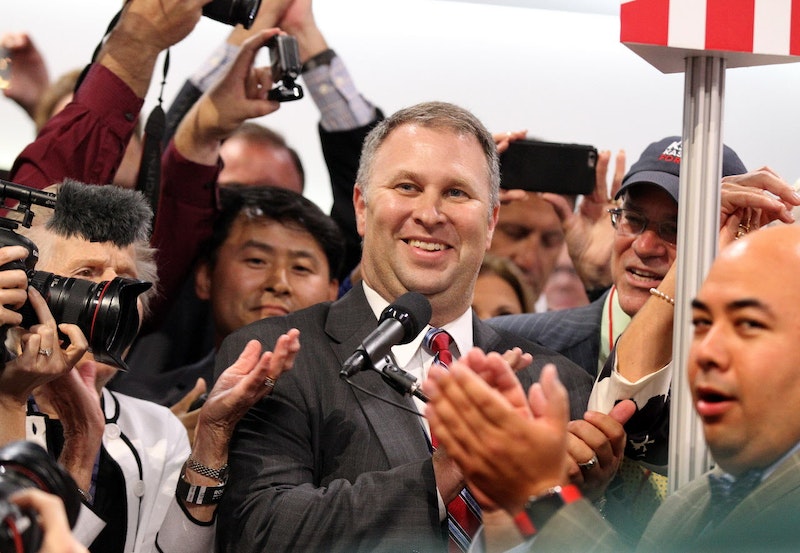 On Monday he told off Donald Trump. On Wednesday he talked to Politico. On Saturday Trump took his vengeance. This vengeance was a huge pout, delivered in the form of a flunky’s letter. Now the Trump campaign isn’t speaking with the chairman of the Republican Party in Ohio.

The chairman, Matt Borges, had been quoted in Politico this way: “‘You are the person who put these people in this position,’ Borges said he told Trump, describing himself as ‘pissed off.’ ‘You did that. Not them. These are your words. You need to own that.’” He meant the pussy tape and the trouble it’s caused honest Republicans up for election.

Borges said Trump answered, “Okay, okay.” But not a real okay, a noncommittal one. Next came the letter, which was written by Bob Paduchik, director of the Trump campaign in Ohio. The letter’s addressed to the central committee of the Ohio Republican Party. Yet the letter throbs. It accuses the chairman of “duplicity” and an “apparently insatiable need for publicity,” and it pronounces the GOP’s presidential nominee “very disappointed.” A quote: “Mr. Trump told me, ‘This is why people have lost faith in the establishment and party leaders.’ I have to agree with him. Too often some leaders of our party have been quick to bail on candidates and principles; it’s why our nation is on the wrong track.”

The letter was accompanied by what the Columbus Disptach called “a 14-page packet of stories featuring Borges questioning Trump’s candidacy.” I must admit these stories don’t include the Politico piece. But I stick to my idea that the piece was a last straw. As noted, the Politico article appeared Wednesday. The next day Trump was in Ohio and he took steps. “Trump and Paduchik discussed what to do about Borges on Trump’s jet as they flew Thursday between campaign appearances in Columbus and Cincinnati,” the Dispatch says. (Having decided about the letter, Trump disembarked in Cincinnati and told a rally that Hillary Clinton’s a criminal and she’s going to jail, and also that there were 7,000 people waiting to get into the rally. The Springfield News-Sun counted “about 100 people outside” and said “more than half of the upper section of seats were vacant.”)

Ohio’s the swing state where Trump’s been polling best. Early voting just started there. Pinning down the letter’s import isn’t easy—the papers say the campaign “disassociated itself” from Borges, or “renounced its relationship” with him—but the effect can’t be good. “I just can’t see the sense in this,” says a county chairman, who adds, “I am at a loss to analyze the logic behind it.”

Paduchik, the man who signed the letter, was in charge of carrying Ohio for George W. Bush. He did so twice, in 2000 and 2004. That is, he was crucial to making somebody president and keeping him as president. Now he takes dictation when Trump wants to go “So there!”  The county chairman, the one who can’t see the sense, observes, “I’m disappointed. But, you know, sometimes you get so close to the sun that it blinds you.”

The situation has a final touch. The Dispatch: “the Ohio GOP has picked up the tab for numerous Trump campaign workers in the state… If Borges now balks at continuing covering the payroll, Paduchik asked the central committee members to direct him to meet the obligation.” Borges and the state party have been covering the salaries of various Trump workers in Ohio. I suppose this could include Paduchik’s salary. Having shaken his fist and declared defiance, Trump wants to make sure the money keeps coming in. He’s like the teenager who hates the bourgeois life but collects his allowance, or like the voters of Alaska with their fiercely independent acceptance of federal handouts. Borges says the party will keep doing what it has to do for the ticket.

Why did Trump act the way he did? For an answer, I resort to an unnamed Republican congressman musing on the nominee’s recent denunciations of Paul Ryan, the Speaker of the House. “Of course he’s going to react that way,” the representative said, meaning Trump. “He’s an idiot.”

Hillary Clinton leads in enough other states that she doesn’t need Ohio. Trump has to win it.  Right now PollTracker puts him four points behind in the state. In 2012 Romney lost there by three. Finally, I note that Borges, the state GOP chairman, spent seven years as lead advance man for Dick Cheney. I think he and the county chairman and the fellow who carried Ohio for George W. Bush—especially that fellow—are really getting what they deserve.