There’s no likely rapprochement between Clinton and Trump supporters. 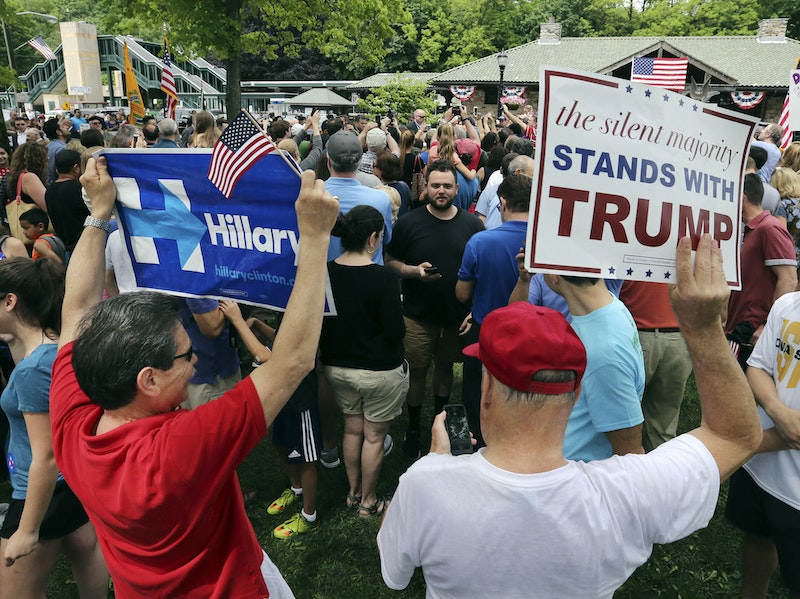 Less than three weeks to go, and already this presidential campaign is the dirtiest and unseemly that I’ve ever experienced. The tenor of the election is getting raunchier, rivaling rumors of Grover Cleveland’s illegitimate daughter, Thomas Jefferson’s mixed-race children, and Andrew Jackson’s bigamy. Both major party candidates’ net unfavorable ratings probably account for part of this, but the major thrust of most current elections is the dynamic of negatively defining your opponent vs. a positive self-definition.

While there may be a minority of supporters who are truly excited by their candidate, the vast majority of Americans—including myself—are more seduced by the allure of voting against a candidate they loathe rather than for one they love or admire. Does anyone believe a politician’s campaign promises? Do slogans like “Make America Great” or “Stronger Together” possess any tangible meaning?

To the Hillary Clinton supporters, or the Hilbots, Trump represents a contemptuous objectifier who screws over women, minorities and small businesses. Michelle Obama refused to mention Trump by name when she spoke out against his appalling comments on women. The vitriolic rhetoric directed against Muslims, Mexicans, and anyone who opposes Trump has risen to near combustible, climatic levels. Doesn’t he remind you of a creepy relative who leers at woman and makes inappropriate remarks at a family function?

To the Donald Trump supporters, or Les Deplorables, Lying Hillary Clinton embodies a corrupt official who’s prostituted America for her own benefit. Chris Christie, that paragon of honesty and transparency, led the chants of lock her up when speaking at Republican National convention. Like an aphrodisiac, the mere mention of Benghazi, emails, Whitewater and Monica Lewinsky titillate the imaginations of Trump supporters. How Clinton can twist and shift her explanations and rationalizations amazes. Doesn’t she kind of remind you of the volatile relative who will explode at an unintended (imaginary) provocation?

Friends on opposite sides of the political spectrum have stopped communicating. It’s like polar opposites in politics with few respecting the opposite side, a yes-no, black-or-white, yin-yang dilemma. This incompatibility between the two sides seems irreconcilable. The friction, the palpable tension needs some form of release. Are the two sides forever to be frustrated?

Fuck no. If we view this election as less about President of the United States (POTUS) and more about the most Corrupt Official (Hillary Clinton)/ Contemptuous Objectifier (Donald Trump) in the United States (COITUS), then intercourse may begin.

Scoff if you will, but how often have you heard the nation is fucked if either Hillary wins or Trump wins? You probably heard Clinton and Trump referred to by vulgar terms for their genitals. If you need a more politically correct translation, then just listen to half of what the candidates’ supporters say on cable news. Imagine the exhilaration in the Clinton campaign when tape arose of Trump saying he can grab women by the pussy. Do you need a decoder to understand what the references to Trump’s hands meant?

When the campaigns have managed to avoid the gutter, each has raised valid concerns about the other. Does Trump possess the necessary temperament to govern where compromise and restraint are assets? Does Hillary have the honesty to lead the country or serve her own self-interests?

Both campaigns have failed miserably in dressing up examples of privilege, entitlement and inauthentic people who’ve not presented a vision for what kind of nation aspires to be.