Trying him for hate speech will make him a hero. 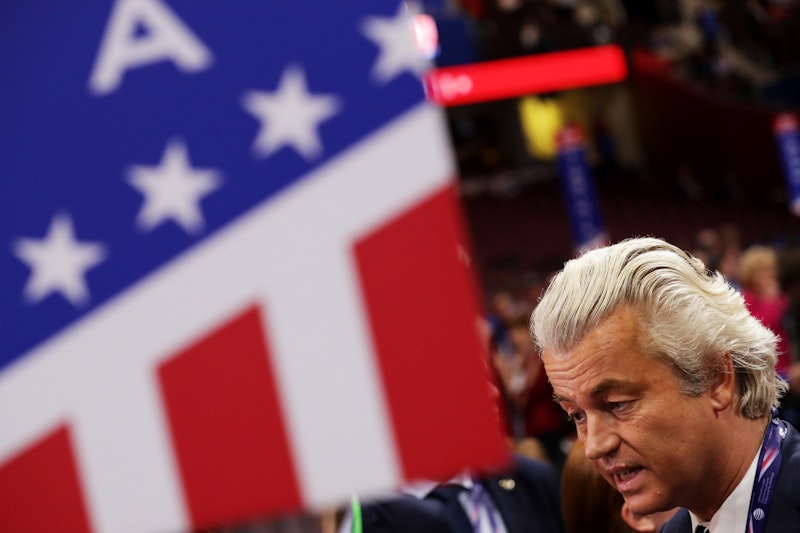 At a March 2014 election gathering in The Hague, controversial Dutch politician Geert Wilders, leader of the Party For Freedom who’s compared the Qur'an to Mein Kampf, asked the crowd whether they wanted "fewer or more Moroccans in your city and in the Netherlands?" The answer was a loud “fewer,” and Wilders assured them he'd take care of it.

After the speech, 6,400 complaints were filed, and Wilders was put on trial for “hate speech” violations. The trial was suspended, but a judge just ruled that it can now be resumed. The court date has been set for October 31.

This is déjà vu for the platinum-haired firebrand. After being tried and acquitted for inciting hatred in 2011, after calling for the banning of the Qur'an in the Netherlands and the deportation of “criminal” Moroccans, his popularity skyrocketed, making him the point man in the Dutch ”free speech” movement. Now he's presented with another opportunity to achieve “hero” status by the very law that's supposed to be keeping him down.

“Prosecuted for what millions think,” is how Wilders reacted on Twitter, which can't be denied. There's no guiding plan behind the mass immigration throughout Europe, and many residents aren't comfortable with the results. Wilders also noted publicly that current Dutch Prime Minister Mark Rutte had told Dutch people of Turkish descent who refused to assimilate to “fuck off back to Turkey,” and that other prominent politicians have said equally insensitive and offensive things without prosecution.

The Dutch criminal code prohibits public intentional insults, as well as verbal, written, or illustrated incitement to hatred, based on race, religion, sexual orientation, or personal convictions. After World War II, many European countries passed hate speech laws aimed at containing the sort of propagandistic expression that eventually led to the Holocaust, but free speech advocates are concerned these laws are now manipulated for political purposes.

Wilders doesn't see Islam as fitting into the traditional framework of “religion.” Not one for understatement or sugar coating, he’s called Islam an inherently violent, totalitarian ideology with the ultimate goal of making the non-Muslim, Western nations submit to it. Islam does, in fact, mean “submission,” and its canonical texts make it clear that non-believers are lesser human beings than Muslims, so his concerns can’t be entirely dismissed out of hand.

While Wilders is labeled as an extreme right-winger, he's stated his desire to avoid any association with Europe's more fascistic and openly racist right-wing movements. Describing himself as a “right-wing liberal,” he’s said that he has no problems with law-abiding Muslims who don't advocate for Sharia law or jihadism. He wants the Dutch state to help these Muslims assimilate, but the others he wants forced out of the country.

For his outspokenness, Wilders has paid a great price. Ever since an assassination attempt on him and Muslim apostate Ayaan Hirsi Ali in 2004, he’s had to live under 24/7 police protection, residing in a safe house and wearing a bulletproof vest in public. His personal life has been destroyed. Wilders has a dystopian vision of his nation if current policies are continued. By 2025, he claims, one out of every three children born will be Muslim. Convinced that the ideology of Islam is not compatible with modern Western values and that it’s intolerant towards individual groups such as women, gays, and Jews, he’s sure that the demographic changes in the works will insure that Dutch society moves backwards.

Wilders may become PM of the Netherlands at some point, if he can put together the right coalition. Obviously many support his views. Some think he can he stopped by controlling his words, but he's already proven them wrong once. Anyone who thinks a conviction in this case will deal a major blow to Wilders’ ideas is delusional. Diversity’s seen by the left as a moral virtue. Those pushing back against this new progressive article of faith are routinely called racists and bigots, setting the stage for a politician like Wilders, a rare one who doesn't care what names you call him.

If the Dutch government thinks that the demographic changes regarding religion (not race) Wilders predicts will yield a positive outcome, it should explain explicitly what it’s doing to make sure that immigrants know what's expected of them when they arrive. The government should also develop a better plan to integrate immigrants into society, so they don't have to figure out this difficult task all on their own. Wilders didn't just come out of a vacuum. He's a symptom of a problem that the government's implicit in. Prosecuting him for hate speech is counterproductive.