Tenacity over truth is her secret. 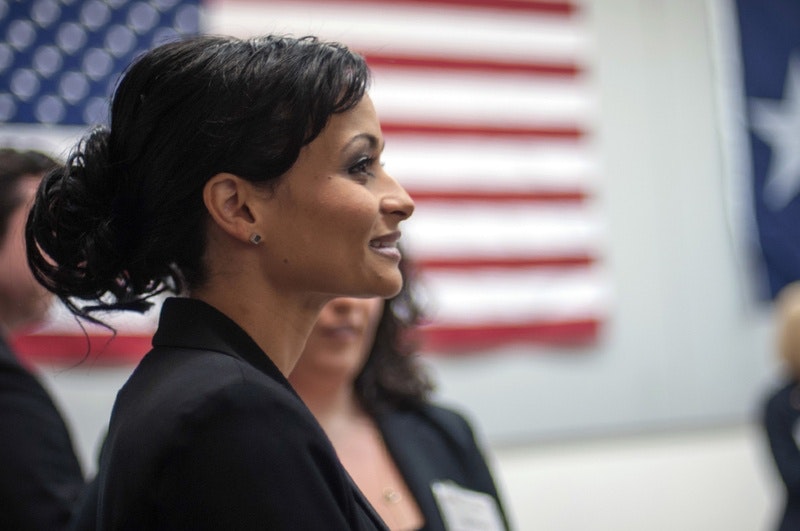 The pot was stirred again for Trump on Thursday, most prominently when The New York Times published an article detailing his inappropriate touching of a woman on a plane in the 1980s, back when Trump would fly on commercial airlines. His accuser said their meals had just been cleared when Trump raised the armrest separating them and set about groping her breasts and trying to get his “octopus” hands up her skirt without invitation. A female journalist also revealed that Trump had forced his tongue down her throat during a People magazine interview at his Florida Mar-a-Lago estate, and a video of Trump saying he'd be dating a particular 10-year-old girl in another 10 years was also released.

The call was quickly placed to bullet necklace-wearing Trump spokesperson Katrina Pierson. The Trump campaign had somehow decided that the best initial defense was to establish that, on the flight in question, there were only fixed armrests in first class, proving that the accused was lying. Pierson went on CNN and detailed the case, speaking confidently of 1980s-era aircraft like DC-9s, DC-10s, 707s, and L-1011s as if she were an expert in aviation history. She'd have been more convincing arguing that the molestation had been caused by in-flight turbulence.

As the theater of the absurd played out before the cameras, the other three panelists could barely contain their ridicule. Journalist Peter Beinart was laughing. He asked Pierson, who once claimed the American people are “tired of seeing left-wing reporters literally beat Trump supporters into submission,” if she wanted to spend the next few weeks trying to pretend that all the women coming forward were lying, but that was the wrong question. It's not about what she wants to do, it's about doing what she's asked to do. Pierson is as dependable a soldier as you'll ever find on the campaign trail.

Dependable doesn't mean she’s always good, but polishing the turds Trump regularly hands her can't be easy. The campaign's pretty much fact-free at this point—as evidenced by the debate—so what's really needed is just someone willing to go on TV and peddle determined-sounding poppycock with a straight face and a thick skin. Flacking for Trump isn’t for the sensitive.

Pierson’s regularly called out on TV but it doesn't seem to faze her. She answers questions she wasn't asked and then talks over the interviewer when called out on it.

There are times when Pierson has been on the verge of making a valid point when her tendency towards hyperbole hampers her. She once told CNN’s Jake Tapper that people who don't want ISIS in their neighborhood are called Islamophobes, and Tapper fatuously lectured her that only “people who hate Muslims” are called Islamophobes. No, people who criticize the ideology of Islam, not specific Muslims, are regularly called Islamophobes as a censoring tactic of the left and activist groups like CAIR. If Pierson had been more prudent with her language, and left ISIS out of it, she could have gotten the best of Tapper and made this important point.

Who else but Pierson could come up with the angle that presidential candidates releasing their tax returns is a “novelty”? When Fox News host Arthel Neville noted that it's been going on since the 1970s, Pierson replied, producing one of her finest “gems” of the campaign, "It's a novelty tradition!" Right up there with this beauty is Pierson’s reaction when asked about Trump's proposed Muslim ban: “So what, they're Muslims.”

People call Pierson a “gaffe machine” (she once said Obama invaded Afghanistan) and wonder why she still has her job, but they might be underestimating her. She was born to a teenage mother and grew up on welfare. Like her or not, she's come a long way in life, especially given that she also gave birth at a young age. There's a tenacity about her that trumps some of her flaws.

She once said that when Trump says you're great and wants to work for you that no sane person would say no, but got this one wrong. Representing a petty and greed-driven man with a lot of skeletons in his closet isn't a sign of sanity. Trump doesn't have the crème de la crème of the talent pool at his disposal because he’s radioactive to so many. That's another reason why Pierson has her job. She's a street fighter with no compunctions about being a hypocrite (she now opposes the welfare that once kept her alive), making her a perfect fit with Trump. People laugh at and despise her, but when you're working for a guy who talks about dating children, you can’t care about what people might think of you.