Let’s Make Sense of the Election 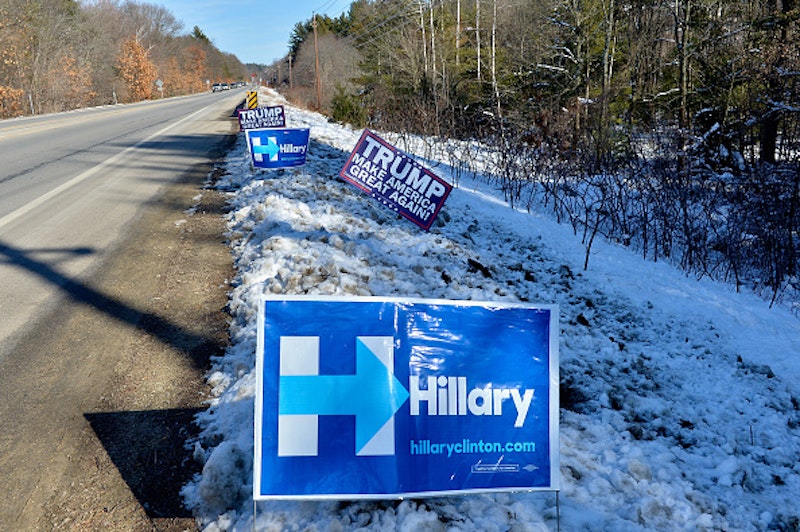 “They said, ‘He invaded her space,’” Donald Trump announced in Florida. “I ‘invaded her space.’” He was discussing what people had said about the second debate and his habit of wandering the debate stage. “Believe me,” Trump said. “The last space that I want to invade is her space.” All right, I thought, a corner has been turned. I figured that next he’d talk about Hillary’s ass. And he did. “She walks in front of me, you know?” he said in North Carolina. “And when she walked in front of me, believe me, I wasn’t impressed.” The Republican Party’s nominee just checked out an ass, that of the Democratic Party’s nominee. The Republican nominee then let us know what he thought.

Trump’s campaign manager, Kellyanne Conway, was upset that anyone might think she was against spotlighting Bill Clinton’s alleged sex victims. “It’s a sexist remark,” she said. “I have been attacking the Clintons for 20 years. The idea that I wouldn’t tell a presidential candidate to shame and blame this woman—and say, ‘Yeah, let’s talk about jobs’—is complete bullshit.” I wonder if she said, “Yeah, let’s talk about jobs” the way Alec Baldwin says, “Yeah, it’s a tough racket” in Glengarry Glen Ross. Talking about jobs and Chye-nuhh is now for girlymen.

Patrick Caddell found a way to talk down hysterical critics of white nationalism. “Breitbart became the voice for populist nationalism,” he told CNN Money. “Some people think that’s a crazy position, but if it’s crazy, then there are millions of crazy people.” Caddell used to be considered a polling genius. When he was 22, he helped one man win the Democratic nomination for president. When he was 26, he helped another become president. When he was 34, he became a guru to the rising star of a new generation of leaders. Of course, these three clients of his were George McGovern, Jimmy Carter and Gary Hart, so the genius didn’t have a knack for picking winners. As he approached 40, Caddell began shopping around for another Democrat, one who could lead the baby boomers in rethinking liberalism for the 90s. Joe Biden took a nibble, but nothing. Meanwhile, Bill Clinton happened. Now Caddell is 66. As CNN Money puts it, perhaps cruelly, he’s a “pollster and political consultant who frequently appears on Breitbart’s SiriusXM show.”

Newt Gingrich warned The Washington Post that House Republicans couldn’t expect a good attitude from Hillary. “Paul Ryan will not be dealing with Bill Clinton. I had a guy I could talk to,” Gingrich said. Then, in the very same interview, Gingrich said, “Next year could be very much like 1998, when we impeached Bill Clinton.” Gingrich described Hillary as “hard left” and therefore uncooperative. The Post article tells the story of how she came to the Senate and made common cause with Lindsey Graham, who had helped impeach her husband a few years before. Graham eventually wrote a piece for Time about Sen. Clinton and how she “managed to build unusual political alliances on a variety of issues” and was “sought out by her colleagues to form legislative partnerships.”

Finally, Kellyanne Conway had second thoughts at the end of the week. On Friday, at the rally where Trump dished about Hillary’s ass, a supporter at the back of the crowd marched back and forth and shouted “Stay on the issues!” (and also “Blacks for Trump!”) Kellyanne, via tweet: “That was me! I was there…” Politico called this “an amazing sign of the exasperation Trump is causing for many of his advisers.” Yeah, let-th talk about job-th. It’s got to be better.