Power of the People In a Single Word

Today’s civil standards, however crude, are made up on the fly. 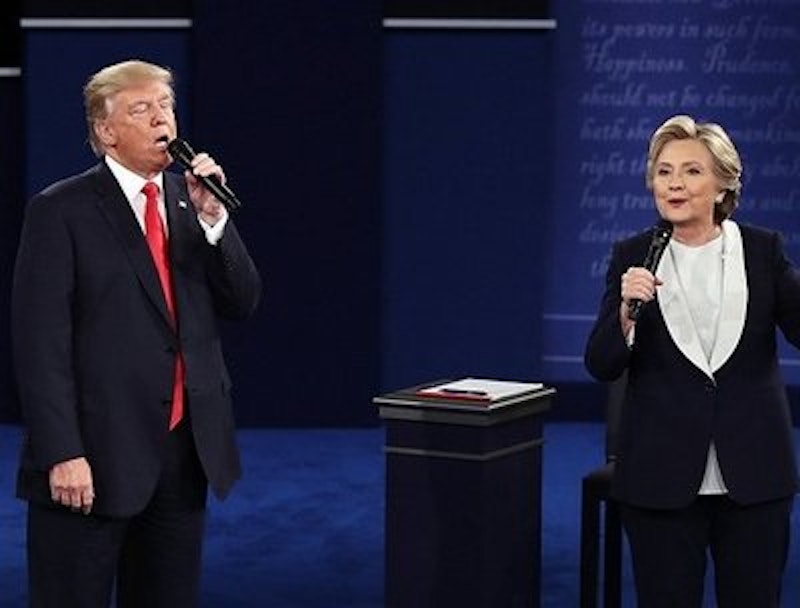 Hillary Clinton doesn’t come off much better. A sampler of how people summarize Clinton includes “egocentricpowerhungrylyingbitch,” “who,” “dishonest,” “reptilian,” “confused,” “spam,” “sir,” “sucks,” “misleading,” “TAXES!!!!!,” “sneaky,” and “president….NOT.” On the kinder, positive side, Clinton merits “senator,” “woman,” “capable” and “president.” And they all appeared before Trump trotted out four of the women that Hillary’s spouse, former President Bill Clinton, has been linked to sexually and prior to the Wikileaks of the Clinton campaign’s internal emails that began to shred Clinton and expose doubts about her candidacy.

The one-word summations are supposed to be the voices of the people, posted anonymously which gives people a false sense of courage as well as mischief, on two separate websites, both titled “Describe (Donald Trump) (Hillary Clinton) In One Word.” The Trump site lists the actual number of postings for each word, and the total—48,3492—as of this writing. This is the phenomenon that the Internet and social media have unleashed, the power of the people in a single word whereas it used to require a mass march on Washington, the ultimate form of participatory democracy, the Agora of the airheads. The great German novelist Thomas Mann observed that “Every well-aimed word carries with it spite.”

The conundrum in the new age of involuntary disclosure and forced transparency is—what’s left beyond the already X-rated presidential campaign? We, the people, and, by extension, the media, have dropped all pretense of civility and censure (except for libel) of thought, word and act. The discourse is, in fact, coarse, and the presentation is raw. But wait just a minute. Sex has reared is ugly but pleasurable head. And judging by contemporary community standards, yesterday’s grope is today’s assault. And that’s the point. This is by no means the dirtiest presidential campaign ever. It’s just more visible and transparent and judged by today’s standards which, in some cases, we make up on the fly.

More important, today news travels at the speed of light and not the gallop of the Pony Express. Consider this: fodder against Thomas Jefferson was that he was having an affair with Sally Hemmings while in Paris and she bore him five sons. Andrew Jackson was accused of marrying a woman who was not legally divorced. Presidents Grover Cleveland and Warren G. Harding were each accused of fathering children out of wedlock, and both quietly arranged support payments. Even Sen. John McCain was rumored (falsely) during his 2000 campaign for president to have fathered a black child. (McCain and his wife, Cindy, adopted a daughter, Bridget, in 1993 from Mother Teresa’s orphanage in Bangladesh.)

No one is amplifying the destructive side of this campaign more than the conspiracy theorists and the wingnuts. Headline writers and columnists have also joined the search for new ways to say old things, and they’re expressing them without leaving much to the imagination. The Drudge Report regularly twins pictures of Bill Clinton and a young black man who claims he’s Clinton’s love child and wants to meet his daddy. Another Drudge headline quoted a woman who claimed Clinton told her that “Hillary’s eaten more pussy than I have.” And occasionally there’s a suggestive headline about Hillary Clinton’s relationship with her sidekick, Huma Abedin. The New York Times joined the bawdy with a tantalizing headline over Maureen Dowd’s Sunday column about Melania Trump’s “pussy-bow” on the blouse she wore to the second debate. (It was explained way down in the column that the phrase referred to the kind of bows that were put on cats during the 1930s. Huh?)

A growing list of women have come forward to claim sexual misbehavior by Trump in varying degrees—kissing, French kissing, groping, butt-grabbing, up against a wall, hand up my skirt, tongue down my throat, “all over me like an octopus” and “touched my vagina through my underwear.” The offended include a reporter who failed to include the incident in her report at the time, an indication of how attitudes toward sexual advances have changed. Today, such errant conduct would be the story’s lede paragraph and headline. The People magazine reporter, Natasha Stoynoff, has since said she feared that a vindictive Trump would’ve destroyed her career. As for actual evidence of the serial assaults, so far we are stuck with he-said, she-said.

Even the religious right is caught perilously between its rigid subscription to conservative Republican orthodoxy and the moral repugnancy of such accusations, if not actual behavior. Trump dismisses the stories as lies and incidents that never happened. As for the Republican Party, Trump appears intent on taking it down with him, and well it should for allowing this departure from common sense to happen. They turned the public against the very government that glues them together.

The transgressions of Bill Clinton have been largely forgiven, if not forgotten, and paid off, except for the protesters who’ve lately disrupted his rallies.  And while the most forthcoming four women offered themselves for a photo-op with Trump, the most maligned of the Clinton conquest, Monica Lewinsky, remains mostly a reclusive background figure. Most reasonable people, given the benefit of the doubt, would conclude that Hillary Clinton should not be held responsible for the appetites and aberrations of her husband. And though she’s been labeled an enabler, she did save a marriage and preserve a family, though these days that might be an out-of-date concept.

Trump is the source of his own momentum. He floats on his own gases. This is a man who described his daughter, Ivanka, as a “piece of ass,” and who remarked over her admirable breasts. He’s on audio and videotape exclaiming his entitlement to sexual advances and favors because of his celebrity. And yet there’s a feeling that if Trump’s puffed-up sense of prerogative were not involved in a presidential campaign, the errant ways of a quarter of a century ago of a rich lothario would be left to the reliquary of time where they belong, as revolting they are. But the Internet and social media will not leave it lay because they are today’s political instant adjudicators. Trump’s threat to sue The New York Times is more defensive posture than court room fact. His lecherous chase is The Times’ case. But some final impressions of Trump from websites that solicit one-word descriptives: “Clown,” “stupid,” “buffoon,” “TWAT,” “joke,” “crazy,” “ignorant,” “cunt,” “obnoxious,” “evil,” “jackass,” “egomaniac,” “moron,” “douche,” ‘dickhead,” “bigot,” “prick,” “asshat,” “Antichrist,” “delusional,” “fascist,” “drumpf.”

The central issue in this presidential campaign has become character and moral fitness to serve in the nation’s highest office. Campaigns and media outlets spend thousands on expensive polls to plumb voters’ feelings about candidates and campaigns. But nothing expresses that sentiment about the two most disliked presidential candidates in history—Trump’s unfavorable are in the 70s and Clinton’s in the 60s—like giving Americans the anonymous chance to tuck it to them directly, in a single spiteful word.