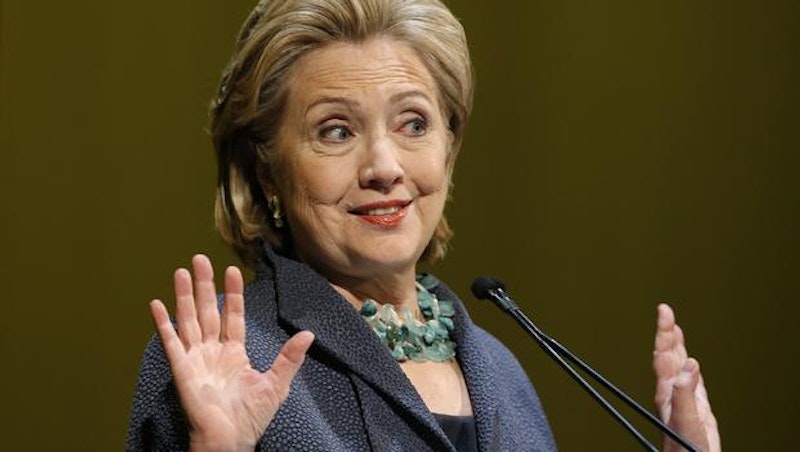 I’m up for a wager. How long, after the midterm elections, will the media begin chewing over the largely meaningless 2016 presidential polls? I say there’s a respite until the Monday after Thanksgiving, and then, the battalions of bloggers who are currently in Senate-control nirvana, will spew out numbers edifying their shrunken number of readers on what it all means. Because, as the Rolling Stones sang in 1974, as the band began its ongoing decline, time waits for no one.

Far more interesting is the onset of anti-Hillary Clinton articles, written by “progressives,” who, conceding two more years of a lame-duck Barack Obama (he checked out earlier than most two-term presidents), and a blustery if ineffective Congress, are calling for Democrats to abandon the coronation of Hillary and at least make the Party’s ’16 nomination worth something by encouraging candidates who don’t have her encyclopedic baggage to batter and bruise her during the primaries.

The most pessimistic of three serious pieces I’ve read in the past two weeks is Thomas Frank’s latest in Salon, in which he examines the similarities between Jimmy Carter and Obama, a comparison he didn’t fully embrace until reading his friend Rick Perlstein’s “vast and engrossing” The Invisible Bridge. Some log-rolling here, certainly—and though I tossed ideology away and enjoyed Perlstein’s first two books, Before the Storm (on Barry Goldwater in the early 60s) and Nixonland, I found The Invisible Bridge too shrill and padded with a catalog of pop culture/ephemeral political events of the 70s—but Frank’s a smart writer and unlike the bilge that defines Salon, his story’s worth reading.

Frank is so depressed about the state of the Democrats that he offers no clues on whom he’d like to see run in ‘16—my guess would be a tepid nod to Sen. Elizabeth Warren—and instead scoffs at his brethren who claim that the GOP will shortly be a hopeless minority party (The New Republic’s John Judis is charitably not fingered) with no chance at ever reclaiming the White House. As he notes, Perlstein wrote that in ’77 some Democratic pundits were “amused” that the “Now Generation,” like Millennials today, would turn Republicans into Whigs.

Frank writes: “We [liberals] persuade ourselves that the answer to the savagery of the right—the way to trump the naked class aggression of the One Percent—is to say farewell to our own tradition and get past politics and ideology altogether. And so we focus on the person of the well-meaning, hyper-intelligent leader [like Carter and Obama]. We are so high-minded, we think. We are so scientific. We are such losers.”

Such a Gloomy Gus! Now, the reality is that sober journalists like Frank will continue to write articles and books—probably more popular should a GOP regime reign—and won’t suffer either financially or professionally, for they are part of the Permanent Campaign’s foundation. In fairness, I’m sure Frank would do cartwheels if a president passed a 60 percent tax on corporations and wealthy individuals, but he knows that won’t happen. So he’s lost in despair, so much so that I’d advise he ditch the politics racket and become a sportswriter or film critic.

The most significant essay on the Democrats, and Hillary in particular, is a 6600-word tour de force by Doug Henwood (erudite publisher of the Left Business Observer—“Stop Hillary!: Vote No to a Clinton Dynasty”—that appears in the November issue of Harper’s. Unfortunately for Henwood, and serious political hobbyists/activists, Harper’s steadfastly retains its paywall, the absurd (for 2014), sanctimonious and anachronistic “Rage, rage against the dying of the light” stance from publisher Rick MacArthur. That’s a shame, for Henwood’s rather dispassionate ticking off of the reasons why Hillary is no friend to progressives, or even middle-or-the-road liberals, might’ve had significant impact on the nascent race had it been available to more than a puny number of readers.

Nevertheless, for those Democrats who’ve been snowed by Hillary’s supposed inevitability, and are already supporting her, Henwood’s article is a grim but instructive primer. Henwood says that pundits “dismissed my queries in rude and patronizing ways,” which makes him a heretic, I suppose, although I doubt that bothers the genial writer. Hillary Clinton, like her husband, Henwood hammers home, has no set of principles other than the advancement of her political career. She encouraged Bill to pass welfare reform in ’96 (cutting off the hapless Bob Dole’s long-shot chance at the presidency, while angering former allies); was complicit in her husband’s embrace of easy money, which contributed to the 2008 crash; played footsie (so to speak) with amoral strategist/pollster Dick Morris; on their first date, the Clintons crossed a picket line at a Yale University gallery’s Rothko exhibition; she was a member of the Rose Law Firm in Arkansas, which represented wealthy clients; was led into the muck of the Whitewater scandal by Jim McDougal, and though the Clintons escaped relatively unscathed, a number of their friends were convicted of fraud; embarked on a cynical “listening tour” of New York when she ran as a carpetbagger in that state for Senate in 2000; attended prayer breakfasts with the very conservative Sam Brownback of Kansas; voted for the Iraq War; and served, without much power, as Obama’s Secretary of State.

Henwood writes: “Unlike the Bush family, an old-style WASP dynasty for all W.’s populist bluster and blunder, the Clintons are arrivistes who approach politics in a highly neoliberal manner. That means nonstop self-promotion, huge book advances, and fat speaking fees (Hillary has now joined Bill in the six-figure club)… And with an eye to the presidency, Hillary has also kept up her line of neocon patter, while carefully separating herself from Obama.”

Henwood, like Frank, doesn’t offer alternatives to Clinton as the Democratic Party’s standard-bearer in two years, and when I contacted him he kept his own counsel on that question. If Henwood’s not completely alienated from politics, I imagine he’ll grudgingly support the Democrat, if only because he considers a Republican Oval Office so repugnant.

Finally, the normally manic Charles Pierce—a left-winger who may not have invented purple prose but is nonetheless drenched in it—wrote a long anti-coronation-of-Hillary piece for the November Esquire (currently not available online) that was quite sedate. (The cover teaser is “Hillary Is Not A Shoo-In.”) His argument is simple: Hillary “clearing” the field of candidates will damage the Democrats in 2016, shutting off debate on issues he considers important. Pierce uses term-limited Maryland Gov. Martin O’Malley as a foil for pointing out (at least he hopes) that challengers will emerge. O’Malley’s not even popular in Maryland, and though he talks a “progressive” game, like Bill Clinton, this is a guy who’s wanted to be president since he was five. In fact, believe it or not, O’Malley’s a cut-rate Clinton.

Although he doesn’t say so explicitly, Pierce wants Sen. Bernie Sanders to wage battle against Hillary. He writes: “Sanders is an independent who caucuses with the Democratic side in the Senate. He is an unapologetic liberal, an actual socialist at a time when the word is thrown around to mean anyone who believes in repairing roads and fighting fires.”

My own hope—and this comes from an entirely different political point of view than Frank, Henwood and Pierce—is that Hillary Clinton doesn’t run, or is defeated by Sen. Warren, since it’ll be easier for a palatable GOP candidate, say Sen. Marco Rubio, to win the presidency. But that’s neither here nor there: expect in the new year a rash of Hillary backlash articles from currently less brave left-wing pundits, and remember that Doug Henwood—most of all—had the balls to say it first.