Did Democrats Get Ahead of Themselves on a Blue Colorado?

Udall and Hickenlooper in trouble. 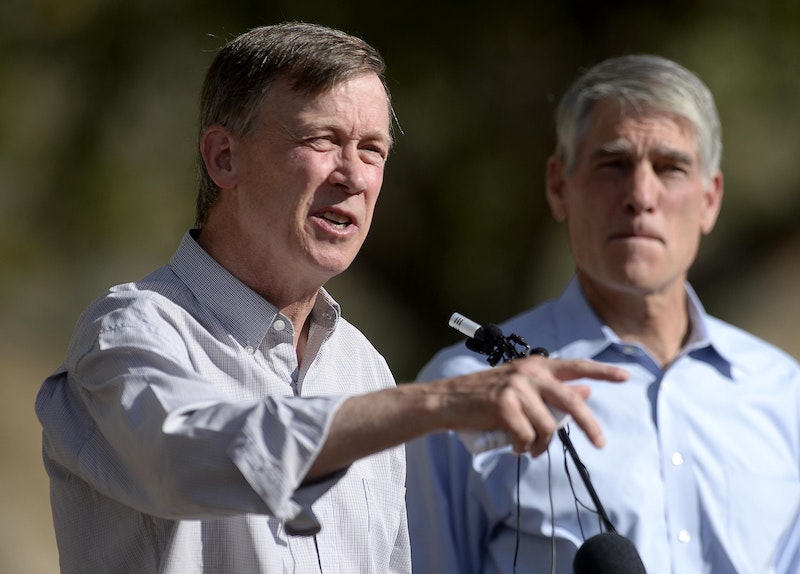 The presidential elections of 2008 and 2012 in Colorado left Democrats jubilant. Not only had they turned a previously stubbornly red Republican state to their side, they’d done so with seemingly a new coalition of young, diverse, liberal-leaning voters that could be replicated elsewhere.

But that was then. Barack Obama’s two Centennial State victories are in danger of being eclipsed by Republican wins this year in Senate and gubernatorial races. That would give Republicans bragging rights about a state thought out of their column, and cast doubt on Democrats’ longer-term electoral advantage nationally.

Udall’s Republican challenger, second-term Rep. Cory Gardner, was considered too far right for the rapidly diversifying state. Democrats tried to bait Gardner with “war on women” attacks, emphasizing his opposition to abortion and what they called his proposed restrictions on contraception. These charges fell flat, as Gardner, 40, skillfully thrust-and-parried against his accusers and presented himself as a mainstream conservative.

Gardner’s also an upbeat type. His near-constant, sincere-looking smile contrasts sharply with the often dour Udall, 62. As National Review noted recently, “Democratic consultant Steve Welchert, who worked for Udall on previous congressional campaigns, explains that Gardner’s 'happy-warrior mentality' has made it harder for voters to believe Democratic attacks." As a result, Gardner is up by 3.3 percent in the Real Clear Politics average (as of Nov. 29).

And the governor’s race looks nearly as close. Gov. John Hickenlooper, a rising Democratic star, is tied with Republican nominee Bob Beauprez, according to the RCP average. That’s remarkable considering Beauprez’s political retread status. Running for governor in 2006, the then-congressman got trounced by his Democratic rival.

Hickenlooper, though, has proven more vulnerable than many expected. The former Denver mayor “has ticked off advocates of legal marijuana for his criticism,” The Denver Post wrote recently. "Republicans claim the governor's inconsistencies and his 'aw shucks, let's just talk about it over a beer' manner are the signs of a man who can't lead."

This gives Republican hope for 2014 and beyond, considering Colorado’s swing state status. “When it comes to presidential contests, Colorado tends to swing from one political party to the other more than the nation as a whole,” according to the 2014 Almanac of American Politics. “It was higher percentages for Democrat Barack Obama and Republican George W. Bush than their national averages, as it did for Republicans Ronald Reagan, Richard Nixon and Dwight Eisenhower, and for Democrats Lyndon Johnson and Harry Truman.”