A prose poem and some media analysis. 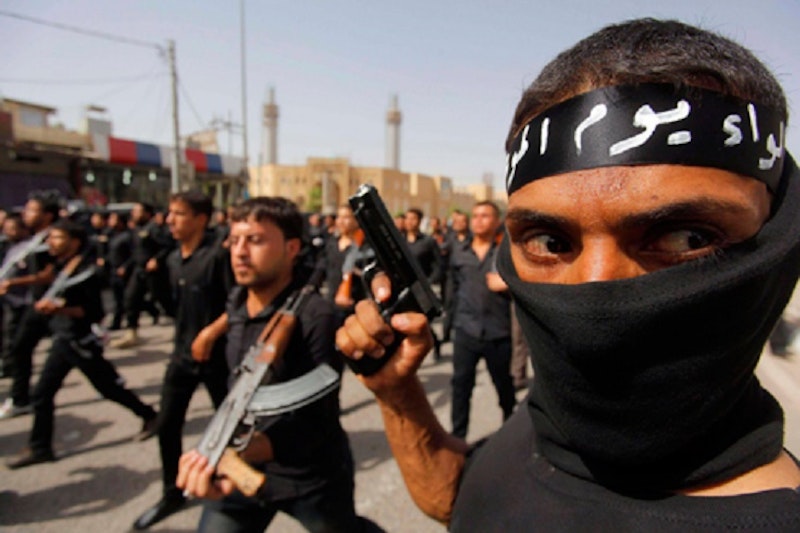 For the past couple of years, the single really good thing about Iraq was that we weren't there. Now that's done. So everyone's feeling a bit hopeless. This is becoming a presidency as anxiety dream. Scrabbling at the Middle East again, raking it with missiles like a psoriasis victim who can't find the spot. Waiting for Turkey to fumble a ground force into place and gradually realizing it's not going to happen, like a date realizing she's been stood up at the restaurant.

Another angle: Obama and ISIS are like the first novelist and his novel. Obama declares a world emergency about this particular menace, and then finds the world considers it rather puny, not full-sized. Member nations examine the rubber snake and shrug. Much as unwilling readers take a look at a first novel.

Turkey's sitting atop ISIS but still considers it a grade-two priority. We're much farther away. If Turkey is so indifferent, why are we so fussed? What does the U.S. view reveal that the local view doesn't? Granted, we don't want to destroy the Kurds, so our vision is unclouded by that drive. But a mortal menace tends to look even more mortal at close range. Local nations didn't flock to us for protection; we had to nudge them. If they really felt threatened, would we be needed at all? They'd be using those weapons they're always buying, and we'd be hopping on the sidelines.

Obama has now made two big foreign policy decisions that strike me as bizarre. First was dragging out Afghanistan, the second is this new round of dicking about in Iraq. It's like a hawk somewhere has something on him. I suppose Obama keeps hoping that the fragments of the nations involved can be propped against each other so the pieces don't fall and populations don't get destroyed. He's being responsible, one likes to think. In his first term he was responsible with the Republicans, and they shmeckettied his face until he sort of learned. Being responsible is what makes liberals walk with a limp. On the other hand… lives.

Media blind spots. Read many articles on one subject and you learn fast that there isn't much in them. The highlighted bits are surrounded by boilerplate and excess wordage. Worse, no impulse toward explanation ever shows. Day in and day out, reporters can cruise past the same gaping questions and never drop a word in their direction.

For example, Turkey hates Assad, the boss in Syria. Turkey doesn't want to fight ISIS until the United States does something about Assad. These facts are presented again and again as fundamentals that help explain the day's events; they're part off the boilerplate. But why does Turkey want to get Assad so badly? Read enough articles and you can find a scrap: Turkey says more terror groups will spring up unless Assad is destroyed. Okay, that's a rationale, but why? Why does Assad being around mean more terror groups, especially since this latest terror group is taking much of his country away from him? And here the brief trail of explanation runs out.

I mean, people know. I bet. At think tanks and so on. But the material can't get a foothold in the news stories. Well, you try running down the daily facts of an ongoing war. But the batch I read through included think pieces, and those were no better: fulmination, more boilerplate. Most of the news and think pieces were from The Guardian and The Washington Post, with one article from Slate. That one, by Fred Kaplan, was by far the most useful.

I am left to guess, and only guess, that Turkey wants to be boss of the Sunni Middle East, and that it wants troubled waters to fish in. As long as it can hold down the Kurds, Turkey isn't on the lookout for threats, just rivals. Assad has a state and a military: ISIS is just issuing drivers licenses. Assad is bigger and therefore must be knocked down, and Sunnis can turn toward Turkey to protect them in the mess that follows. Is that the idea?