If “get over it” or “grow up” is your knee-jerk response, get stuffed. 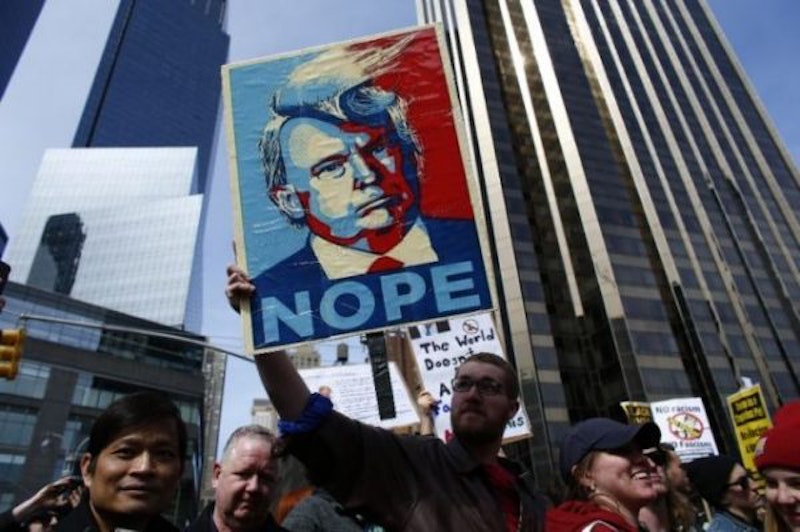 Back in August 2010, I posted the following on my now-shuttered blog, Voguing to Danzig: "We're all adults here"/"Act like an adult" = "I hereby give myself license to act like an asshole in mixed company"

If memory serves, someone said something stupid, and because it wasn’t funny, I was the only person in the group who didn’t laugh, and the offending party’s retort was “we’re all adults here.” On Facebook over the past week, a trickle of Donald Trump voters have been admiringly brave enough to concede “mistakes were made.” More often than not, though, they’re standing firm with rhetorical crossed arms, sidelining the heretofore ubiquitous Hillary Clinton takedowns with begrudging defenses of the new president that begin one of two ways: “get over it” or “grow up.”

This sanctimony is often coupled with an assertion along the lines of “Now you know how we felt when Obama was elected,” which is insane; short partisan brainwashing, there’s little to no comparison between a wholesome, accomplished legislator and a profane, business-failure huckster prone to swapping political positions multiple times in a matter of days. Upholding the status quo and instituting gradual policy changes is not the same as heedlessly upending multiple conventional norms without congressional or departmental input during the first week of a new administration.

It’s ridiculous to be told to “get over” the very real attempts by this president to defund the arts, public broadcasting, women’s health and services protection, and various other government offices. It’s questionable how one can say, “grow up” in the face of a multi-agency gag order, a family-fracturing Muslim ban, an executive order aimed at crippling the Affordable Care Act, and a federal hiring freeze. What I’ve enumerated above is a mere fraction of what’s happened since the inauguration—see also the Goldman Sachs cabinet, the blatant Russian interference, the unsecured email accounts, the missing tax returns—and as far as I can tell, a whole lot of people are totally cool with this state of affairs, much in the same way that they were cool with virulent dog whistles, intimations of violence, shrugging at the encouragement of white nationalist fellow travelers, and so on.

It’s as if, having won the Electoral College, Trump voters caught the inauguration broadcast but otherwise retreated to alternative media or tuned out media altogether. It’s as if they did not personally know, care about, or love any of their fellow Americans who were women, immigrant, LGBTQ or minorities. It’s as if they weren’t especially interested in whether or not the swamp was actually being drained. Worse still, it’s as if they neither knew or were interested in the reality that national elections have wide-ranging consequences, that a national government owned by one party inspires overreach in statehouses across the nation, that extremes surge when a mandate—real or arguable—is sensed.

Spontaneous protests in cities across the country aren’t bedwetting, bellyaching, or sour grapes; they’re the equivalent of antibodies rushing to neutralize an infection. Protests involve citizens who’re paying close attention to what their governments are or aren’t doing, and putting their own bodies in harm’s way in order to make themselves heard in ways that calls, emails, petitions, and physical mail cannot achieve—especially when politicians isolate themselves from the public. Protests mean something; in the United States, protests brought about strong unions, civil rights, and women’s suffrage. At this moment, Minnesota, Michigan, Iowa, North Dakota, Virginia, Colorado, and Washington state, emboldened by the national conservative bent, are mulling legislation that will allow them to bill protesters for damages incurred during protest actions. If you don’t understand that it’s a short hop from that state of affairs to protest bans, I’m not sure what to say to you. If you can’t foresee a day when you’ll need to have your voice heard, I’m not sure that there’s anything for me to say for you.