Democrats: get in the mud and learn from Mitch McConnell. 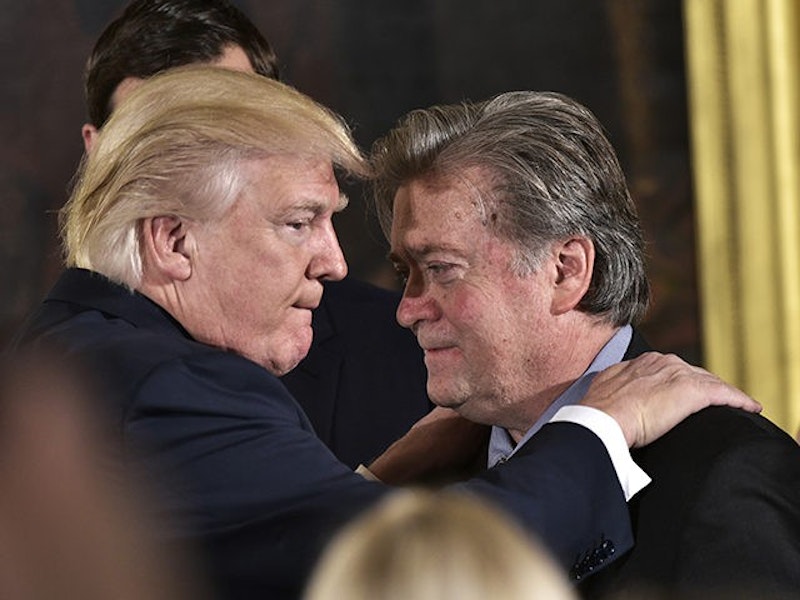 “LET’S STAND TOGETHER AND HALT ECLIPSE OF THE WEST” declared the Drudge Report yesterday, topped with a picture of Donald Trump and Theresa May. This is why I still visit the site: melodrama, blood and guts, piss-yellow journalism, and a quixotic, ever contrarian spirit that had Matt Drudge cheerleading Obama throughout 2008 and spazzing in glee the night that “WORLD IN SHOCK AS TRUMP ON VERGE OF PRESIDENCY.”

A week into Trump’s presidency, after months of bewilderment and flat-footed response, and the Democrats still don’t have their feet on the ground. They will lose again and again unless they adopt the scorched-earth tactics of the Congress that hated Barack Obama so much. Bipartisanship is dead. Democrats need to get in the ring. This is a cage match. The left has a lot to learn from Mitch McConnell and his cohort of shameless “Freedom Caucus” members. The only reason they didn’t consider confirming Merrick Garland for the Supreme Court was because Obama picked him. They gave Obama no quarter and prevented him from pursuing anything but failure and embarrassment. This is the tact that the Democrats need to take with Trump, and that’s why it’s so upsetting to see Elizabeth Warren, Chuck Schumer, Chris Van Hollen, among others, vote to confirm a single cabinet nominee. Get ready to lose if you care about the moral high ground of professional politics. Fight fire with fire, as the President said the other day about ISIS.

By the way, why did everyone declare Trump’s inauguration speech delusional and dark? It was dumb, sure, and full of boogeyman (gangs in Chicago that he’ll surely cull after watching The O’Reilly Factor). It was bleak, but it wasn’t inaccurate: why is it shocking to hear the President invoke “American carnage” when we can barely go three weeks without a mass shooting? Not to mention all the bombs being lobbed in the Middle East every day from our aircraft, while we pat ourselves on the back for holding back those “boots on the ground.” It’s been nearly four months, and the role reversal I predicted on November 9th has played out exactly: the left is just as fervent as the right was after Obama’s election, histrionic and wasting energy arguing whether it’s okay to punch Nazis and how the focus of the Women’s March was problematic.

I hope we can move past regressing into embarrassing Harry Potter references and meaningless invocations of Orwell and 1984, a lazy comparison that doesn’t describe our situation very well at all—we’re closer to Brave New World, everyone too stoned on memes and Netflix and hash oil to, say, run for office or march regularly. We’ll see. I’d love to see another march on Washington on Tax Day to irritate Trump and make some noise about his undoubtedly shady tax returns.

Seven days in, and I’m imagining planes falling out of the sky. How would the Trump administration react to a crisis on par with 9/11? I don’t want to think about it. For now, things are grim enough. And again the specter of autocracy loomed yesterday with alerts from The New York Times about Steve Bannon telling the media to “keep its mouth shut.” The full quote is less terrifying: “‘The media should be embarrassed and humiliated and keep its mouth shut and just listen for a while… The elite media got it dead wrong, 100 percent dead wrong,’ Mr. Bannon said of the election, calling it ‘a humiliating defeat that they will never wash away, that will always be there… That’s why you have no power,’ he added. ‘You were humiliated.’” He doesn’t sound like Darth Vader, or even Dick Cheney—this is a bully who finally won and finds his terminal insecurity intact. The thought of Reince Priebus and Paul Ryan trying to shepherd our coach potato President out of his worst habits reminds me of an old At the Drive-In lyric: “Matadors chase the bull in a china shop.” Bannon is a white nationalist obsessed with genetics, and yet he looks like he has leprosy. Theater, art, literature: it’s all irrelevant when we’re living in an epic comedy of errors. Hence “Not usually a sign guy but geez.” The media and the Democrats are stuck in the mud, and the people need to prop them up or fix it themselves.