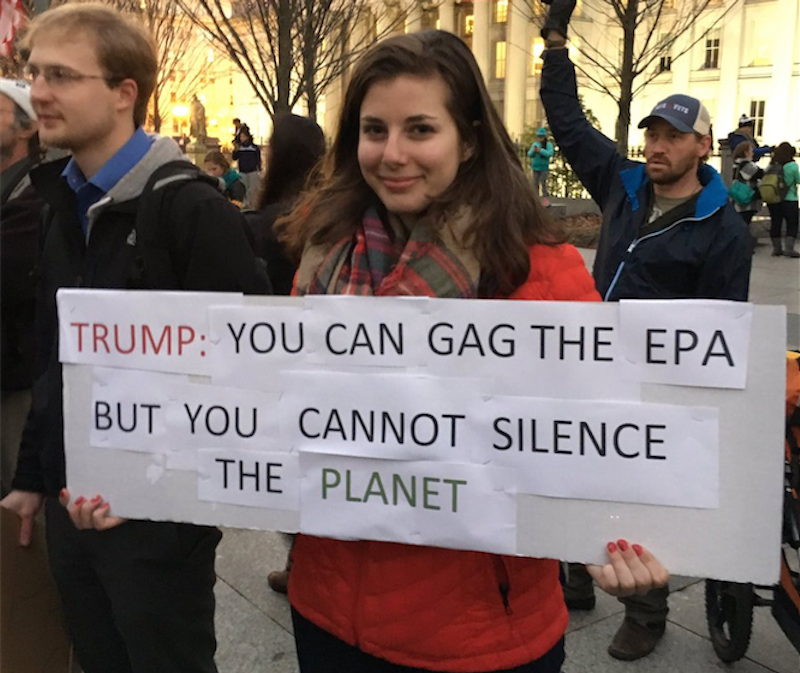 A complete media blackout imposed by the Trump administration has silenced the Environmental Protection Agency, preventing them from posting blogs on social media, barring staff from awarding new contracts, and, most chillingly, sending all press requests and questions to the Office of Administration and Resources Management.

It’s no coincidence this gag order comes after the two executive actions to advance construction of the Keystone XL and Dakota Access pipelines, the latter one the EPA opposed. Trump has promised to slash U.S. environmental regulation as a way to promote oil drilling and the coal industry. The EPA recently released a report warning of the dangers of fracking contaminating U.S. water resources. Are citizens no longer to be availed of basic information pertinent to energy, monitoring of poisons, or pollution and public health?

It’s not uncommon for incoming administrations to put a mild restraint on dissemination of information to the public until the new agency heads are put into place but this blackout is over the top.

“Incoming media requests will be carefully screened,” one directive said. “Only send out critical messages, as messages can be shared broadly and end up in the press.” I’m not a legal expert but where does the Freedom of Information Act come into play? From my understanding, federal agencies under several mandates must comply with public solicitation of information. An executive order can overturn this only in the interest of national defense or foreign policy, neither of which applies here.

Taxpayer money is funding the EPA and also the Department of Agriculture, which received a similar gag order, and taxpayers have a right to the findings of surveys, studies, or scientific information. I can’t imagine what shocking information the Department of Agriculture might possess, although it did release results of studies connecting methane gas emitted from cow manure to climate change. Good to know but hardly anything that Trump would need to tweet about. Agencies aside, the bipartisan Board of Governors, which reviews and keeps checks and balances on the Voice of America, has been dismantled.

Trump has now dispatched two young campaign supporters (one of whom is a former alt-right blogger) to direct the $800 million media effort. Along with many others, I find Trump’s actions frightening. It appears that the first agency vendetta for the new president and his climate denier buddy, Scott Pruitt, has broken out, not unexpectedly, with the agency that’s most at risk from the new administration’s policy changes. Pruitt sued the EPA repeatedly as Oklahoma’s top prosecutor, so it’s not surprising that he’s itching to take a shot at them now. There could be a big role for a few whistleblowers right about now.