There’s only so much baloney one man can repeat. 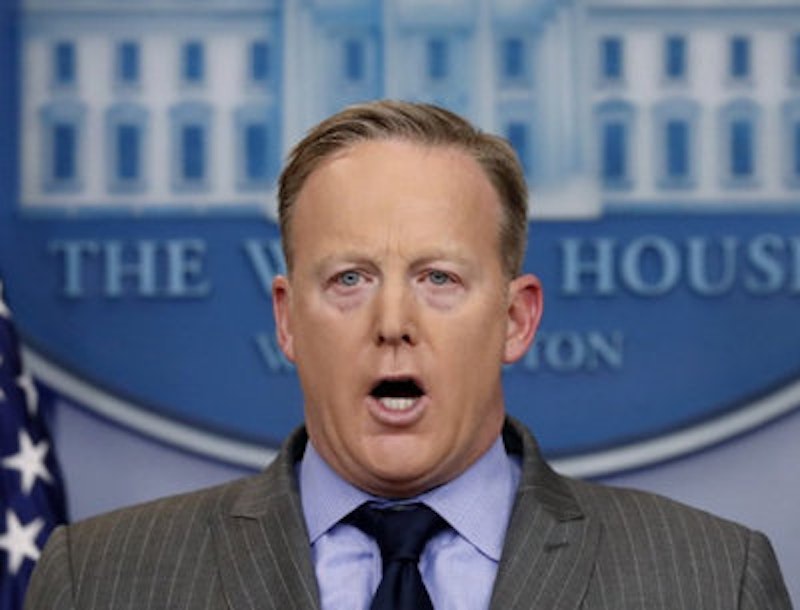 Sean Spicer, the White House press secretary, has had a crash course on the difficulty of serving two masters—the president and the press—and maybe eventually a third, his own conscience. Spicer’s been ordered to defend the indefensible by a president who’s consumed with his popularity above all else, revealing an insecurity that belies his brash demeanor.

It began with a simple declarative statement that President Donald Trump made on his second day in office during an appearance at CIA headquarters: “As you know, I have a running war with the media.” And from there the declaration apparently spread through his staff like a mid-winter flu virus.

White House factotums are usually reflections of the person they work for, in the current case the insufferable and unpredictable Trump. Spicer’s initial encounter with the White House press corps was a disaster that sent fact-checkers into four-alarm panic. Spicer had been ordered to defend Trump’s baseless claim that Trump’s inaugural drew the “largest audience ever.”

Trump speaks in superlatives that are difficult to achieve or live up to. Spicer’s defense of Trump’s claim about being a crowd-pleaser and audience magnet was reinforced by White House Senior Counselor Kellyanne Conway’s equally fanciful statement that the administration had “alternative facts,” to support the assertion for which she was quickly upbraided. Spicer and Conway even disputed photographic evidence to the contrary. In fact, it’s been revealed that Trump personally pressured the National Park Service to produce evidence to support his bogus claim, yet more proof of the president’s authoritarian streak.

As if that weren’t enough, the Trump Administration has floated the seditious idea of relocating the press corps from its traditional White House working space and briefing room to the Executive Office Building next door. Such a move would remove reporters from the scene of the action and the easy accessibility that it enjoys within the White House. Access is the key to information in Washington.

Those fantastical positions, along with federal departmental news blackouts and gag orders imposed by the White House, have triggered a massive revisit to such classic dystopian novels as George Orwell’s 1984 and Aldous Huxley’s Brave New World as proof that the dictatorial future has arrived and resides in Washington. 1984 popped to the number one best seller on Amazon last week.

So, let it be said, right up front, that Spicer is no novice. He should’ve known better. The scrappy and often pugnacious Spicer does not come from a news background. But he does have a long history of working in communications in several capacities and offices on Capitol Hill but notably as communications director and political strategist for the Republican National Committee.

That was all before making the leap to the Trump campaign after the Republican nomination was secure. Spicer’s recruitment to the campaign was opposed by Trump loyalists because he was viewed as an outsider whose interests were not decidedly all-out for Trump. At the RNC, for example, Spicer had been critical of Trump’s position on illegal immigrants and his statement questioning Sen. John McCain’s heroism. And now, it’s reported, those same insiders, Conway, foremost among them, are attempting to undercut Spicer. Spicer’s patron and sponsor is Reince Priebus, his boss at the RNC and now White House chief of staff.

The White House briefing room is a tough room to play. The press secretary’s function is to answer questions and to provide information. Slipping in occasional propaganda is an expected, understandable and an accepted part of the job as those on the receiving end are fully capable of sorting out the shouting-match baloney from the real news of the day.

The podium the White House press secretary presides over is, arguably, the second most important in Washington, after the president’s. The press secretary is the spokesman for the president and the voice of the White House on issues and matters large and small. The daily briefings are monitored by governments around the world. But Spicer, no matter how long his resume and how much experience, has met his match. Many, if not most, in the White House press corps have sharper chops and more experience than he has and are certainly as well, if not better, informed because they live and work outside the White House bubble. And they don’t cater to Trump’s narcissistic whims.

Not having learned his lesson in the dispute over crowd size, Spicer was forced once again to repeat Trump’s unverifiable and repeatedly discredited assertion that he would have won the popular vote—which Hillary Clinton did by nearly three million votes—if it had not been for widespread fraud involving three-five million illegal voters. Trump has said he wants a full investigation of voter fraud.

But watch Spicer tap-dance around the issue when pressed, at the same time offering unverifiable and flat-out erroneous evidence: “The president does believe that. He has stated that before. I think he’s stated his concerns of voter fraud and people voting illegally during the campaign, and he continues to maintain that belief based on studies and evidence that people have presented to him.” No such evidence exists. The National Association of Secretaries of State, whose members certify the elections in every state, has issued a statement saying that no evidence of voter fraud exists. Republican party leaders disagree with Trump. And, for goodness sake, this is an election that Trump won.

Note the subtle shift in Spicer’s tone and inflection, from an all-out first person defense of Trump to laying the responsibility and the blame clearly on the President—“The president does believe that…”

The free flow of information is the music of democracy. Government by Twitter-dee and Twitter-dum reveals a president with the attention span of a gnat whose only interest is self-aggrandizement and not an informed public. And Spicer should remember his role as facilitator and not as an echo. It could be, too, that Spicer is trying to prove his loyalty or even save his job. But his conscience may catch up with him sooner or later.