The Guardian Overheats Now and Then

The newspaper on al-Qaeda's losing battle with a deadly offshoot. 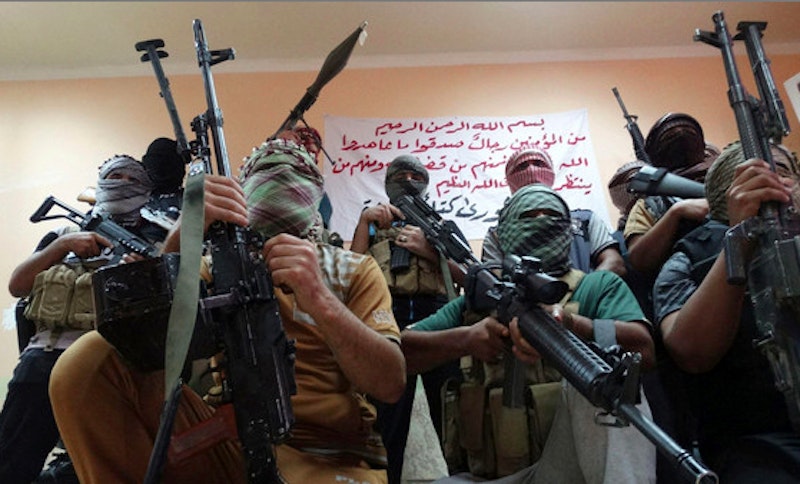 How's al-Qaeda doing with ISIS? Well, an al-Qaeda bigwig was negotiating the release of a Jordanian pilot ISIS had captive. Talks moved along. The al-Qaeda man thought his group and the upstart might be able to work together. Then he asked for proof that the flier was all right. ISIS sent him a computer file but no password. He had to argue with them to get the password—it took “a few days of tense dialogue,” The Guardian tells us. On arrival, the password proved to be this: “Maqdisi the pimp, the sole of the tyrant’s shoe, son of the English whore.” The name of the al-Qaeda man was Abu ­Muhammad al-Maqdisi, and his heart must have sunk. The file, on opening, showed ISIS men covering the flier in gasoline and burning him alive.

Maqdisi is al-Qaeda's “intellectual godfather,” in The Guardian's words. When preparing its lengthy new account on the state of play between al-Qaeda and its monster child, the paper spent a lot of time talking with Maqdisi and his longtime comrade, Abu Qatada, an organizer described by British authorities as a “truly dangerous individual.” The two men are feeling low. Summing up their input, the paper says that, “as an idea and an organization,” al-Qaeda “is now on the verge of collapse.

Maqdisi certainly acts that way. His attempt at freeing the pilot was at least the third time he agreed to be dangled along by ISIS. First he spent a few months getting played by a former pupil while ISIS grabbed what it could of Syria. The ex-pupil had been one of Maqdisi's favorites, The Guardian says. “Some nicknamed him 'Maqdisi junior.'” Now he's crossed to ISIS and become the gang's “chief 'scholar at arms,'” as the paper put it. Conducting talks with his ex-pupil, Maqdisi found that the young fellow bogged matters down with “absurd” objections, “meaningless, insignificant points.” The boy was being snotty; he said his teacher might be growing old and confused. And in the end, it was the ex-pupil who stopped answering. Maqdisi was left there.

The Guardian says that ISIS shifted gears a little later. The group sent messages to Maqdisi, Qatada “and about a dozen other top-ranking clerics,” and word also reached the leaders of the al-Qaeda branches in Yemen and Libya. Come over to ISIS, all these people were told, you'll do all right for yourselves. Offers of up to $1 million were floated for some of the clerics, and the branch commanders were promised $5 million (Libya) and $10 million (Yemen). Where the article gets this from is unclear. At any rate, everyone turned the group down except the man in Libya.

Of course, the handsome offers to the clerics might have been meant to lure them to decapitation. But Maqdisi appears to have hoped they marked a softening. He now sought the release of Peter Kassig, an ISIS hostage. Maqdisi got nowhere, and ISIS soon executed the hostage. Then came the episode of the Jordanian pilot. By the time Maqdisi gave up, al-Qaeda had already excommunicated ISIS and then issued a fatwa against it. In fact, Maqdisi had issued the fatwa, back when the ex-pupil had cut off the first round of talks. Yet the old man got sucked back in, and then a third time. Nothing could break the spell but that password (“the pimp, the sole of the tyrant’s shoe,” etc.) A lesson had to be learned, one that Maqdisi's friend Qatada sums up. “ISIS don’t respect anyone,” he says. (He sounds Mafia, but that may be the reporters translating his Arabic into Brit, which treats collectives as plural.)

None of this would have happened with bin-Laden around, Maqdisi says. “No one used to speak against him,” he remembers. “Bin Laden was a star. He had special charisma.” He believes that al-Qaeda has gone hollow. “There is no organizational structure,” he says. “There is only communication channels and loyalty.” His friend Qatada agrees. The group has a leader, Ayman al-Zawahiri, but no one really has to do what he says. Zawahiri has no “direct military or operational control,” and that's how it's been from when he succeeded bin-Laden, Qatada says. “He has become accustomed to operating in this decentralized way,” the organizer says. “He is isolated.” Stuck off in Waziristan with drones hunting him, Zawahiri can only hope that his followers will act like followers.

Meanwhile, The Guardian tells us, “Donations, which once came in waves of 'hundreds of thousands,' have dried up as donors directed their money to Isis, or else refused to fund further bloodletting between the two groups.” A British intelligence agent, in the newspaper's words, said that “sources in Pakistan’s tribal areas” reported al-Qaeda headquarters was “selling its laptops and cars to buy food and pay rent.”

Easy there. The Guardian overheats now and then. We're told ISIS has built a “global network of affiliates and branches that now stretches from Afghanistan to west Africa and competes with al-Qaeda in its scale.” That's an odd way to use “global,” and the claim of a network is supported in just one place, by this: “In November, ISIS trumpeted public oaths of loyalty from jihadi militants in Egypt, Libya, Pakistan and even Yemen, al-Qaeda’s strongest redoubt. Suddenly, the group’s influence was extending beyond Syria and Iraq, into the rest of the Islamic world.” No mention of West Africa, and no indication of how many jihadis have shifted allegiance, or how much actual control follows from their swearing oaths. As presented in the story, the public declarations were brought on by news of the big offers ISIS had been making to al-Qaeda higher-ups. Conceivably, what happened was that ISIS waved some money in the air and a few hands went up. But The Guardian gives us “affiliates and branches” crisscrossing the world.

Then there's the phantom coup. “According to a series of exclusive interviews with senior jihadi ideologues, Isis has successfully launched 'a coup' against al-Qaeda to destroy it from within,” The Guardian tells us. But ISIS was kicked out of al-Qaeda more than a year ago. Either the article is being very tricky about tense or it's saying that ISIS, from outside al-Qaeda, is plotting something very big that involves moles inside al-Qaeda. “At this moment, we do believe there is a coup d’état under way within al-Qaeda itself,” says the man who warned about donations. Maybe he knows something, but that one quote is the entire follow-up to the article's breathless coming attraction. Meanwhile, “coup” slides into the deck that runs above the article: “The inside story of the coup that has brought the world’s most feared terrorist network to the brink of collapse.” But there “coup” just means the overall struggle between the groups, not some special inside job.

Like the global network, the coup proves slippery. The one thing we can take away is that, by their own account, the old men of al-Qaeda sit by the phone while the group's horrible child does as it pleases.