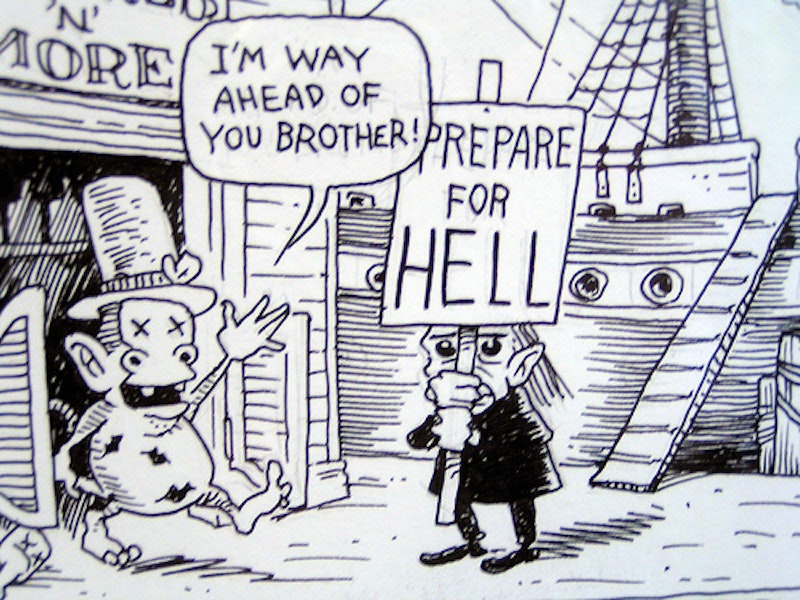 “Maakies” leaving Baltimore’s City Paper was inevitable (one had to die first), but the way Tony Millionaire’s comic strip was shit-canned from the paper last week was depressing. There was no scandal, no blowout, no death threats. Already on thin ice with editors who admittedly never liked Maakies, Millionaire was removed from the paper after 15 years over a strip about a man filing for divorce because his wife is “on the rag.” He’d already irritated most of the staff with a cartoon in January about a man beating his alcohol problem (his friend asks, “What do you mean? You are completely drunken!” The man responds, “Yeah, but you should see my wife!”). Not Family Circus material, but “Maakies” takes place in a bizarre and long-ago hell full of drunks, thugs, thieves, disease, muck and loathing. Misanthropy is what makes “Maakies” run. Instead of letting Millionaire go for getting lazy and redundant in his work (which would be fair enough, keeping something as constrained as a comic strip fresh after 20 years is hard), City Paper rallied around a cause célèbre and declared “Maakies” was misogynistic and “old-fashioned and stupid.”

It’s CP’s prerogative what it wants to publish, but the paper’s smug and arbitrary moralism here is just ridiculous. If a comic strip about “the absurdity of humans, humor, and the horror of being alive,” doesn’t appeal to the editors, that’s one thing. But to cherry-pick two strips about men being awful to women and signal that it’s time to “grow up” as a paper? Give me a break. “Maakies” takes place in a world of misery and pain. The men in both strips are obviously the fools, and if you can’t pick up on that, gallows humor is not for you. Where was the righteous indignation when a reader complained last year about a “Maakies” strip featuring animals being tortured and dismembered? To tout the dismissal of Maakies as some stand against misogyny is absurd, misses the point of the strip completely, and betrays the paper’s mainstream sensibility.

“But if alt weeklies are to survive—and whether or not they will is a very open question—they'll have to stop relying on the same old tired stuff, no matter how great it once was. Times have changed and we can do better,” wrote editor Evan Serpick. That reads like copy from a bank, not an alternative newspaper. The spirit of an alt-weekly is to shoot from the hip, and possess a certain amount of disdain and a loathing for mainstream society, other people, and the media at large.

Obviously I’m biased—it’s in my blood! My dad co-founded City Paper and, after selling it in 1987, started New York Press in 1988. I grew up reading New York Press and spent most of my time immersed in the comics, particularly “The Rehabilitating Mr. Wiggles” by Neil Swaab, “The Perry Bible Fellowship” by Nicholas Gurewitch, and “Maakies.” There’s a thread that runs through these three comics that also defines The Simpsons: recognizing that we’re all in the mud together, and focusing our hatred and disgust with life and human nature at large instead of picking on marginalized people. After it was absorbed last year by The Baltimore Sun, I’m surprised City Paper felt compelled to offer an explanation for shedding even more credibility, but no matter, they’re smugly tut-tutting Millionaire off the deck of a sinking dinghy, and proving it’s never hip to be square.