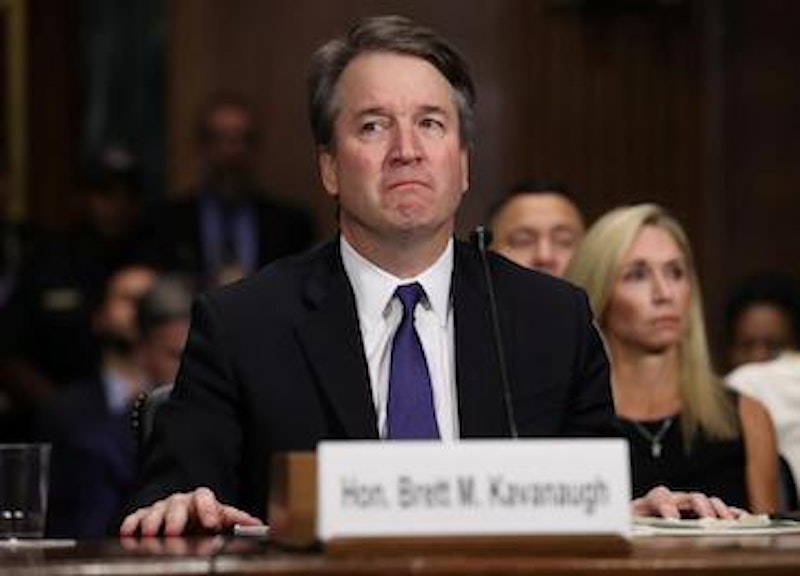 A drunken frat guy might lie about rape—but so might former 1980s/1990s campus leftists. I know because they lied about me, though I didn’t hear about it until a few days ago. Normal people simply aren’t aware how ruthless and averse to the truth the left-wing political elite is.

These people are cold-blooded fanatics, and they get their start in Ivy League schools like Yale, where Brett Kavanaugh went, and Brown, where I went—and where the names of innocent people, apparently briefly including my own—were put on an informal bathroom-wall “rape list,” initially of purported (and quite possibly real) attackers but later, as it morphed, apparently of people (probably ranging from Ronald Reagan to “the patriarchy” itself) who had merely vaguely contributed to attitudes that in the estimation of the left might increase the likelihood of rape.

And that broader, more loosely defined second batch of people included the most libertarian campus columnist, I’m now told, probably because I had the audacity to write columns arguing that due process and accurate statistics are good (as is punishing rape, obviously, though the left pretends only it knows that). Thank you to the unknown leftist with a conscience who, apparently, later removed my name from the list. Unless it was just removed by workers casually doin’ the janitor thing, in which case, thank you to them.

And if you’re confident the left understands the importance of due process and concepts like the presumption of innocence, as an eye-opener check out the rage and protests one professor is getting from students merely for recommending that these principles be remembered.

We’re now seeing ostensibly-smart people loudly trumpet the fact that the concept of due process doesn’t apply outside courtrooms, and that’s technically true but doesn’t mean falsely accusing people everywhere else is a-okay. Consider how the precedent of discarding evidence (and truth itself, in the minds of some radicals) would work out in practice in the long run. If your retort to that point sounds anything like, “But I personally am in pain or am politically fired up right now, so…” then your case against due process is probably as weak as your argument for believing in God or astrology.

If trauma becomes an excuse to discard rationality and respect for the truth, this world will quickly become even more nightmarish.

And there really are intelligent people—in fact, they’re probably more common among the intelligentsia than the general populace—who think politics is sufficient reason to discard truth. Might Kavanaugh-accuser Christine Blasey Ford be one of them? I don’t know, but she has shifted elements of her story around precisely in ways that help her maintain the Kavanaugh-attack timeline post hoc, and watch how completely her claim to have been too afraid to fly unraveled when she was questioned about it last week. She may have the most jet-setting list of hobbies I’ve ever heard.

While some people wonder how much drinking Ford did and whether it’s wrong that she purportedly had sex with over 50 guys before college, I’m more troubled by her ties to an elite school like Stanford, her family’s multiple connections to the political elite (including her brother apparently working with the sister-in-law of Peter Strzok, the ousted anti-Trump FBI agent), and her slightly weird topics of study as a psychologist, which include child trauma and reactions to 9/11—as well as using “self-hypnosis” to recover vital memories and, even more riskily, to “create artificial situations.”

If we agree some people have a shaky relationship with the truth, I’d say we need to consider the possibility she may be on that list.

This isn’t to say I think Kavanaugh is obviously trustworthy, either. On the contrary, I’d say what we have here is quite possibly a clash between what you might call two major b.s.-prone Deep State factions, echoing a clash between two major b.s.-prone Ivy League factions: roughly speaking, the Clinton types and the Bush types, both tied to that locus of evil in the modern world (especially the covert world) called Yale.

That is not to say they aren’t also mortal human beings. Kavanaugh sounds like he was pretty conventionally human when getting into a drunken fight near Yale with a man who was angry that a young Kavanaugh mistook him for the lead singer of UB40 (who does look like a lot of drunk white guys in New England bars). Red red wine indeed.

But I worry that the elite, when they’re being more composed and calculating, have the ability to do Machiavellian things such as summon accusers from decades past as needed and on cue, simply by sending out the signal that it would be politically opportune to do so (left-wing media coordinator David Brock wrote a scathing anti-Kavanaugh column just prior to Kavanaugh accusers entering the spotlight). And once the leftist elite are all on the same page, they have the kind of safety in numbers that makes it easier to maintain, if not outright lies, at least powerful “narratives.”

Take my fellow Brown alum (and fellow comedy writer there, at the Film Bulletin), historian Seth Cotlar. He’s gone viral in recent weeks with an implicitly anti-Kavanaugh Twitter rant that doubles as a defense of Brown’s rape list (the one I now know had at least one innocent placed on it for political purposes, namely me). If Cotlar had merely stopped at defending the occasional need for informal rumor mills, I might have agreed with him—indeed, I’d love it if hashtag campaigns along the lines of #MeToo started outing all sorts of other dark secrets in our society, particularly those of the aforementioned Deep State.

But Cotlar couldn’t stop there and had to construct what I can only call a bizarre revisionist history of Brown University in which the place was dominated, he claims, by conservative plutocrats who continually scoffed at political correctness and raped in their spare time, frightening working-class interlopers such as Cotlar.

Well, I was a working-class interloper in the Ivy League myself, on the same campus as Cotlar, and what struck me is that in my own rural, blue-collar town, I’d never seen such dense throngs of angry Marxists and feminists. Brown, in addition to left-elite luminaries such as JFK Jr., was filled with the kind of hair-trigger psycho-lefties who would, well, put an innocent man on a “rape list” without blinking and who would go on to evolve into (and in many cases probably teach) the “SJWs” of today’s combative campuses.

Cotlar somehow neglects to mention that, for instance, the first name atop the notorious “list” was a very left-wing student steeped in deconstructionism, the then-fashionable French claptrap fusing Marxism, Freudianism, and feminism. That kind of leftist hot air is what dominated discourse at Brown—perhaps especially among the rich, including the students visiting from Continental Europe, of course. If the moral tone at Brown was bad—as right-leaning folk like my young self worried it was—that was precisely because a left-liberal elite with no regard for truth or ethics was very much in charge and did a fine job of morally intimidating other students into toeing the line, even as the Soviet Union’s collapse ought to have been taking the wind out of the left’s sails once and for all.

The elite are truly awful, and one of the first indicators of that for people like Cotlar, Kavanaugh, and me when we were young should’ve been observing the left’s willingness to lie for political ends. Like rape, it’s a terrible thing and it sometimes really happens.