Newspapers plead to be relevant. Why didn’t publishers think of that in 1999? 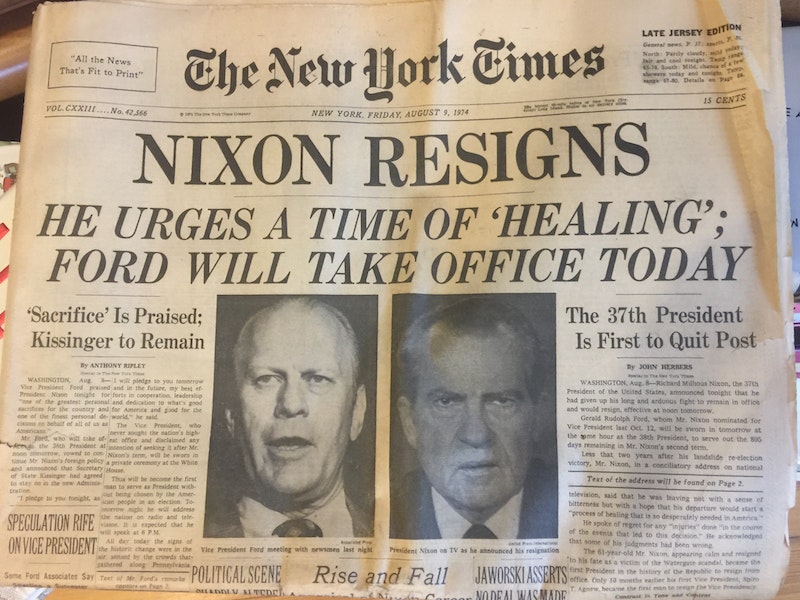 It wasn’t until last weekend that I got around to reading The Boston Globe’s ballyhooed editorial “Journalists are not the enemy,” and, as expected, it was a mind-numbing plea for a “free press.”

I might’ve missed the mass arrest of journalists by the Trump administration in the past several months—so much noise about Russia, Mueller, Crazy Rich Asians, young David Hogg’s crusade against the NRA and people over 25, Aretha’s death, daily polls suggesting that Democrats are bound to have a wham-bam November (if they don’t re-take the House by a substantial margin, then the Party’s in worse shape than already imagined) and Trump’s ongoing bluster about trade wars—but that’s probably not the case. Had The Washington Post’s op-ed columnist George Will, a sanctimonious #NeverTrumper, been placed in a cell next to Paul Manafort—Trump impersonating Woodrow Wilson a century ago—it would’ve led the news cycle for at least six hours.

I did read, on August 14, Jack Shafer’s contrarian article for Politico, “America’s Newspapers Just Played Right Into Trump’s Hands,” and largely agreed with it. (Shafer and I once spent a lot of time together, when he was editor of Washington’s City Paper, and he’s as smart as they come in this business, with a mischievous streak that’s hit or miss.) He wrote: “The Globe’s anti-Trump project is also an exercise in redundancy, not to mention self-stroking. Most newspapers have already published a multitude of editorials and columns rebuking the president for his trash-talking of the press.” Noting that nearly all “major” editorial boards endorsed Hillary Clinton in 2016—you can justifiably quibble over the word “major,” or at least I can, since I can’t think of a single newspaper that has the clout, such as it was, that was flouted imperiously just 20 years ago—Shafer adds, “[Newspaper] sentiment against Trump remains largely unchanged since the election, making the call for a collective reprimand all the more pointless.

(The self-explanatory picture above, fished from my basement, is a 1974 example of when the press really did have an influence on the citizenry, for better or worse, as did the three network evening news shows. Not to mention a time when the big papers were rolling in dough—the first section of this Times is 34 pages—and receiving more employee applications from Woodward/Bernstein youngsters than most Silicon Valley corporations today. And a curio: this was just two years before newspapers switched from an eight-column layout to six.)

Yet Shafer, perhaps overestimating the newspaper-reading public’s interest in this Globe-led protest, was wrong in one respect. Rather than “Trump reap[ing] enough fresh material to whale on the media for at least a month,” the entire exercise was mostly ignored. I think Trump instinctively issued a tweet on the subject, but then moved on. Shafer was, in theory—and it didn’t take a soothsayer to predict this—delighted by the coordinated attack (acknowledging his own Trump-slamming), but otherwise the mass-editorial call to action was a dud.

In fact, it reminded me of Bill Clinton—not long after Newt Gingrich (in his one significant, and it was a big one, achievement) engineered the GOP takeover of the House and Senate in 1994—when the President had to insist at a press conference that he was “still relevant.” As it happened, he was relevant again shortly, first as mourner-in-chief after the Oklahoma bombings, and then, outfoxing Gingrich—just as egocentric as Clinton, but not half the politician—tacked centrist, including gutting welfare (which killed Bob Dole’s longshot ’96 challenge) and remaining popular until he left office, despite Monica Lewinsky.

But that’s politics: newspapers, the most successful of which reaped double-digit profit margins for decades, aren’t important anymore, at least to anyone under 45. And that’ll only get worse for the industry. I don’t think it’s a coincidence that the number of newspaper-related movies has increased in the past 10 years, as Hollywood is milking the nostalgia niche. They don’t make money for the journalists portrayed (some now deceased), but it puts a momentary giddy-up in the step of ex- and present Boston Globe (Spotlight) and Washington Post (The Post) reporters and editors.

I’ll spare you extensive excerpts from The Globe’s quixotic (in the spirit of generosity) Paul Revere moment, but the following struck me as a bit weird: “Trump can’t outlaw the press from the doing its job here, of course. But the model of inciting his supporters in this regard is how 21st-century authoritarians like Vladimir Putin and Recep Tayyip Erdogan operate; you don’t need formal censorship to strangle a supply of information.”

Aside from cherry-picking Putin and Erdogan—what about the leaders of Iran, Saudi Arabia, half of Africa and North Korea?—how is “information” about Trump’s misdeeds (and if pre-presidency cohorts of his flip for the Feds at a trial—instead of just promising to—that would be more trouble than “Russiagate”) being strangled? As Shafer noted, every single day the press attacks Trump, often justifiably, sometimes just to clear its throat, so what’s the beef? Granted, all newspapers have “downsized,” resulting in less fact-checkers and researchers, and reliance on anonymous sources is at an all-time high, but Trump’s not getting a free ride. Back in 1988, Mark Hertsgaard wrote On Bended Knee, which excoriated the media for its chumminess with Reagan; he couldn’t write a similar book today about Trump, mostly because of the media’s disintegration.