Remembering David Hosack, physician and botanist, and his famous friends. 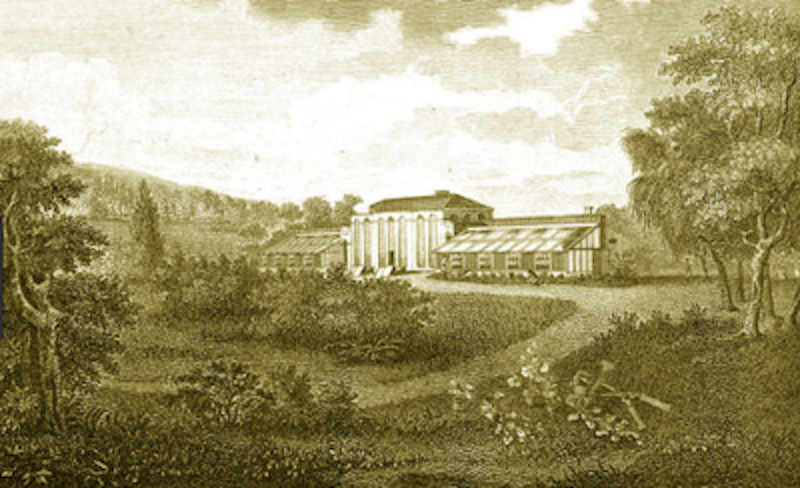 Science “knows not party politics,” wrote physician and botanist David Hosack in 1811. Hosack took his neutrality seriously. He avoided not only aligning with a political party but also taking sides in the political rivalry between his friends Alexander Hamilton and Aaron Burr. He was the doctor who attended to Hamilton at the site of the 1804 duel and at Hamilton’s deathbed a day later. Though stricken by Hamilton’s loss, Hosack maintained his friendship with Burr.

Hosack (1769–1835; pronounced “Hozzick” by his contemporaries) was celebrated in his lifetime but largely forgotten by posterity. American Eden: David Hosack, Botany, and Medicine in the Garden of the Early Republic, by Victoria Johnson, will help resurrect the memory of this admirable man. This absorbing new book recounts Hosack’s life and work, with an emphasis on his creation of a botanical garden in Manhattan for the purpose of developing medicines.

The Elgin Botanic Garden, named after Hosack’s ancestral hometown in Scotland, did not last; its site is now Rockefeller Center. Yet the garden was instrumental in promoting science in the young United States, as Hosack used it to train a new generation of botanical and medical researchers and to spread awareness of science’s potential to improve people’s lives.

Johnson, who teaches New York City history at Hunter College, notes in a recent Scientific American essay that Hosack’s enthusiasm for science was shared across party lines. Hamilton and Burr both had a fascination with botany, as did Thomas Jefferson. Hamilton and Jefferson fought bitterly in the Cabinet but served cooperatively on the board of a natural history museum. That science “knows not party politics” was a prevailing truth in Hosack’s time.

Hosack’s closest friend was DeWitt Clinton (1769–1828), to whom I have a personal connection in that he is a direct ancestor of my wife and son (the latter named DeWitt after him) and who’s the central figure in my book In DeWitt’s Footsteps: Seeing History on the Erie Canal. Clinton served as New York’s governor, among other political posts, and he championed and oversaw the construction of the Erie Canal in upstate New York.

Hosack and Clinton met as students at Columbia University; one was focused on medicine, the other on the law, but they had a similar outlook of wanting to build up knowledge and institutions in the new United States (and to make New York its leading city). They collaborated over the decades in projects such as creating the New-York Historical Society, and Clinton was an important political backer of the Elgin Botanic Garden.

Unlike Hosack, Clinton plunged into party politics, joining the Democratic-Republicans of Jefferson, James Madison, and Clinton’s own uncle, George Clinton, who served as vice president to those two in succession. However, in 1812, DeWitt Clinton broke with his party and ran for president against the incumbent, Madison, with support from the opposition Federalists. He lost and wouldn’t be entirely trusted by either party going forward.

Clinton followed Hosack in being a hands-on naturalist, for example collecting plant specimens as he traveled the potential canal route across upstate New York. When Hosack wrote that science “knows not party politics,” it was in a letter recommending that Clinton be granted membership in the American Philosophical Society based on his scientific work and regardless of whatever opinion society officials may have had of his politics.

Clinton died in 1828, slumping over his desk in the governor’s office. “Hosack,” writes Johnson, “immediately began writing to Clinton’s family, friends, and associates, compiling memories and documents for a biography. At the memorial service for Clinton, Hosack read from these biographical materials at such length that many people in the audience gave up and filed out before he was even half finished, according to one of his medical students. When Hosack published his biography of Clinton the following year, it ran to more than five hundred pages.”

In December 1835, a fire broke out in lower Manhattan, destroying many buildings and shattering a statue of Alexander Hamilton that Hosack and others had commissioned for the rotunda of the Merchants’ Exchange. A couple of days later, Hosack collapsed in his study, where he’d been breathing in the smoky air while sorting through documents showing that the disaster had wiped out most of his investments. He died early the next week.

Historical reputations rise and fall; they fade and sometimes are restored. The musical Hamilton sings of its protagonist, “His enemies destroyed his rep, America forgot him.” Though he was too important to actually be forgotten, Hamilton was getting what seemed less than his due in public awareness and appreciation at the turn of the 21st century, but then a number of events—the 200th anniversary of the duel, the biography by Ron Chernow and, above all, the popular musical itself—have put him at center stage, so to speak.

In my view, neither DeWitt Clinton nor the Erie Canal currently get the degree of public recognition they merit (this was much of the reason I wrote my book), though some improvement has occurred on both these counts as we move through the canal’s multi-year bicentennial (its groundbreaking was 1817; its opening was 1825). Hillary Clinton was known to invoke DeWitt Clinton on the campaign trail.

In American Eden, Johnson notes poignantly that there is, on a low wall along Channel Gardens in Rockefeller Center, an easily overlooked plaque memorializing David Hosack. She has done much with this book to rescue the pioneering American scientist from an ill-deserved obscurity.

More broadly, when you read about prominent figures of early America, such as Hamilton, Clinton and Hosack, you’re left with an elevated sense of what’s possible when people of intelligence and dedication, notwithstanding their flaws and limits, step into the public arena.

Then, you turn on cable news or open Twitter, and you want to vomit.