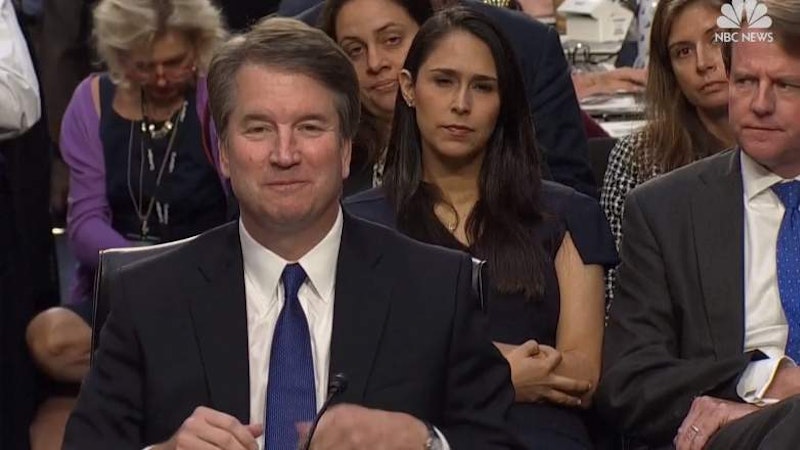 Eva Golinger, whose Twitter profile describes her as an attorney and award-winning author, tweeted an accusation that former White House staffer Zina Bash made a “white power” hand signal while attending the Brett Kavanaugh Supreme Court confirmation hearings on Tuesday. It got 868 retweets before she deleted it after CNN’s Brian Stelter called her out for spreading nonsense. A number of other strident #Resistance figures, including Dr. Eugene Gu (“They literally want to bring white supremacy to the Supreme Court. What a national outrage and a disgrace to the rule of law.”) and Amy Siskind (“What fresh hell is this!!!???”) agreed with Golinger’s hypothesis, which suffers from a veracity problem since Bash’s mother is Mexican and her Jewish grandparents barely escaped the Holocaust. It’s doubtful that white power people like the ones who marched in Charlottesville last August would want anything to do with her, or she with them. Bash has denied making any conscious political gestures, and there’s no evidence establishing that she was.

The hand signal in question is the “okay” sign that everyone’s familiar with. Trump supporters began using it in 2015, and in time people began interpreting it as a “w” (“white”) formed by the extended pinky, middle, and middle fingers, with a “p”(“power”) formed by the joined thumb and forefinger and the palm of the hand.

Any number of controversial right-wingers, including alt-right pioneer and white separatist Richard Spencer, professional provocateur Milo Yiannopoulos, and alt-light Pizzagate conspiracist Mike Cernovich, have been photographed using the gesture. White House immigration advisor Stephen Miller was also accused of doing it while adjusting his tie and jacket, and knee-jerk progressive media outlet Daily Kos bought it even though it was based on pure speculation.

Beyonce and Jay Z have made the hand signal too, but as Cernovich has explained, “Beyoncé used to do it, and some said it was an Illuminati symbol. We started doing it as a joke, and it took on a life of its own." That’s because it gave so many liberals meltdowns, which is great fun for Trumpists trolling to “own the libs.” For the record, the Anti-Defamation League—considered an arbiter in such matters—has declared that the hand signal controversy’s a hoax that was started on the notorious 4Chan website that’s responsible for a lot of Internet mischief.

One of the most self-destructive current traits among progressives is their rush to accuse conservatives of being racists based on little more than gut instinct. That’s reached an acute level now where simply supporting Trump marks you as a white supremacist. Recklessly accusing someone of racism is a serious act of aggression, given the damage it can cause to a reputation. Many progressives have failed to understand that they’ve been acting irresponsibly, just as they’re not able to get why it’s caused so much resentment on the Right. If you try to explain to one of them that Trump’s election victory was partially a reaction against these often false charges, your words fall on deaf ears.

As juvenile and counterproductive as it often is, “owning the libs” has become a favorite Trumpist pastime. Liberals are often earnest types short on humor, making them susceptible to certain gambits. Young, activist conservatives know this and are delighted they’ve found a new stick to poke their adversaries—just flash the okay sign with a grin and wait for the fun to start.

The targets of this ploy, used to receiving automatic positive feedback within their in-group whenever they make any accusation of racism, are slow on the uptake in realizing they’re being played by trolls. Because they bend over backwards to signal they’re the opposite of racists, they’re unable to fathom how anyone could possibly risk being thought of as a racist just to get a rise out of someone.

Democrats need to get savvier. For one, they should learn the art of trolling and how to respond to it. Trolls feed on outrage and starve when deprived of it. The right-wingers trolling know their victims will take the bait because they’re aware of how quick on the trigger they are with charges of racism. They’ve found a way to turn this foible back on their political opponents.

The people obsessing over hand signals, both real and imagined, are appalled by the conspiracy theories conservatives so easily embrace. Ironically, they’re becoming nutty conspiracy theorists themselves—they just lack the self-awareness and humility to realize it. Amy Siskind also deleted her tweet after the blowback (Eugene Gu’s too hardcore to do that), but you wonder if she realizes how foolish it made her look to say that Kavanaugh’s nomination should be rejected (“This alone should be disqualify!!!”) just because his former law clerk, a Jew with a Harvard law degree and a Wharton MBA, touched her thumb to her forefinger and held the gesture for too long to be a random act.