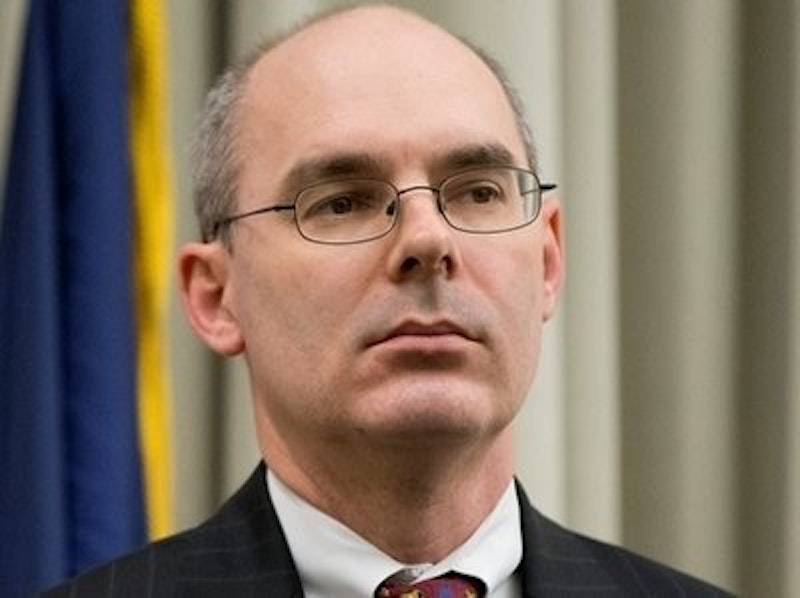 Former Pennsylvania Office of Attorney General’s prosecutor Frank G. Fina may have had a busy day on January 21, 2009, but at 4:56 in the afternoon he found the time to send out 22 inappropriate images from his work email to Lewisburg attorney Jeffrey J. Crossland, some of which were “recommendations” on novel, X-rated ways to evaluate the job performance of female employees. Several of the photos graphically suggested that women are best able please their male bosses while on their knees. Crossland’s response: "You are on a roll today, my man."

“Bulldog” prosecutor Fina is a central figure in the byzantine political scandal in Pennsylvania, now unimaginatively called “Porngate,” revolving around state workers—many of them top officials—circulating pornographic and racially offensive images via their workplace emails. The veteran attorney was an avid participant.

“Private” emails got revealed, however, and heads are rolling. Supreme Court Justice Seamus McCaffery sent porn to state workers’ emails and was forced into early retirement. Pennsylvania Department of Environmental Protection Secretary E. Christopher Abruzzo and a senior aide resigned in October for the same reason. Dozens more state officials have been implicated and there's no telling where the scandal will end. The latest high-profile casualty is Supreme Court Justice J. Michael Eakin, a 66-year-old Republican who was suspended by the state's judicial ethics tribunal on December 22 for lewd emails he sent from a private server to government email accounts under the name of "John Smith."

At the center of the tawdry affair is Pennsylvania attorney general Kathleen Kane, a Democrat and former rising star in the party, who’s been releasing incriminating emails, sent between 2008 and 2012, which contain pornography, jokes about rape and sexual assault, and photos mocking minorities—lame stuff like black people and fried chicken.

Kane, while running for office, got involved in a feud with former attorney general, Republican Tom Corbett, whom she accused of delaying—for political purposes—the prosecution of Jerry Sandusky, the Penn State football coach who was convicted of child sexual assault. Fina was in charge of the state’s case, and he resented Kane’s insinuations. The porn-loving prosecutor sued Kane for defamation in response, and after leaving his job and moving to the Philadelphia District Attorney's office when Kane arrived in office in January 2013, he became a central figure in an investigation into Kane for leaking grand jury information in an unrelated case to the Philadelphia Daily News. Now she's facing two counts of felony perjury, and her law license has been suspended.

What it boils down to is Kane says she was indicted because of the emails she's been releasing, while her opponents countercharge she's using the emails as a smokescreen for her own legal problems. Throw into the mix the fact that some of the emails were sent by Kane’s twin sister (which Kane initially tried to deny), state prosecutor Ellen Granahan Goffer, and things get juicier, especially now that there are allegations that Kane herself was copied on several offensive emails.

Kane went after the second highest elective office in Pennsylvania to clean things up after Republicans had controlled it for over 30 years. The “old boy” club was entrenched—her sister was a prosecutor there and told her all about it—but Kane was going to change that. She then stepped on a rattlesnake named Frank Fina, who is known for his hatred of corrupt politicians and ability to put them in prison. He's widely despised in Harrisburg for his aggressive approach and this pleases him. Fina is like former NBA superstar and “professional villain” Reggie Miller used to be when his team played on the road, savoring boos and insults from hostile fans.

Fina worked his way up to his prosecutor’s job, learning a lot of tricks along the way, while Kane arrived at the top with a lot of grand ideas for change. He was probably the wrong guy to mess with. Letting things get personal could turn out to be the worst mistake she's ever made.

A bunch of overgrown frat boys misbehaving on the job in powerful positions with major power isn’t pretty. There are no winners in here, with plenty of drama still in store. It's just a matter of who loses the least. That person doesn't appear to be Katherine Kane.