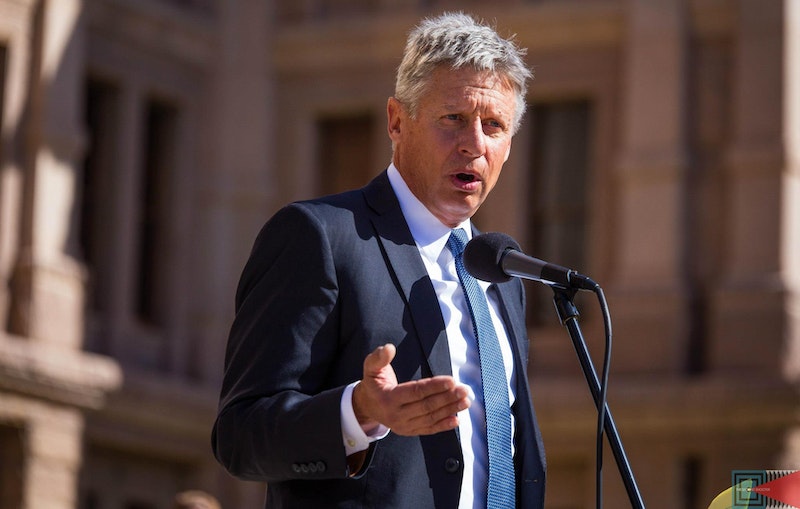 Former New Mexico governor (and former Republican) Gary Johnson officially announced his run for the Libertarian Party’s presidential nomination yesterday on Neil Cavuto’s noon Fox Business News broadcast. Normally, people scoff at the Libertarian Party as it dreams of snagging about one percent of the popular vote. But consider what a strange year this is—and how strange the other candidates are.

I’m no mere impartial observer. When Gary Johnson made an appearance here in New York City, I told him his strategy should be simply to tell America he is neither Donald Trump nor Hillary Clinton, if hypothetically the three of them end up being the choices before voters in November (nothing is certain, and all three of them face primaries).

Normally, I’d be the ideologue insisting that the best service the Libertarian Party candidate can do is just to draw attention to the philosophy, not get too delusional about actually winning the White House. But think about it: if you just forget about ideology for a moment, isn’t the (possible) Libertarian candidate now the best-qualified person in the race? Trump hasn’t held office. Clinton may be fending off an FBI investigation.

Gary Johnson was the very popular, two-term governor—reelected by a majority-Democrat populace even when he was still with the Republican Party—efficiently downsizing the state bureaucracy, and doing it without pissing everyone off. He’s also smart, rational, polite, and genuinely humble (he kept talking about liberty in response to my urging him to just tout his own resume). We’ve needed that combo of experience and sanity lately, as you may have noticed. He also loves both capitalism and marijuana legalization, the sort of policy win-win that neither major party seems able to muster these days, no matter how much it jibes with Americans’ real preferences.

He’s also, for instance, averse to war while making it clear that liberty does not mean passively accepting the imposition of sharia. He’s a reasonable, balanced guy disinclined to inflammatory rhetoric—moderate in tone and approach even when his views are at odds with those of the political establishment. What a relaxing change of pace. He might make America sane again.

I can understand hardcore libertarians not voting at all, and I can understand libertarian-leaning voters waiting to see if mildly sometimes semi-libertarian Ted Cruz wins the first primary in Iowa and stops the Trump juggernaut (or hoping Rand Paul makes a miraculous comeback), but it’s not too early to ask yourself what you’ll do if Trump (or, say, the quite un-libertarian Rubio) and Hillary are your only major-party options come November. Had enough nonsense at last?

And even with Cruz showing signs of life, by the way, it now means watching him compete with Trump (and others) to be anti-immigration. There’s a smart way to be in favor of secure borders, which is to take the term “security” seriously and just focus on stopping terrorists or violent criminals. But Cruz, like doomed Scott Walker before him, is already going the economic-nationalist route in (strange) TV ads, warning of the horde coming to take our jobs. That’s not free-market thinking. Johnson is a successful businessman and a real free-marketeer in addition to being a politician.

Johnson will likely face other would-be LP nominees at the May convention, including software mogul John McAfee and media activist Austin Petersen, but there are advantages to nominating a serious governor who’s run for president once before and who, as a denizen of the Interior West states, understands the struggle between local and federal political power—which might even help bring a sane resolution to numerous underreported land-use disputes like the one in Oregon.

Even if I were a conventional conservative or liberal, I honestly think Johnson would look like a pretty sweet deal to me. I hope we hear from him frequently over the next 10 months and perhaps four or eight years thereafter.