No GOP Establishment Remains to Explode 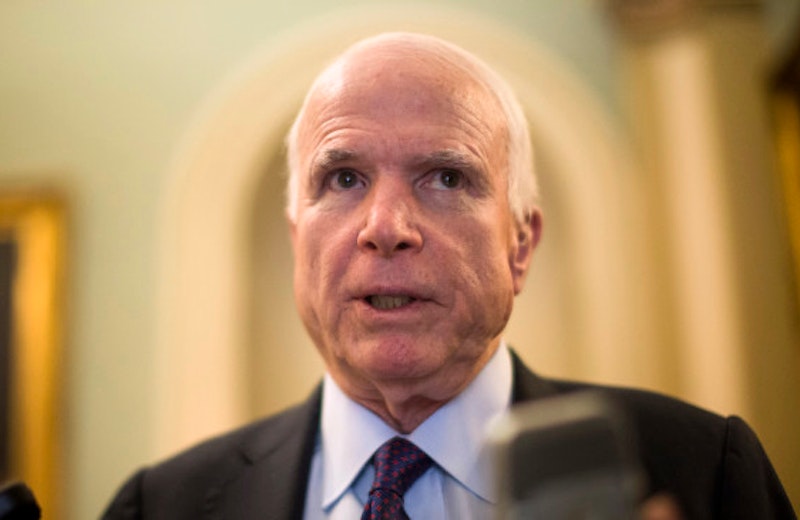 There are few more torturous newspapers articles than a New York Times report on the health of the Republican Party. Almost any political dispatch from the Times fairly smacks its lips when assessing the supposed disarray of the GOP—the paper’s support for Hillary Clinton is littered throughout its pages, from the front page to restaurant or ballet reviews—and the palpable glee from writers analyzing the Donald Trump phenomenon, as well as the less-wacky Ted Cruz prominence, is certainly too rich to read on a full stomach.

On Sunday, Patrick Healy and Jonathan Martin had a front-pager, “For Republicans, Mounting Fears of Lasting Split” that was, typically, shallow and condescending in its description of the Republicans “once powerful establishment” wringing its hands over this year’s very odd primary competition. Quoted in the story was Barry Wynn, “a prominent Bush donor” at an “establishment” retreat in South Carolina. Wynn said, “It’s all really hard to believe that decades of Republican ideas are at risk,” which says less about the Party’s future than his own myopia, backing Jeb Bush, who from the start—despite all the money he raised—had little chance at the nomination, hobbled by his last name, listless campaigning and an organization that doesn’t understand modern media. Also quoted were the Republicans lazy reporters always ask for comment: John McCain, Lindsey Graham and Dick Thornburgh, three old white guys who represent the past. I’m surprised Everett Dirksen or Howard Baker weren’t exhumed to give their thoughts.

And, in describing the popularity of both Trump and Cruz—and how long that lasts is anybody’s guess, since no actual votes have been tallied—the story mentions “lunch-bucket conservatives who expressed frustration with the Republican gentry.” That’s an elitist pejorative, of course, and if working-class Democrats have been similarly miniaturized in the Times I must’ve missed it. And, big surprise, Pat Buchanan, the former Nixon and Reagan speechwriter who ran for president twice himself, is accorded space to repeat his decades-old nativism. The following quote could’ve been recycled from 1996: “The chickens have come home to roost. Putting the party back together again will be very hard after this nomination race. I think the party is going to shift against trade and interventionism, and become more nationalist and tribal and more about protecting the border.”

Here’s the reality: no one knows who’s going to win this presidential election. I don’t think it’s likely, but it’s possible Bernie Sanders defeats Clinton (the “establishment” Democrat who’s raised money from a variety of billionaires, Party loyalists and overseas bigwigs—through the Clinton Foundation—looking to curry favor), and if that occurs, whoa, Nellie, batten down the hatches. And if Trump or Cruz (as opposed to Marco Rubio, more in step with the “establishment”) gets wiped out in the fall, the Republicans will lick their wounds and a re-shuffled Party will emerge, perhaps stronger for the experience. A new “establishment” will be born. And, as I’ve written before, it’s unwise to count out Trump against Clinton (I do think Cruz, not as polished as the New Yorker, nor as adept as reeling in the media, would be crushed), not after his long spell of constant attention, long after most expected he’d implode. There are many Republicans who’d stay home—or vote Clinton—if Trump’s the nominee, but also millions, of both parties, who like his off-the-cuff pronouncements, his sneering at career politicians, who’ll vote for the braggart, but never admit it to exit pollsters and certainly not their friends.

I suspect there will be thousands more articles predicting the death of the GOP—unless a miracle happens and John Kasich or Rubio is nominated—because that’s what the media does. Don’t believe it: four years from now, there will be another competitive presidential race… waged by the Democrats and Republicans.