Crowdfunding platform accuses activist/journalist of actions that could result in deaths. 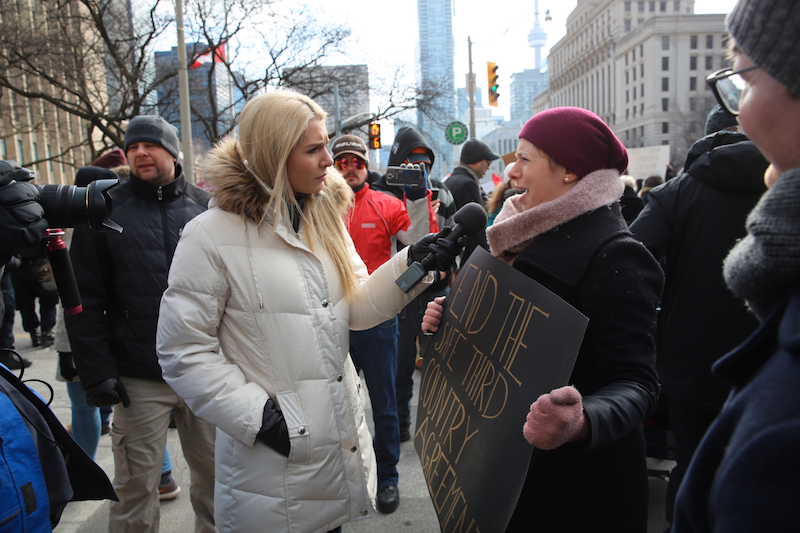 In May, the Italian Coast Guard detained Canadian activist/journalist Lauren Southern, along with activists from a pan-European movement known as Generation Identity for interfering with Aquarius, the so-called “solidarity boat” that ferries people to Italy from the waters off the Libyan coast. Southern livestreamed the incident from the boat, while yelling, “If the politicians won’t stop the boats, then we’ll stop the boats!”

The 22-year-old vlogger’s actions got her a lot of negative attention from the political left, which culminated in crowdfunding platform Patreon banning her on July 21, thus depriving her of the majority of her income without warning. Patreon sent an email to Southern claiming she was using their platform to raise money for activities that “are likely to cause a loss of life,” which she vehemently denies.

What the former Rebel Media reporter’s been involved in on the Mediterranean Sea has two distinct interpretations. Someone on the political left would say that Aquarius and other NGO ships are rescuing refugees from war-torn areas who are in danger of drowning, and that Southern is recklessly endangering vulnerable people by interfering with rescue missions. From the right's perspective, ships like Aquarius are encouraging human traffickers to transport desperate migrants out to sea using unseaworthy vessels, which are often just rafts. Libyan hustlers charge from $750 to $3,500 each for what they sell as passage to Italy, but in most cases they abandon the crafts once they're in international waters. Over 2,700 of these would-be migrants have died this year.

Patreon, which is loosely modeled on the arts patronage system of the Renaissance, obviously bought the left-wing argument. On the right wing in Europe, there's concern that many of these migrants will be denied asylum because they're not really refugees, and then end up on the streets of Rome or Paris. Southern is now embedded on a Generation Identity boat that patrols the Mediterranean with a crew of 25. She's stated that their purpose is to prevent and investigate what they think is complicity between NGOs, human traffickers, and governments to import boatloads of economic migrants and refugees into Europe. Southern claims they will probably help save lives. “The mission is literally working entirely within maritime laws,” she said. And if any of that changed, and if their mission was to harm people or ignore people in distress, I would disavow it immediately.”

Southern claims her role in these efforts is strictly as a journalist. Patreon feels that she's also a participating member of Generation Identity, which does appear to be the case. “If Politicians won't stop the boats, we'll stop the boats,” she's said of the group's efforts. The San Francisco-based firm based its ban of her primarily around a video that shows Southern directing the person steering the boat she was on to cut off a migrant rescue ship and impede its progress. "Get in front. They have to stop,” she said.

That was the line in the sand for Patreon. They made the determination that they'd be helping an activist engage in acts that could endanger lives without bothering to get her side of the story, even going so far as to inform her preemptively that no appeal would be allowed. In other words, Patreon made a political decision, which isn't surprising coming from what appears to be a left-leaning tech firm.

While Patreon has every right to ban someone it disapproves of, the firm's handling of matter was clumsy. One of the guidelines in its terms of service is a concept it calls Manifest Observable Behavior, meaning that if it can be clearly demonstrated that a particular act will cause harm, then it must not be tolerated. It's possible to construct an argument that the NGO boats are an integral factor leading to all the migrant deaths off the coast of Libya this year. People generally aren't going to board a packed raft thinking it’ll take them all the way from the Libyan coast to Italy. If this is the case—and Patreon, which didn't consult with Southern, can’t be sure it isn't—then removing this factor could break the chain and eventually save lives. What’s “manifest” from a video clip is often not what it seems, as any decent propagandist could explain.

If you're going to accuse someone of behaving so recklessly or maliciously that she might contribute to killing people you owe her more than a curt farewell letter. Patreon CEO Jack Conte has admitted the mistake and promised to adjust the TOS policy, but it's odd that he didn't recognize this problem until the backlash came in. It's the sort of behavior that springs from the feeling you're on the politically correct side.

Author and speaker Sam Harris has cited Patreon’s denying Southern an appeal as a factor in his decision to leave the crowdfunding platform. Underlying the complexity of this issue is the magnitude of the political upheaval surrounding the recent mass immigration from the Middle East and North Africa to Europe. The NGO boats are doing humanitarian work, but they're also taking political action by transporting migrants they rescue to Europe instead of back to where they came from.

In the polarized atmosphere this emotional issue has produced, it's easy to get characterized as a white supremacist if you voice any concerns about negative effects on European culture. If you accurately point out that many of the new arrivals in Europe are not actually refugees escaping danger, you may be called heartless. People on the left label the skeptics who aren't thrilled with being part of a grand social experiment as “bad,” refuse to listen to them, and things get even worse. This is what Patreon has done to Lauren Southern.