Jeff Flake and the Fatal Glass of Bullshit

You got to really work those steps. 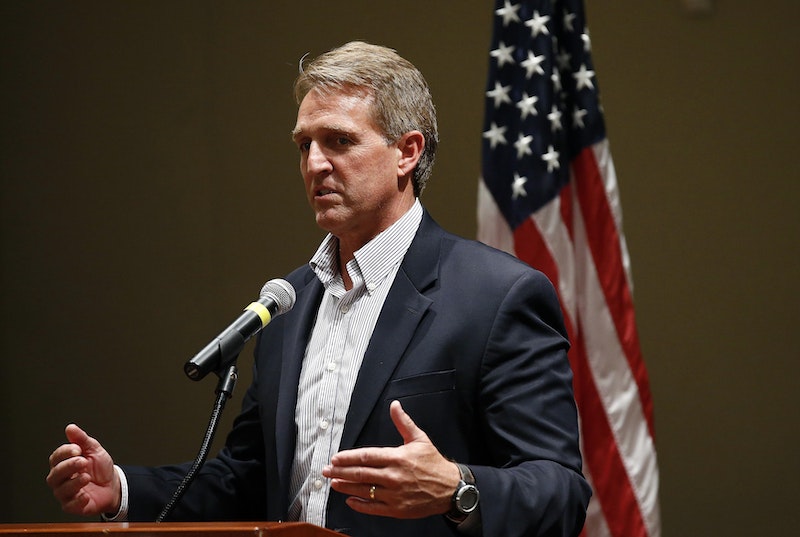 Sen. Jeff Flake of Arizona just published a book, Conscience of a Conservative, telling his fellow Republicans that they’ve gone very, very wrong by throwing in with Donald Trump. An extensive round-up of quotes from his book includes “rank demagoguery” and “I feel compelled to declare: This is not who we are” and “if we lose our sense of objective truth, we lose everything.” (Nice attribution for that last one: “Flake cautions.”) I think he recognizes how dangerous Trump is, and how shoddily the GOP has behaved in the face of his menace. He sort of recognizes—recognizes in a fire-fly way, flickering in and out—that there’s another fact too, a bigger and more ugly fact, a fact that’s big brother to the giant lump known as the Trump Age.

“Any honest accounting of how we got to this new day has to reckon with Newt, whose talent for politics exceeded his interest in governing,” Flake says. He means Newt Gingrich, and I think he’s being demure. Gingrich gave GOP congressional candidates a list of words they should use when campaigning: “pathetic,” “destroy,” “lie,” “threaten,” “cheat,” “steal,” “decay,” and “sick,” among others. The candidates should just work the words in, however they could. Context didn’t matter. Just hype people into thinking the apocalypse was here, then watch them break your way.

This dishonesty and nastiness, rather than Newt’s flamboyance, are the key faults I’d lay to the modern Republican Party. The Trump era grows out of these faults, and out of a basic irresponsibility that enfolds them both. Let’s embarrass Flake with some historical footnotes. Flake on the Trump-era GOP: “We lurched like a tranquilized elephant from a broad consensus on economic philosophy and free trade that had held for generations to an incoherent and often untrue mash of back-of-the-envelope populist slogans.” Sir, the Laffer curve was written across a napkin. Flake waves a quote from Saint Barry Goldwater: “We cannot allow the emblem of irresponsibility to attach to the conservative banner.” Goldwater also said, “Moderation in the protection of liberty is no virtue; extremism in the defense of freedom is no vice.” He said it would be kind of neat to lose the East Coast, and that we should “lob one into the men’s room at the Kremlin.” By “one” he meant a nuclear device.

Nor does the article’s affectionate commentary give Flake much help. “The picture he paints vividly is of a GOP base gripped by grievance and animated more by what they are against than what they are for,” we’re told. Well, that GOP base sounds like the Nixon White House. In fact it sounds like Joe McCarthy and his very numerous Republican friends.

Good luck, Jeff Flake. You’re like a drunk in a bar who’s decided that the problem isn’t drinking but just the drink he’s having right now, and maybe that last one right before. You’re feeling something, but moral clarity ain’t it. That’ll have to wait.