Leaks Are the Music of Democracy 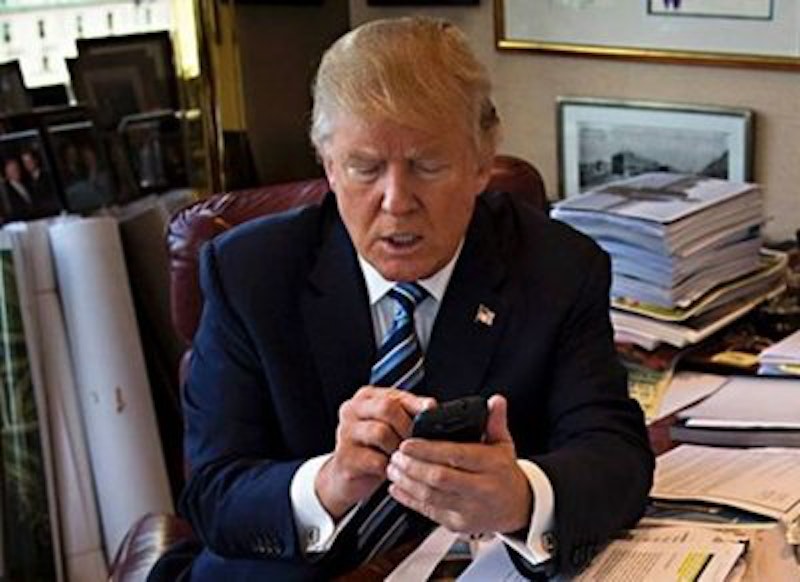 Leaks are the music of democracy. They sing a song of blue skies and fresh air. Leaks are also a touchstone of the news business. Without the leak of the Pentagon Papers, the Vietnam War might never have been cut short. If Deep Throat, alias FBI agent Mark Felt, hadn’t spilled the goods to Woodward and Bernstein, Richard M. Nixon might never have been driven from the White House. Edward Snowden may be a patriot or a scoundrel, but through his leaks Americans learned that their own government was spying on them. Even Mary Todd Lincoln was suspected of leaking her husband’s first state of the union address to a favored reporter, Henry Wilkoff, at the New York Herald.

Leaks can be good or bad and come from within or without. They strike with lethal force, either like a knife in the back or right up front in the chest. In either case, they are driving President Trump bonkers, so much so that his short-term, short-tempered communications director, Anthony Scaramucci, strutting around the White House like a manqué Tony Soprano, intended to fire everyone around him to make certain he snared the leaker(s). Scaramucci was sacked before he could whack the offender(s).

The duel of leaks is a battle of well-placed sources and plugged-in reporters. And nowhere is that daily foreplay more evident than at the nation’s two leading newspaper franchises, The Washington Post and The New York Times. It’s a newsprint battle of tit-for-tat, leak-for-leak between the two papers that have the expansive staffs to blanket a story. Virtually every day is a new case of heartburn for Trump, his staff, and defenders. And with equal deep-breath apprehension is how the tempestuous Trump will react. Last week, Trump tweeted that Attorney General Jeff Sessions is “weak” on leaks. Sessions knee-jerked a news conference to say the Justice Department has intensified its hunt for leakers.

The latest in the back-and-forth is The Washington Post’s publication of a leaked White House limited circulation transcript of Trump’s actual conversations with two foreign officials—Mexican President Enrique Pena Nieto and Australian Prime Minister Malcolm Turnbull. The phone call with Nieto reveals Trump attempting to pressure the Mexican president into silence over who’ll pay for the border wall in an apparent exchange for hush money that Trump will find somewhere: tucked in America’s budget? Trump stated flat-out that Nieto’s refusal to say Mexico would pony up the funds was hurting Trump politically at home and he should end the trash talk.

The White House is the obvious place to mine for leakers. The place has been a sandbox of child’s-play among family and factions. With Reince Priebus gone, and Gen. John Kelly newly installed as chief of staff, things might settle down and the leakers may clam up. But the biggest child of them all is still at play, thumbing random, misinformed tweets that count neither as leaks nor informed policy, but more like tantrums.

The next place to look is obvious, too, having learned from the information pack-rat, character assassin and alleged cross-dresser, FBI Director J. Edgar Hoover. The error-prone Trump’s major mistake was to fire another FBI director, James Comey. In doing so, Trump not only risked the well-regarded Comey’s wrath, but he also demeaned 35,000 FBI personnel (13,598 special agents) who know a thing or two about leaking to get their man, even occasionally protecting and paying to do so. Bad move to antagonize professional investigators, especially when another former boss, FBI Director Robert Mueller, is leading the Russia probe that is engulfing Trump and members of his family and campaign staff. (Mueller’s first reported penetration of the White House was to request the records of Michael Flynn, former National Security Adviser, involving payments from a Turkish company that traces to Russia.)

The special counsel’s workforce is an assemblage of skilled professionals with all the time and money that’s required to investigate possible collusion between the Trump campaign and Russia and wherever else the probe leads them. Usually they’re a tight-lipped bunch who instruct their witnesses to remain silent about appearances but tell them they’re free to talk if they wish. Nobody really knows who they’ve interviewed, subpoenaed, met with in non-descript motels and what records they have or will have—basically whatever they want. Bottom line: Mueller and his investigators are the only ones who know all the pieces and how they fit together.

Now that Mueller has impaneled grand juries, according to reports, subpoenas will begin flying like confetti on New Year’s Eve and Trump’s troubles will double. There’s only one crime a person can commit before a grand jury, and that’s perjury. Knowing about a crime is not a crime; lying about it is.

So, here’s an experienced key to leaks. Everyone who’s involved, or feels threatened, has or will have a lawyer, or lawyers, in Trump’s case, whose only purpose is to save his or her client, even at the cost of others, including in-laws. (Jared Kushner, Trump’s son in-law, has already tossed his brother in-law, Donald Trump Jr., under the speeding bus.)

Lawyers involved in a massive case such as the Russia probe exchange information, talk to other lawyers, schmooze with reporters—all in an effort to piece together the case as it affects their clients. Any decent reporter knows that the best way to penetrate investigative curtains is to check daily with the principal lawyers in a case and eventually the pieces will meld into a story, usually based on tips or leaks. A birddog hunt for a single-source leaker is often a dead-end chase.

And the ripest patch of leakers among all is Congress itself. There are two committees, one House and one Senate, conducting collaborate investigations into Russia’s intrusion into the 2016 election on Trump’s behalf. No one in Washington heads for the microphones quicker than members of Congress. Off mic, and off the record, they are primary sources of information, or leaks, in a town that’s monument-to-monument with whisperers. Congress is proposing bipartisan legislation to prevent Trump from firing Mueller.

A special counsel’s investigation as broad and deep as the Russia probe is maddening and disheartening to an administration. It’s distracting, it creates suspicions and divisions, it turns friend against friend, it diverts energy from positive efforts to defensive actions. In Trump’s case, his agenda is stalled and failing piece by piece, and his wobbly relationship with Congress is steadily worsening as he turns to belittling lawmakers for his own failures and undelivered promises.

Sensing that Trump is drifting and failing to get a grip, Congress is beginning to reclaim some of the power and authority that the executive branch appropriated over the years, i.e., forcing Trump to sign the bill that tightens sanctions against Russia, Iran and North Korea, which requires Congressional approval to amend; declining to reconsider the defeated health care repeal bill; and dithering on lifting the debt ceiling to avert a government shutdown, to name a few. But relief is on the way. Congress is now on summer break and Trump will have Washington (or his Bedminster, NJ, resort) all to himself while its members return home to face the music and the voters’ wrath. Except for the special counsel’s investigation, of course.

Trump seems to be adding to his own misery. In addition to dealing with leaks, Trump is acting as his own counsel—forgetting that he might be smarter than each of the people around him, but he’s not smarter than all of them. For example, it was recently leaked and reported that Trump personally drafted the erroneous statement that was issued by Donald Jr. at the time the story broke about Junior’s meeting with a gaggle of Russians to collect campaign dirt on Hillary Clinton. Such antics only add to the growing impression that Trump is building a case of obstruction against himself.

Another source of information beyond leaks is what reporters actually do—ask impertinent questions to get pertinent answers. But that seems to infuriate the Trump Administration, too.