While We Were Sleeping

The deconstruction of the government begins. 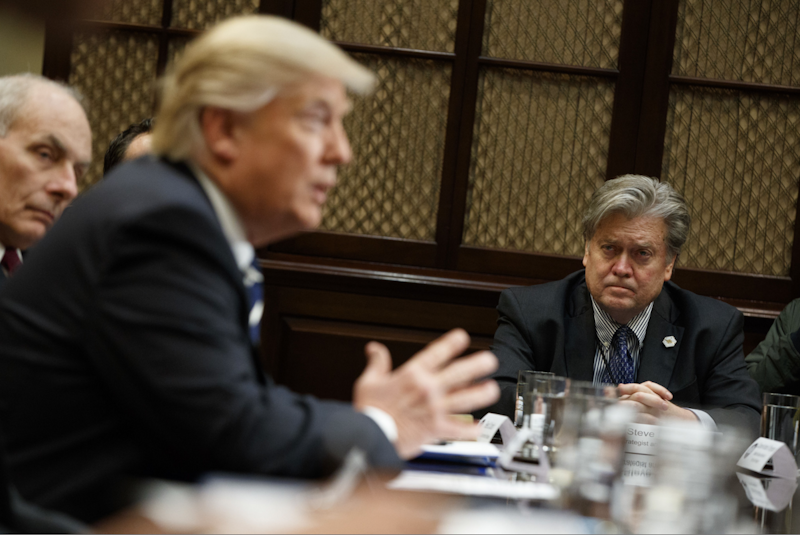 While the American public and news media obsess over the Russia scandal, a lot of national business is happening under the radar. Steve Bannon and his allies are doing what they promised in Donald Trump’s campaign, undermining our democracy and beginning the deconstruction of our government while the public stays distracted.

Many cabinet members were chosen to break down the agencies they oversee. The multi-billionaire investor and climate change denier, Scott Pruitt, spent his life suing the EPA and opposing most federal environmental regulations. He’s now head of the EPA. I was so upset the EPA removed the climate change page on their website, I picked up the phone and filed a complaint. No one answered the general number and a voicemail option wasn’t available. Frustrated, I randomly picked an extension from an automated list and made my complaint to a woman who answered. She said that she was in a financial department but that most of the scientists in the climate change department had been removed or reassigned to other positions. I told her my concerns, and she replied that morale was low and in that in her 30 years at the EPA she had never seen anything like this. I regret not having spent more time talking with her.

Secretary of State and former CEO of Exxon, Rex Tillerson, refused to back the Senate’s move to bolster sanctions against Moscow last month. As recently as this spring, Exxon pursued a waiver from U.S. sanctions on Russia for them to drill in the Black Sea, a venture that was led by Tillerson when he was still heading the company. Some in the State Department say he is pushing to allow the waiver to go through.

Department of the Interior head Ryan Zinke spent his two years in Congress fighting to remove the Endangered Species Act. He voted against the Act, a key law the Interior Secretary is sworn to implement, 21 out of 21 votes. He’s beginning to see his dream realized by taking, for the first time in four decades, the Yellowstone Grizzly and other animals off the Endangered Species list much to the dismay of conservationists. His reckless regard for the Department is shown by his push to allow drilling and deregulation on federal lands and overturning laws that protect many national monuments.

Trump’s voter commission was recently informed that voter roll data won’t be stored with the General Services Administration, an agency subject to privacy regulations, but on White House computers. My home state of Maryland has refused to comply, but some states have. Hundreds of millions of voter records, including social security numbers, will be held in a secret database in the White House. This is an unheard of privacy risk to all Americans including military families.

Trump has failed to fill government positions, including assistant secretaries and top officials. They’re supposed to be the people whose directives and oversight provide guidance to millions of federal employees and contractors. When Trump does announce an appointment, it’s for an individual whose resume doesn’t fit the bill, like multi-billionaire Betsy DeVos or surgeon Ben Carson.

The Democrats should be keeping the Republicans in check, but by giving in to the media frenzy, they’re partially to blame for America’s current mess. Focusing on the long-spun Russian scandal instead of bringing the attention to everything else has consequences.