Bad behavior in private at 16 has made him irredeemable in the eyes of progressives. 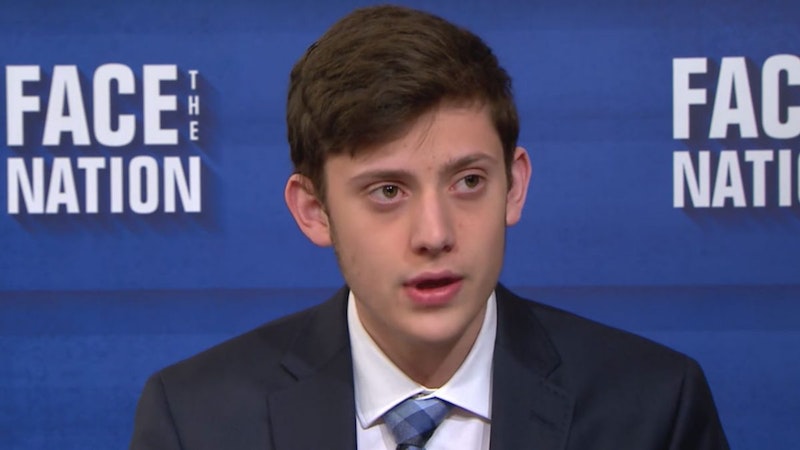 Kyle Kashuv gained national prominence last year as a pro-gun rights survivor of the 2018 school shooting at Marjory Stoneman Douglas High School in Parkland, Florida, which earned him friends on the Right and detractors on the Left, including some of his one-time fellow students. Some of those students have turned on the once Harvard-bound Kashuv by releasing private communications in which he used racial slurs, the worst of which was "nigger," over and over. Word quickly spread and, on Monday, Kashuv announced that Harvard was rescinding his acceptance, despite the letters of apology he's sent the school and made in public, and despite a request that he be allowed to come to Harvard and make his case.

Kashuv was 16 at the time, and his explanation was that he was involved with a group of friends who were trying to shock each other. That happens among youths who have no thoughts that a journalist might someday reveal their transgressive behavior to the general public. It was private correspondence, and it never would've been revealed had he not become a polarizing political figure due to a tragedy he found himself in the middle of, and politics he wasn't supposed to have.

Harvard has no way of ascertaining the context in which Kashuv used the word, so the obvious solution would be to give someone who turned down a free ride at NYU because he wanted so badly to attend their university a face-to-face hearing. Some sort of due process is called for when so much is at stake, unless Harvard's claiming that the private use of a forbidden word is a disqualifier, regardless of the circumstances.

Kashuv said he's a different person after so many of his classmates and teachers were murdered, and that he's "embarrassed by the petty, flippant kid represented in those screenshots." Is Harvard unwilling to even explore the possibility that someone who graduated number two in a large class and who scored over 1500 on the SAT is sincere in his contrition? (By contrast, fellow Parkland survivor and left-wing activist David Hogg had lower scores and was admitted by Harvard.) Remember, this is an institution that's involved in a lawsuit involving its alleged bias against Asian students, for which there's ample evidence, by giving them lower "personal ratings" than African Americans and Hispanics, which is a key component of the admissions process.

During the trial of a case that's likely to make it to the Supreme Court, an email came out from a Harvard dean expressing delight that the children of wealthy donors had been admitted. It's safe to say that none of those students, most of whom probably do not deserve to be admitted, had their private correspondence investigated.

Harvard doesn't want to be judged without being allowed to put up a rigorous defense of charges that it's a racist institution intent on keeping the power among the white race because it knows its reputation's at stake, just like Kyle Kashuv's is now, but it won't let him speak. But perhaps it's too late to say "at stake," as he's already become that guy that Harvard rejected because of "racist" behavior at an age when the brain's not fully developed.

That's not a reputation you want to have as someone just starting out in life. The University's made the decision, not as a matter of principle, but as a matter of public relations, as evidenced by its intractable stance on denying a once-admitted student a shot at redemption. In fact, Harvard doesn’t care what Kashuv has to say for himself. Its main concern is the potential for its students demonstrating and how the media will cover it. Kashuv became a liability who had to be discarded as quickly as possible, which is how it works in the era of #MeToo and call-out culture.

"Gotcha artist" journalist/activist Will Sommer, of the Daily Beast, decided that Kashuv's teenage misbehavior was national news, so he covered it in a May 23 article, ensuring that Kashuv's political enemies would pounce on him. Oddly enough, some of those foes included members of the alt-right who were upset that he'd derided them for their racism and refused to attend events they were participating in.

If Sommer thought he had a national story with his revelation, then why didn't he reveal the names of the other teenage participants in the group Kashuv belonged to? Could it have been that he realized how irresponsible that would've been from a person with a high-profile media presence? Kashuv, however, was dispensable because he's a Second Amendment guy, and Sommer knew that nobody on the Left would object to his sacrifice.

Sommer wasn't alone, however. Other “adults” began sending letters to Harvard in an attempt to ruin Kashuv's life. What's the point? That there's no forgiveness and that nobody can grow? That would be an odd position for Harvard—which has tried to empower former criminals who’ve served their prison sentences by allowing them to matriculate—to take. There were all kinds of ways Harvard could have dealt with this situation, but the Left always wants the maximum penalty these days, regardless of the offense.

Harvard told Kyle Kashuv that it “reserves the right to withdraw an offer of admission under various conditions including…if you have engaged in behavior that brings into question your honesty, maturity, or moral character.” Engage in such behavior at what age? Any age?

Harvard has engaged in behavior towards an entire race that questions its moral character. Behind the scenes, when its administrators think their correspondence is private, they celebrate denying admission to deserving students so they can boost their donations to their already massive endowment.

Harvard's treating Kashuv as an irredeemable bigot, but what it really needs to do is clean its own house. That university has had more influence on this nation for decades than it deserves, and it's become an arrogant, hypocritical behemoth.