Ideologues ask: who will build the roads? 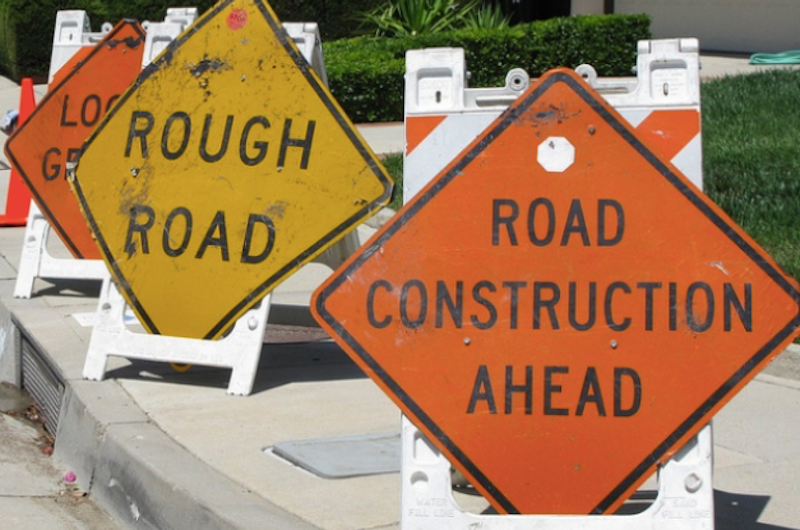 If you write a book that sympathetically treats the idea of abolishing government, you’ll soon discover that online defenders of government love to ask, “Who will build the roads?”

Private organizations can—and do—build roads, sometimes charging modest tolls for their upkeep (there are some private roads in Queens, not too far from my Manhattan abode, and few people would claim Queens is an alternate reality or impossible fantasyland). Anarchists can—and do—even take it upon themselves to fill in potholes when local governments fail to get the job done in a timely fashion.

Still, I think some right-leaning anarchists are a little quick to gloat over their pro-government foes’ obsession with road construction. Many an online thread has come to feature the comment “Muh roads!” as mockery of that obsession. Truth be told, though, numerous political factions become confused or just plain weird when the topic of roads is broached, not just socialists.

People driving on glass roads should not throw stones, and ironically some of the most sarcastic right-anarchist users of the “Muh roads!” taunt have allowed their whole philosophy to revolve around a different sort of road-related question. Culturally right-wing, anarcho-capitalist philosopher Hans-Hermann Hoppe has notoriously defended government-made borders and border patrols (arguably un-libertarian institutions) as second-best options in already government-dominated societies, in part on the basis of the argument that a nation’s taxpayers should be able to decide who gets to drive on public (that is, government) roads they funded.

An ideal system would feature no government and thus no taxing for roads, goes the argument, but pending that immense reform, taxpayers shouldn’t be forced to subsidize the travel of foreign interlopers right up to the taxpayers’ private driveways. On this basis (and to avoid similar poaching of public resources such as taxpayer-funded schools, hospitals, etc.), non-taxpaying foreigners can be excluded from the public property (roads) under analysis, the Hoppe fans say.

Well, all right, sort of. But there are countless areas of life under the current regime into which government intrudes but which libertarians and anarchists do not want to see used as a cheap excuse to exercise still greater control over people. We might agree that sidewalks and parks, while they are government property, will need some rules of conduct, for instance, but we wouldn’t be too happy if the rule ended up being that everyone who walks on them must cite the Communist Manifesto from memory or even do something far more popular and anodyne such as hum Sinatra tunes.

Are right-anarchists sure they want to teach the public the idea that government should get in the habit of deciding who drives where? Have they really thought about where this could lead, so to speak? What if the government decides right-anarchists shouldn’t drive on government roads? Or gun owners or critics of the Department of Transportation? The right to travel, though ideally exercised as a simple function of private property, should be treated as nearly as important and nearly as separable from the big package of contested rights-that-may-or-may-not-exist as speech or self-defense.

It’s vital to be able to get away sometimes, without waiting for government to evaluate your reasons for fleeing (no matter how politically engaged and reasonable these hypothetical aggrieved taxpayers are, and last time I checked we weren’t too sanguine about their ability to control other people or resources via voting). Libertarians and anarchists should understand this better than anyone, and right-wingers who would prefer to go to fun places and avoid “shitholes” should find the idea just as intuitive.

The left gets it, at least in theory. In practice, radical leftists are liable to decide to block traffic if they think you really, really need to be reminded today that “black lives matter” or that international trade agreements warrant protesting. Another BLM, the Bureau of Land Management, is also one of many government agencies that may decide your freedom of movement, and freedom to construct roads, should depend on what you plan to do with nearby trees or grazing land. I think individuals in the market should decide these things, including the market for road construction and operation.

One writer from the so-called “liberal-tarian” faction (libertarian about many things but not eager to abolish the welfare state), Jacob Levy, takes an almost diametrically opposite view from that of the anti-immigration right-anarchists, thinking the ability of people to travel is so important that we need to institute governments if only to ensure that there will be government roads or other means of transportation—to ensure no one gets landlocked by private parcels of land, rendered unable to travel (by purely capitalist means but possibly no less miserable because of it). His position, then, is not so much “Who will build the roads?” as “We must build roads (or other means of emigrating)!”

It would be tempting to take the easy route out of that dilemma (so to speak) by saying that virtually no one would ever attempt to landlock and de facto enslave people, but I actually met one alt-right guy who thought that would be a neat use of all-private land, so we have to keep in mind it could at least in principle happen.

I think the humane way to avoid either sadistic alt-right landlocking or gratuitous liberal-tarian government-creating, though, would be to seek (as always) the tiniest possible deviation from pure property rights that addresses the problem—and it’s a genuine problem, what with the Earth’s surface being finite (as so-called Georgists like to point out, capitalist about nearly everything except land). Even without a government existing, the minimalist law code of anarcho-capitalist libertarians’ dreams could, say, recognize a “right of safe passage” (as has many an older, more traditionalistic law code) that says people have a right to travel on or near pieces of property as long as they make reasonable compensation for any damage done (including general wear and tear).

That is, for a minimal toll (not an arbitrarily large one), you always have the option of getting the hell outta there. You don’t even need a government to guarantee it, so long as private courts (a huge topic for another time) do.

How that rule, in combination with otherwise strong property rights—not to mention the inevitable future growth in personal flying craft that render some of these issues trivial (see: that robot copter thing Uber just unveiled)—would play out in the actual placement of roads (more winding ones, fewer landscape-flattening federal superhighways?) is an interesting, game-theoretical, Tetris-like mental experiment that anarcho-capitalists shouldn’t treat as inconsequential.

But in the end, I think letting the experiment play out in a matrix of real-world property rights and tolls (including, obviously, the use of salvaged, already-existing, formerly-governmental roads wherever efficient) will probably yield far more pleasant effects than, say, the 300 million dead bodies big governments wracked up last century or the $23 trillion in debt our own federal government now carries.

Until we can say with Back to the Future’s flying Doc Brown “Where we’re going, we don’t need roads!” we should at least be able to say “Shut up and drive!” to anyone who pretends roads are a big enough obstacle to warrant abandoning the path to liberty and letting governments carjack a free people.