Whatever happened to the industrial arts? 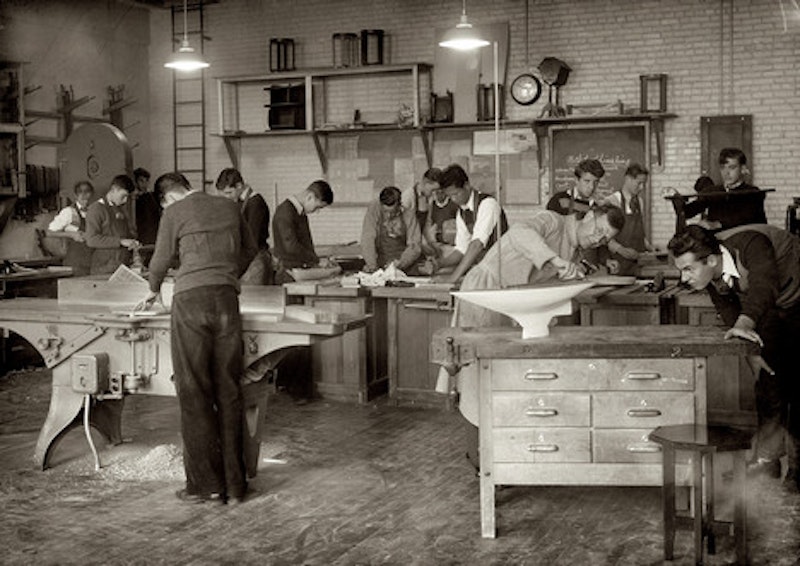 A recent post at Business Insider reports that California officials may have to release nearly 10,000 low-risk inmates before the end of the year after the Supreme Court upheld an earlier three-judge ruling that ordered releases and relocations to end desperate overcrowding in California prisons. Gov. Jerry Brown had hoped to delay those releases, likely till after the upcoming election, but the Supreme Court refused to waver. As Slate reports, with a prison population of roughly 120,000, the release of 10,000 prisoners would only bring California prisons down to 137 percent of capacity, which reminds me of a clip from the British comedy quiz show QI from a few years back, wherein Stephen Fry asks his guests, "Where are 1% of American adults?" before rattling off some truly horrific stats and anecdotes about the American "correctional" system.

Some of those stats were familiar to me. I remember reading a 2008 New York Times article about how one in 100 Americans are now in jail, and how among young African-Americans that number is one in nine. America has less than five percent of the world's population yet nearly 25 percent of its prisoners. But it was the stats about what gets made in prison that I found really troubling. I'll quote Fry at length here:

...you're not allowed to bring into America anything that's been made by forced labor or prisoners, but in America you could almost say, if you're so minded, that they've reinvented the slave trade. [Prisoners] produce, for example, 100% of all military helmets, ammunition belts, bulletproof vests, ID tags and other items... 93% of domestically produced paints, 36% of home appliances, 21% of office furniture, which allows the United States to compete with factories in Mexico because of course, obviously, the workers can't refuse to work for 25 cents an hour.

All of which got me thinking about shop class, one of those remnants of a mostly bygone era, when schools were adequately funded and home economics and art were required courses along with math and English. A Forbes op-ed from last year, "The Death of Shop Class And America's Skilled Workforce," makes it clear that California, like many other states, no longer values such vocational study, focusing instead on core requirements for college prep:

‘The intent of the ‘a-g’ subject requirements is to ensure that students can participate fully in the first-year program at the University in a wide variety of fields of study.’  (a) History/Social Science (b) English (c) Mathematics (d) Laboratory Science (e) Language other than English (f) Visual and Performing Arts (g) College Preparatory Elective Courses. High school administrators are graded on their effectiveness to administer those classes through the Western Association of Schools and Colleges accreditation. Shop class is not included in the requirements, thereby not valued and schools consider the class a burden to support. Los Angeles Unified School District (LAUSD) with 660,000 students in K-12 has already eliminated 90% of shop classes and it looks like the rest will be gone by the end of the 2013… 75% of the students in California are not going to attend university yet they are taking classes that will help them get into UC and CA State schools.

No Child Left Behind and similar educational initiatives have tried to turn high school into pre-college: AP and IB courses, SAT tutoring, the importance of well-rounded extra curriculars. I remember my high school principal would sign up qualified students for the AP test without even telling them—if you were taking an AP class and forgot or otherwise didn't want to take the end-of-year test, she'd fill out the paperwork for you. Yet for many students, especially those in poor inner city neighborhoods, graduation rates are still low. A recent Dept. of Education report indicates that Hispanics and African-Americans still drop out at two-three times the rate of whites. And for those who do go to a four-year college: about 83 percent of whites will graduate, while only about 66 percent of African-Americans will.

I'm not suggesting some naive correlation between shop class and academic success. What I am suggesting is that the most disadvantaged students—living in dangerous neighborhoods, without family structure or parental guidance, without after school support or role models—who by ninth grade are already several grades behind in math and reading, these are the kids who most desperately need to know that their value is not defined by memorizing algebraic formulas or reading Great Expectations. That art, music, shop work, cooking, sewing, these are valuable skills, and schools have a responsibility to expose students to that sort of work. Because a kid who's failing science, history and English but finds out he's good with his hands may become more than just another prison stat.