The Washington Post’s Grasp on Maryland

A former reporter and governor’s press secretary reflects on the paper’s sale. 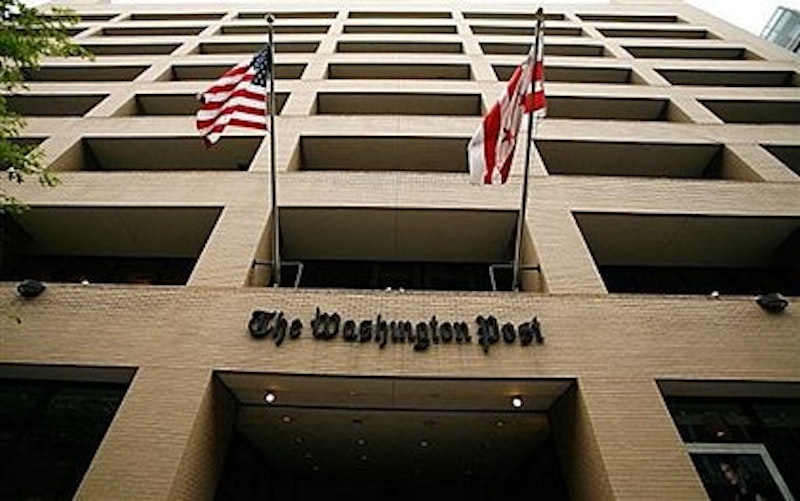 The Washington Post building, at 1150 15th St. NW, ought to be declared a national monument. Within it, the Pentagon Papers were published, the Watergate break-in was unearthed, a president was driven from office and the journalism profession was transformed forever by a movie, All The President’s Men. Instead, the mythic building’s up for sale. Anyone with $25 million to spare can purchase a piece of history.

That’s exactly what Jeff Bezos did. The Amazon.com founder paid $250 million for the building’s contents, the Graham family heirloom newspaper and a couple of other holdings. And now nobody knows what to expect except that Bezos is worth an estimated $25 billion and can do pretty much what he wants. There’s one thing for sure: The Post will wind up on the home page on Kindle, Bezos’s proprietary gizmo that helped kill the book business. The big question now is whether he’ll do the same thing to the printed Post.

Newspapering has always been the sport of rich individuals and families—Hearst, Chandler, Pulitzer, Whitney, McCormick, Taylor, Dow and Jones, Sulzberger—to name a few. So the Grahams didn’t so much change hands as they did pockets, much deeper pockets. In addition to Bezos, newcomers to the tight little circle of moneyed newspaper entrepreneurs include John Henry (Boston Globe), Philip Anschutz (Clarity Media Group), Aaron Kushner (Orange County Register), and Warren Buffet (Richmond Times-Dispatch and other papers). The Tribune Co. newspapers, which comprise The Baltimore Sun and seven others, are also for sale and their possible purchase has been linked to the multi-billionaire Koch brothers.

The Washington Post, despite its power-town name, is very much a local newspaper to about half of Maryland, one of a half dozen beats that the paper regularly covers that also include Virginia, the District of Columbia, the federal government the nation and the world (with real reporters and bureaus and not wire services).

The Post has always been a strong presence in Maryland, especially in the State House. Back in The Washington Post’s swashbuckling Watergate era, Maryland Gov. Marvin Mandel (and me) were occasional lunch guests of the editorial board in the newspaper’s executive dining room, Mandel as a regional and national newsmaker and me as a tag-along press secretary. The two larger-than-life people in the room-full of talent were, of course, the Post’s take-charge publisher, Katharine Graham, and the full-swagger executive editor, Ben Bradlee.

At one lunch, Graham displayed her command as a celebrated hostess and mixologist, declaiming that nobody made a better Bloody Mary. When the vegetable-garden-in-a- glass reached me, I asked if I could have a Beefeater gin on the rocks. “You certainly can,” Graham said, “after you have one of my Bloody Marys.”

And as those on-the-record luncheon conversations wound on, Bradlee’s signal that he had reached his boring point was to pull out a small ivory-handled penknife and begin picking at his fingernails.

Maryland returned the dining-room hospitality. The Post’s metro editors of the moment, Harry Rosenthal and his deputy, Leonard Downie, who would succeed Bradlee as executive editor, insisted that they and the State House reporters have dinner at the Governor’s Mansion each year during the legislative session. They insisted on paying but never were billed.

During one dinner, Richard Cohen, then a State House reporter and now a columnist, was strutting his stuff before his editors and suddenly got slammed. “Governor,” Cohen said, “I don’t know how you do it. You seem to own the legislature. You get anything you want out of them. How do you do it?”

The State House pressroom was a fun-house full of talent from the wire services and the five daily newspapers of the era. Through it passed Post reporters Wendell Bradley, Don Hymes, Richard Homan, Jack Eisen, the late Alan Dessoff, John Hanrahan and Peter Jay, who left the Post to become a columnist for The Baltimore Sun, and many others. Tom Edsell departed The Evening Sun to become a Post reporter and is now a journalism professor at Columbia University, the author of four books and a blogger for The New York Times. And so, too, did Tom Kenworthy trade his Evening Sun press card for a Post credential.

Lissa (then known as Allison) Muscatine, another Post State House reporter and editor, became a White House speechwriter for Hillary Clinton. Dale Russakoff earned a State House desk in the Post’s press room corner for decapitating Bert Lance, Jimmy Carter’s budget director, when she was a reporter in Atlanta. And John Feinstein, the author and Post sports authority, covered the State House one season for a change of scenery. That experience produced a novel, a roman a clef mimicking the administration of Gov. Harry R. Hughes (D).

In the early 70s, there was the generously talented Washington Post quartet of Richard Cohen, Lawrence Meyer, Edward Walsh and Fred Barbash. Their Maryland State House reporting catapulted them to the Post’s top ranks. Cohen is a syndicated columnist, Meyer reported from the Middle East, wrote two books and went on to edit the Post’s weekly edition (when it had one), Walsh became a national correspondent and Barbash was a multi-tasking journalist who covered the Supreme Court, was London bureau chief, national editor, business editor and assistant managing editor. Cohen broke the story of Spiro T. Agnew’s resignation as vice president and Walsh broke the story of the federal investigation of Mandel.

There was, incidentally, also a tyro reporter, Bob Woodward, who did his boot camp reporting covering the State House for the Montgomery Sentinel before joining the Post and rising to Watergate fame. And Sally Quinn, wife of Bradlee, was a feature writer for the Style section. She spent several days traveling in the 1974 campaign Winnebago reporting for a long piece on Mandel and his new bride, Jeanne Dorsey.

On a lazy afternoon, I received one of many touch-base calls from Barbash. He asked if it was okay if Dustin Hoffman listened in on the phone call. The actor was prepping for his role in All The President’s Men about the unraveling of the Watergate Scandal. I agreed. Barbash and I exchanged routine questions and answers about the State House news events of the day. Later, Barbash called back and asked if I was interested in Hoffman’s impression of the conversation. “He said they’re all a bunch of f-----g liars.”

The movie changed journalism forever as well as the rules of engagement between reporters and the people they cover. It was based on the book by Carl Bernstein and Bob Woodward, about their cracking the case of the Watergate break-in and their dealings with the source that became known as “Deep Throat.” Journalism schools spilled over with inspired young students who yearned to become investigative reporters in emulation of the two Watergate sleuths.

It was on the phone that I first met Don Graham, a nice-guy original and heir to the Post who would succeed his father and later his mother as publisher. Graham began on the bottom rung, covering virtually every lowly beat on the paper. He called daily for briefings and news of state government and political events, always prepared with just the right questions. Graham earned his chevrons and last week had to part with the paper he inherited, nurtured to greatness and loved.

After government service, I returned to my roots in journalism as a columnist for The News American in Baltimore where I began as a young political reporter two decades earlier. The News American folded in 1986. I was encouraged by Barbash and others to apply for a job at the Post. I interviewed with Downie, by now managing editor, and presented the requisite swatch of clips, a sampling of my columns. Several days later, the clips were returned by mail with a terse rejection note: “You commit a style of writing that is unacceptable at the Post.”

Years later I saw Downie at an opening-day Orioles game. He was with Leonard Shapiro, the Post’s sports editor and I was a guest in the team owner’s skybox. He asked what I was doing: “Talk radio,” I said. “I commit a style of talking that is acceptable at WBAL.”

The Post’s building may never achieve landmark status, but Ben Bradlee, now 91, is about to become a monument unto himself. The White House announced that Bradlee will be awarded the Presidential Medal of Freedom, the nation’s highest civilian award.