A Dwindling "National Conversation": Who Cares About Jill Abramson

The New York Times’ executive editor epitomizes why her paper is in trouble. 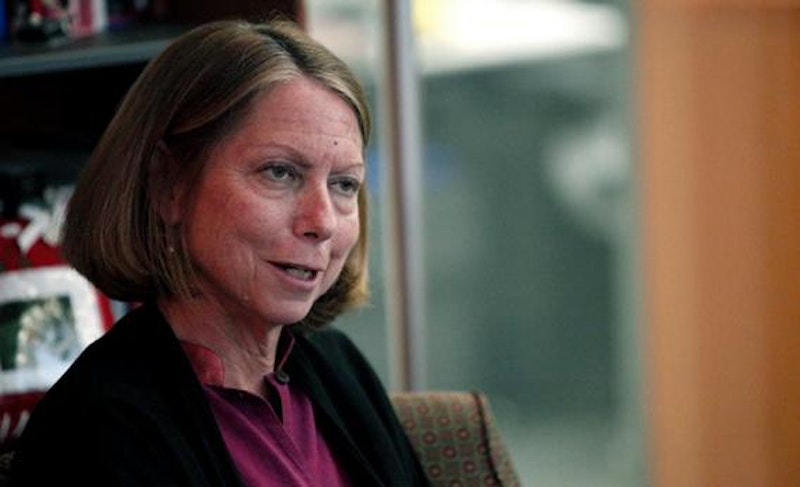 Don’t ask me how or why stories are assigned at Tina Brown’s flagging Daily Beast. It’s not really a mystery, actually, just the sort of crap she mostly published in the short-lived and never-lamented Talk in the late 1990s, after an extraordinary run at The New Yorker where, at the top of her game, she boldly led that weekly into the then-modern age. Still, Brown’s editorial flopping of her arms is like a disease that doesn’t dissipate even after multiple treatments. She apparently doesn’t understand that old magazine-style articles aren’t, for better or worse (and I’d say worse) really relevant today. (I think that’ll become evident in the next two years when the Conde Nast quality titles that still publish very long and excellent stories by reporters who spend months on them, have a day of reckoning.)

Latest example: Lloyd Grove’s pointless and brown-nosing-to-the-hilt profile of New York Times executive editor Jill Abramson that appeared on the last day of July. Grove, who’s worked with Abramson before, begins with the by-now antiquity of a Politico story by Dylan Byers that was… really mean to the 59-year-old Times editor who, Grove tells us, lives in Tribeca and was “active in undergraduate journalism” at Harvard, as if that were an exotic qualification at the Times. Abramson admits she had a good cry after the story appeared, which alleged her stewardship at the paper was rocky and she was unpopular with many reporters. So what? Aren’t editors always unpopular with some of their employees? You’d think she’d be more upset if everyone loved her.

But I’m getting sucked into the gossip about a woman whose personal life I couldn’t care less about. The real takeaway from Grove’s fawning collection of several thousand words is that the Old Guard is circling the wagons, and if not quite like Custer in 1876, the outlook isn’t much rosier. It makes sense that Abramson’s social circle includes women and men who are roughly her age and recall a far different media world: Maureen Dowd, Alessandra Stanley, Michiko Kakutani (as if it matters, Grove lets readers know that Michiko was a recent guest at Jill’s weekend house in Connecticut), Jane Mayer, Al Hunt, Bill Keller, and Steven Brill. Who knows if Abramson plans on a long tenure at The Times, but if so, she ought to drink wine with journalists under the age of 40. People who don’t believe, as Abramson told defector Nate Silver (35), who was plumping his “brand,” that, “The New York Times is always the prettiest girl at the party.” As I wrote recently the Times’ refusal to immediately extend Silver’s contract after his celebrity (and page view bonanza) turn last fall, was the most recent sign that the paper’s decision-makers have almost no concept of how to manage the company’s future.

According to Grove, Abramson said: “Nate is invested in the brand of Nate… [I]n my view he didn’t assign enough value [to the 'reach and impact' of the Times], and that’s why we lost him." No kidding. If you’re executive editor of the daily that once pissed on competitors it’s not too bright to let an asset like Silver get away. I don’t read the Times enough anymore to have a firm handle on this, but when I do there’s not exactly a feeling that the upcoming generation, those talented young men and women who’ll control the media when Abramson and Dowd are really in their dotage, is represented at the paper. Help me out: how many young “stars” or, forgive me, “brands” do the Times now possess?

May the Lord have words with me for this suggestion, but shouldn’t Abramson (or someone who has a digital pulse) raid the staff of Gawker, where writers are probably woefully underpaid and would jump at a better salary and chance to create a new Times “culture.”? And the same goes for sites like The Awl and The Classical. Those three well-read websites all have serious writers, unlike the garbage at BuzzFeed and most of Politico, so it’s an extremely palatable compromise between the typewriter and iPhone.

Jettison the likes of Dowd, Gail Collins, David Brooks, Charles Blow, Thomas Friedman, all reminders of a period when the Times still mattered. Bring on the Fresh Threats and maybe the Times can remain relevant for another 10 years.