One Cheer for the Spencer Punching

Don’t make a habit of this. 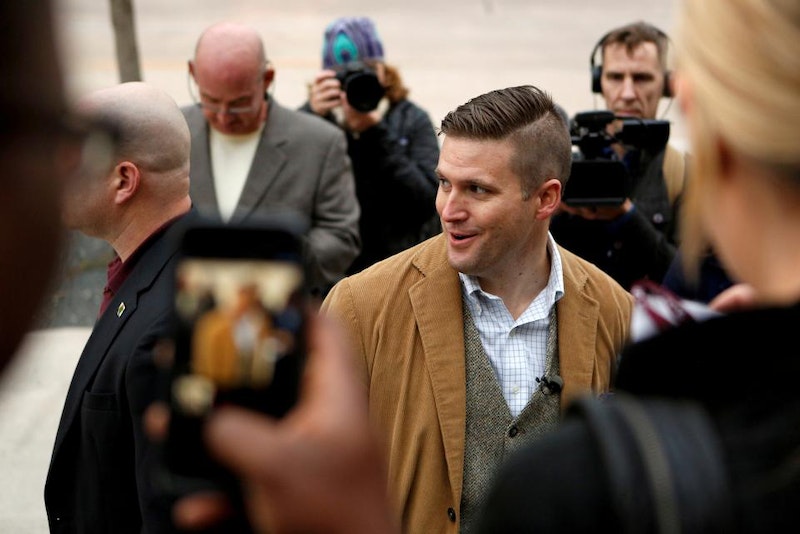 The punching of Richard Spencer has caused a lot of pleasure on social media: clips set to music, tweets of comic book covers where Hitler gets walloped, that sort of thing. There’s also been scornful hooting at the idea (expressed here at Splice Today by Chris Beck) that even Nazis shouldn’t get punched just for their opinions. My view is down the middle. No, violence shouldn’t be part of political discussion. On the other hand, in this case I don’t care that much. But I do get annoyed by the gloating.

And even there, on that last point, I walk the line. I don’t know if I watched any of the clips that were set to music, but I smiled when I read about them. (“Wind Beneath My Wings,” was that one of the songs?) I liked a meme I saw that zoomed in on the avenger’s fist, which was white, and said it must really hurt for a white supremacist to get hit by a white guy. That meme underlined a fact that I found welcome. The sight of a white supremacist made a white guy want to punch him. To me that shows something healthy about American whites and our mentality as it currently stands. A white guy who sees a white supremacist and wants to punch him is a white guy who’s doing all right.

Then again, I get tired when I see people making arguments for the punching. A prize example: the argument that we killed Nazis in World War II, so it’s absurd to strain at a Nazi getting sucker-punched today. Need I say that what we do to enemy combatants isn’t what we do to fellow citizens? That’s why we have wars: because what you do in them is different than what you do in anything else. We dropped bombs on Nazis because those particular Nazis were invading countries. The Nazi who got punched was talking into a microphone about his frog pin. He isn’t just a smaller, punier example of a Nazi. He’s a Nazi who does nothing but talk. He isn’t even getting any Brownshirts together; he puts out press releases and publishes crackpot tracts. He’s one more producer of opinions. We’re better off if we don’t start punching people for their opinions.

For one thing, people on our side can get punched just as hard. For another, society’s better off with less punching, not more. Sorry to be a downer, but you won’t like it when saying what you think gets you an ass-kicking. When the occasion comes to throw down, you’ll find you don’t do that well. Most people don’t. That’s why violence is frowned on, like hawking phlegm—the more of it around, the worse off most people tend to be. Except that, as compared with phlegm, “worse off” means possibly having an eye hanging out. If that prospect seems far-fetched, I make two points. First, our present political situation is far-fetched. Second, you may not know violence too well.

The urge to punch a Nazi—even a hand-me-down, courtesy-title Nazi like Spencer—is laudable. Actually punching him isn’t, not unless he’s violent. This may seem odd, that an okay impulse could be paired with an action that isn’t okay. If so, welcome to adult life. There’s going to be a lot less adulthood over the next few years, and the supply has already run thin. Hold on to what we’ve got.