But the boss likes her fine. 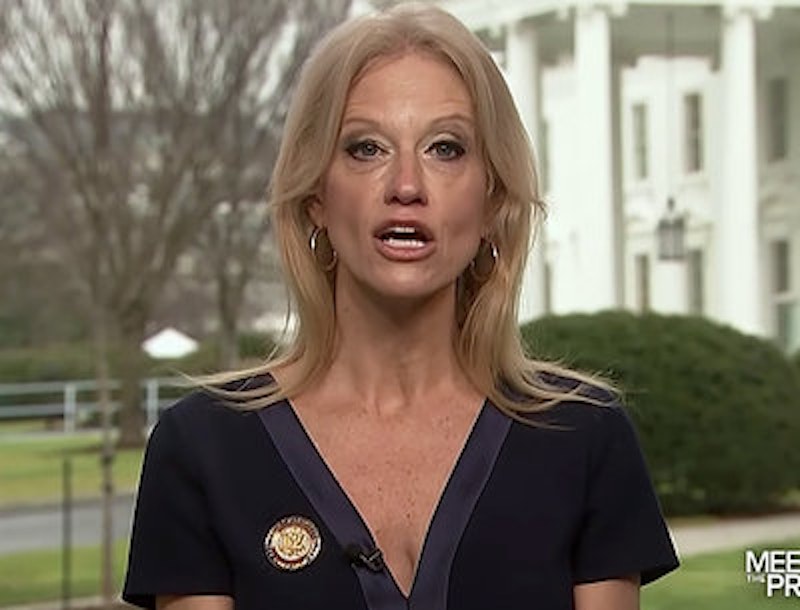 Kellyanne Conway has stripped a gear the first week of the Trump administration. A flack who comes up with a term like “alternative facts” is a flack who has screwed up. She just gave everybody a quick, handy way of both saying and proving that the Trump White House lies without shame. From her own lips they’re condemned, and in pithy form. Of course, she followed the fine work of Sean Spicer, who said, “This was the largest audience to ever witness an inauguration—period.” We don’t think you’re a liar, period. And I built the biggest pyramid on Mars, period.

The regime isn’t supposed to make it this easy to piss on them. But Conway and Spicer, professional truth finaglers of long standing, have been upended by the vortex known as Trump. The new boss of the United States hollers if he stubs his toe, and his team have to holler with him. The results make them sound silly. But Trump can’t tell. He objected to Spicer’s over-large suit and general lack of oomph, but he loved Conway’s “alternative facts” go-around with Chuck Todd. The big man called the Vice President “to rave about how she handled questions from Todd,” The Washington Post tells us (citing “one official”).

Kellyanne’s performance struck me as ragged but impressive. “We’re going to have to rethink our relationship here,” she said to Todd. To me that’s a new dimension in talking-head social dynamics. I’ve never seen a surrogate work that gear, one that I’d label “You know what? Maybe this isn’t worth it.” (My term, to be clear, not hers.) Conway did it well; even as a pioneer, she works with finesse. Kellyanne sounded fed up but regretful. She was somebody nice who’d been kicked around by customer service or a bad boyfriend, and now she was taking a stand. Of course, that stand came along with the “alternative facts” blunder. Kellyanne’s a remarkable pro, but she’s working on the glassy, volcanically blasted terrain created by her boss’ malfunctioning ego. Those conditions can force a resourceful piece of bravura like the rethink maneuver. But one’s foot keeps slipping.

We’re told Jared Kushner’s gunning for Kellyanne. The Post says Trump’s son-in-law doesn’t want competition as the king’s favorite adviser. (That’s according to “two people close to the transition.”) Meanwhile, Conway has Valerie Jarrett’s old office. Good for her—when Barack Obama was president, that office contained the President’s closest adviser. But there’s a flight of stairs between the Oval Office and the Jarrett-Conway office. A “confidant” (meaning a Trump confidant) “dismissively predicted that Trump would rarely climb a flight of stairs,” the Post tells us.

I think he might. Conway still has a shape on her and Trump’s mind homes in on tits. Admittedly, there may be quite a supply in this White House. But tits that can talk? Tell him how to dish his enemies?  Make him feel better about the news? Presidents need advice and Trump wants tits. Coincide those two and you have a Trump magnet; he’ll be finding his way to her. Also, Trump likes to watch TV, and Conway provides the kind of TV he likes. As shown by the Todd encounter, that’s the case even when she scores an own goal. Let her slash at the talking heads and he’ll be happy.

So Kellyanne has stripped a gear, yet I think her future is secure. Here I try to make up for a mistake. When she became Trump’s campaign manager, I dropped heavy hints that the relationship was doomed. I was misled. The news stories said her job as campaign manager was to hang around Trump and tell him to be a good boy. Instead she went on TV and spun everything he said and did. No wonder she wasn’t doomed. Now she just has to provide the boss with office tits and gladiatorial TV. Presumably she could—and may have to—strip as many gears as she has left, talking out of all sides of her mouth as the administration skids along. Presumably she could also seal the deal on cable TV when the Boulder Dam has blown up and the administration needs changes in the Bill of Rights. (“I just want to feel safe! Don’t we get to feel safe?”) Either way, she’s set because she’ll do anything.

Consider the following. Kellyanne Conway had to explain something to a guy, so she punched him a few times. This was at the inaugural ball, black tie. Two attendees, both men, were yelling at each other. Kellyanne intervened and the fellow who didn’t settle down got punched. That’s the story as we have it from an eye-witness who posted on Facebook “Now I know why Trump hired her,” he wrote enthusiastically. Sean Spicer had better try something like that.