We need some new words. 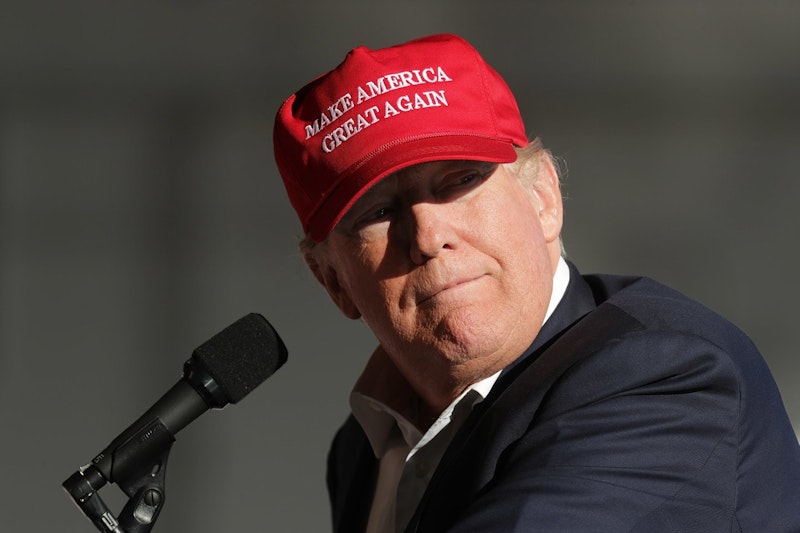 “Go back to Russia, you Nazi!” When you find yourself wanting to say that, and nowadays I often do, you know your vocabulary needs a check-up. All else aside, the Nazis didn’t come from Russia, they invaded it. “Nazi” does one useful thing in the Trump debate: it nails down that he’s off-limits because he’s racist. As an expletive with a particular meaning (Nazi = racist = politically rancid), the word comes in handy. But as a description it doesn’t.

Trump wants to do a lot of graft, have some faces kicked in, and maybe stay president for life. All those things are terrible. But if Hitler had stuck to that list, his name would be little remembered. Trump has no ideology and no private army. He has tweets and hats. Trump fans commit scattered vandalism and say mean things on social media. They aren’t in a position to take over state capitols or swamp Washington—look at the turnout for his inauguration.

Hitler and Mussolini wanted to remake society and conquer empires. As semi-intellectual monomaniacs, they spent years recruiting believers in a new order, one taking the form of large men in single-colored shirts slapping humanity toward its alleged next stage of evolution. In effect the two leaders built up giant goon squads, and these squads brought them to power and then trampled down enemies of the regime. Masses of men aren’t drilled and indoctrinated like that overnight. Even Mussolini’s Blackshirts, the piker of the two groups, took half a decade to build and numbered about 200,000 when the Fascists captured Italy. Hitler’s Brownshirts came to about two million when he became chancellor, and he’d spent a dozen years organizing them.

Faced with the Trump phenomenon, appalled Americans have been using “Hitler” and “Nazi” because those items are first on the shelf. People who don’t know much about superheroes will use Superman (or, these days, Spider-Man) as a stand-in for the whole bunch. Americans, being rookies about dictatorship and democratic collapse, reach for the worst and greatest name among political monsters, the marquee name, the most famous beast there is. But we’re facing a different animal. What Trump has in store for America’s out-groups promises to be mean and shabby, but most likely it won’t involve camps and purity laws. Nor will he have the deadly right fist that Hitler and Mussolini had, the armies of believers ready to physically strong-arm lawmakers and the rest.

Our country’s political system is buckling. Authoritarians are positioned to take power. We have to keep our eye on them and report what they’re doing. Without the right words, that becomes more difficult. If we’re going to discuss the Trump threat—as opposed to vent and fulminate—we need words that say what’s in front of us. “Strongman” probably fills the bill, but people would mix it up with “strong man” and think it was praise. “Caudillo,” “populist authoritarian” and “Putin imitator” all look promising, though cumbersome. The only words that roll out easily are “Hitler,” “Nazi” and “fascist.” But they’re not the right words.

The most important point that anyone can make about Trump is that he’s a threat to American democracy. When making your most important point, you should understand it clearly enough to be accurate. It’s time to learn more about Juan Perón and Argentina, not to mention Hungary and Viktor Orbán. Six years ago Hungary was a democracy, plain and simple. Now, after some unfortunate elections, it isn’t. That isn’t as dramatic as the Third Reich, but it may be a lot closer to what we face here.