Worst of all is race-baiter Tariq Nasheed, who tried to racialize it. 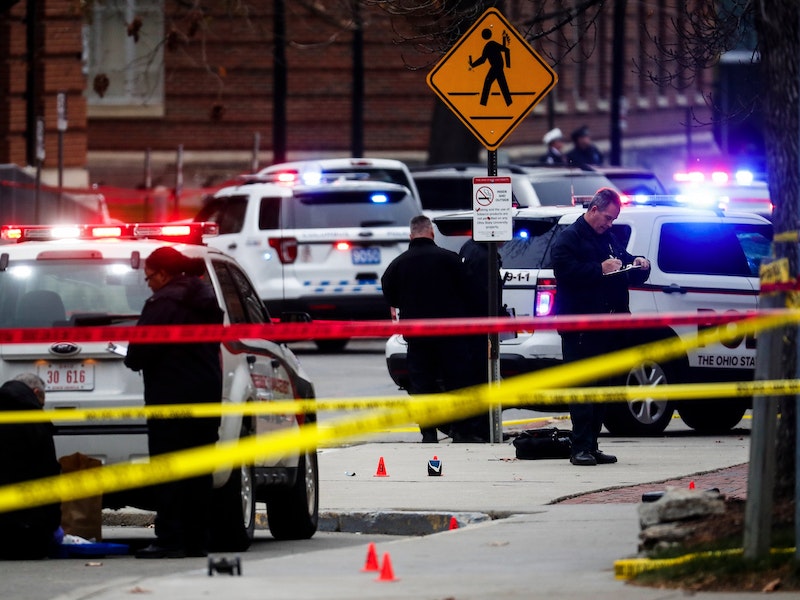 On Monday, Abdul Razak Ali Artan, a Muslim native of Somalia, executed a vehicle-and-knife attack at Ohio State University, injuring 11 people. The usual media and political charade followed in a predictable pattern. Despite the fact that Artan’s methodology was right out of the ISIS playbook, the mainstream media had to pretend it was a “possible act of terrorism,” similar to when a Muslim man in St. Cloud, Minnesota stabbed random people at a mall in September and another Muslim man detonated a bomb in New York City in the same month.

White House spokesperson Josh Earnest said one full day after the attack that it “may have been motivated by extremism and may have been motivated by a desire to carry out an act of terrorism.” May have? Is it possible he hadn't heard about Artan's Facebook post where he claimed he'd reached a "boiling point," referred to "lone wolf attacks," and cited radical cleric Anwar al-Awlaki? "America! Stop interfering with other countries, especially Muslim Ummah,” wrote the terrorist. ”We are not weak. We are not weak, remember that.”

The ABC News headline was “Ohio State Attacker Stewed Over Treatment of Fellow Muslims,” a not-so-subtle way of suggesting that he'd been provoked into violence by horrible frustration over injustice. NBC News thought it was important to immediately present the human side of someone who'd just tried to murder a bunch of innocent people, running this headline: “Ohio State Attack: Friend says Abdul Razak Ali Artan Loved America.”

There're always the progressives who immediately make any terrorist attack about the issue of gun control. Democratic vice presidential candidate Tim Kaine tweeted that he was “deeply saddened by the senseless act of gun violence at Ohio State,” but no gun was involved in the attack. Shannon Watts, founder of the gun control organization Moms Demand tweeted that “America gives dangerous people guns and asks students to defend themselves.” Time Out New York theater and cabaret critic Adam Feldman weighed in with, “Mass stabber leaves 8 people with non-life-threatening injuries is why gun control matters.” He had no evidence that Artan had been denied a gun purchase due to gun control laws or had even thought about owning a gun. MTV columnist Anne Donahue’s tweet: “It would be presidential for Trump to condemn gun violence right about now. Which is likely why it isn't happening.”

All of the above commenters made fools of themselves because they didn't wait until they had the facts, but easily the most asinine and disgraceful high-profile public reaction came from former street hustler and current “relationship expert,” podcast host, and professional race-baiter Tariq Nasheed (aka Tariq Elite, King Flex, and K-Flex), who tweeted this: “So white officer Alan Horujko who shot and killed the Black Somali stabbing suspect in Ohio is being paraded as a hero. That’s interesting.”

Tucker Carlson hosts a Fox News show in which he skewers the lunatic element of the political left, of which Nasheed is a member, so he brought him on for a debate on his tweet. The author of The Art of Mackin’ then claimed his tweet was “neutral” and “wasn't meant to racialize the event,” while falsely claiming that the white establishment racialized the incident. Nasheed pulled the race card on the host, referring to his “suspected white supremacist views.” He then told Carlson that he’d used quotation marks around “terrorist” in one of his tweets referring to Artan because he wanted to get all the facts before he labeled people, unaware of his hypocrisy.

Carlson then asked why, if the U.S. is the white supremacist country Nasheed claims it is, would it bring in an African black person and give him government assistance to receive an education. The dating expert’s embarrassingly lame reply: “So we don't live in a system of complete white supremacy? Everyone’s lying, Tucker?” To which Carlson, looking stunned at the inanity of Nasheed’s response, could only muster “huh” in reply.

Nasheed failed to make one valid point in defense of his attempt to divisively inject race into the terrorist attack, and he concluded by again calling Carlson a “suspected white supremacist.” Still he felt strong enough about his performance to tweet out a link to the segment where he's “destroying Tucker Carlson on his own Fox News show.”

In Nasheed’s world, calling someone a “suspected” white supremacist is “destroying” them in a debate. He takes the left’s self-destructive propensity for name-calling, which is what helped Trump get elected, to a new level. Nasheed's tawdry rhetoric and the pussyfooting around the terrorism issue from progressives helped to make Trump's response look strong. He said the terrorist shouldn't have been in this country in the first place. There's no way of knowing if even Trump's “extreme vetting” of immigrants would’ve found Artan suspicious, but the President-elect at least appears to understand what the issue of terrorism is about, while Obama doesn't. Next to Trump on this issue, his opposition just looks confused and uncomfortable.