Regressive-Left Online Poison Almost Made Me a Horrible Person

It all started with Noah Berlatsky and Neil deGrasse Tyson. 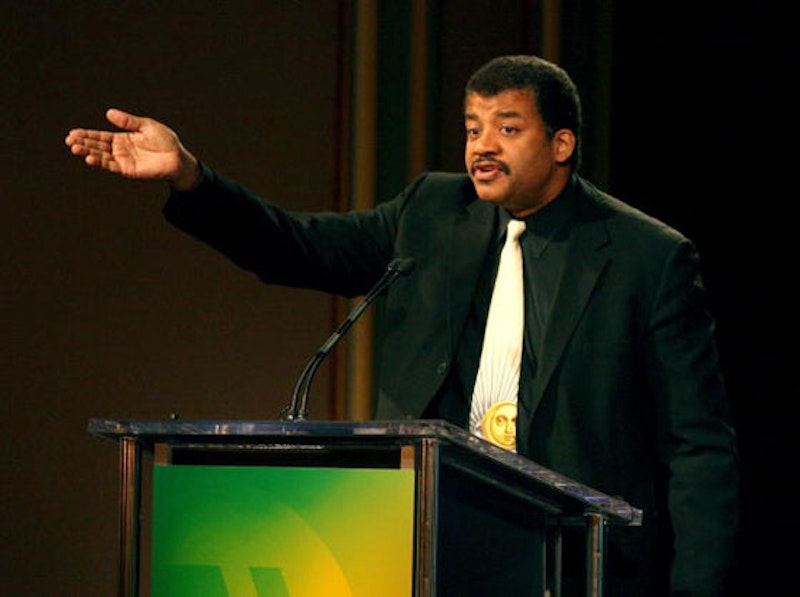 In the wake of Donald Trump's unlikely presidential victory, many people are saying that Americans are so tired of political correctness that they voted for him out of spite and anger. Those who enforce the PC code fall under various rubrics, including social justice warriors (SJW), intersectional feminists, and regressive leftists. Their passion intrigued me. Surely if I checked them out I'd find they were not all the intolerant and self-righteous name-callers they sometimes appear to be.

I began my sojourn into regressive leftism with the writer Noah Berlatsky (who writes regularly for Splice Today), after hearing him described as The Only Righteous White Man Alive. Berlatsky introduced me to the concept of “intersectionality,” a social justice theory where the least “privileged” members of society are in total control, while the most privileged are ignored due to their skin color or gender. This group evaluates opinions based on who’s offering them, not their quality. In fact, it’s impossible for them to appraise an opinion without knowing whose it is. I became drawn to this worldview even though I'm a white male whose opinion is worthless under intersectionality. Such is the force of Berlatsky’s polemic. He's miraculously free of even the slightest hint of any sort of bias or prejudice. Compared to Berlatsky, almost all people are sexists, racists, and Islamophobes, which he constantly reminds readers of.

I then moved on to the ultra-liberal astrophysicist Neil deGrasse Tyson, checking out a few of his YouTube videos. He’s very smart. Perhaps even as smart as Berlatsky. When the rapper B.o.B. declared that the world is really flat, Tyson was there to shut him down. He's implied that Catholicism, Judaism, and Mormonism are crazy religions that are no nuttier than Scientology, but hasn’t said anything similar about Islam. That would be Islamophobic to him and his fellow regressives, who believe strongly in double standards. Though my knee-jerk reaction was initially shock that criticism of only one particular religion must be censored, I eventually found myself sliding into thinking that 100 percent of Islam’s critics are Islamophobes and racists, even though Islam is not even a race.

I soon discovered how YouTube’s “suggested videos” leads you down a rabbit hole with their algorithms. Moving on from Berlatsky and Tyson, I checked out some feminism YouTube channels, and learned about The Patriarchy, that ruling cabal of males that rules the planet with an iron hand. I soon began railing against this group of oppressors, except within the Muslim world, of course, and became guilt-stricken fixating on all the times in the past that I may have manspread or mansplained.

Watching SJW videos on the concept of “privilege,” it wasn't long before I’d convinced myself that even the dirt-poor peckerwoods of Appalachia have it much better than the black college grads getting interviews at Google and Goldman Sachs. I began to look for ways to heal my toxic whiteness. I'd turned into an outrage junkie. I became irate when an acquaintance told me he'd named his hamster after Robin Thicke. When my friends told me they'd just had a baby boy, I thought, “How dare people biologically label their baby a particular gender when the child hasn't had time to make this determination yet.” I began to see tanning and dreadlocks as cultural appropriation. Learning a foreign language could be appropriation too, depending on the privilege dynamic at play. Staircases started to make me angry. They were “ableist,” because not everyone could use them. Someone told me communication is the key to a good relationship, and I saw this as ableist too. Some people aren't good communicators and this sort of thinking denigrates their contribution to a relationship. A gender fluid lesbian dance theorist I watched on YouTube explained toxic masculinity, and I soon found I couldn't enjoy football any more.

I was immersed in the world of regressive leftism for three months. I tried to keep it to myself, but my friends started to notice things. I'd tell them yoga is cultural appropriation, explaining about “cultural genocide” and “Western supremacy,” and they'd roll their eyes at me. I’d explain that free speech is an outdated concept, because if it's offensive to even one person then it must be censored. “Words have meaning!” I’d shout, and they'd look at me strangely.

Then one day, while participating in an online bullying session of someone who’d accidentally (no excuse, as they neglected to ask) used the wrong pronoun for a bigender person, suddenly I asked myself what I was doing. Maybe I was becoming an asshole in some kind of cult, always compelled to punish people and act smug and self-satisfied.

This was the epiphany. I unsubscribed from all the YouTube channels and un-followed Berlatsky on Twitter. He's the one who'd drawn me into the vortex with his seductive words in the first place. I thought I was becoming more open-minded but I’d become an intolerant curmudgeon wanting to participate in the Balkanization of society. I made it out though. I escaped a movement that would inevitably lead to a collection of monkeys throwing nuts at each other from separate trees.