From Trump supporters to Gamergate. 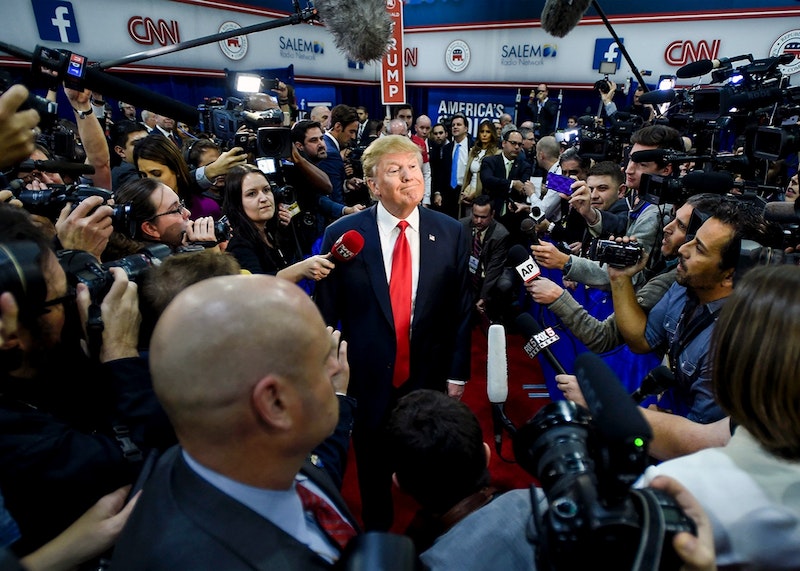 In the film Memento, a man named Leonard has a memory problem. In the aftermath of a vicious assault, he can’t make new memories. Leonard knows who he is and where he’s from, and he remembers his life up to the point of the attack, but he can’t remember anything new for more than 10 minutes. If he needs to remember someone he just met, he takes a Polaroid, then jots down their name and pertinent information on the picture. For his recent acquaintance, Teddy, he writes a note on the back on the picture: “Don’t believe his lies.” But it turns out, Teddy is mostly honest, and Leonard can’t accept the truth, or forgive Teddy’s moments of deception. By writing, “Don’t believe his lies” on the back of Teddy’s Polaroid, Leonard manipulates not only his own memory, but also his behavior, and, ultimately, his own moral trajectory.

There’s a clip of a CNN discussion gone viral that provides a way to look at this. Host Alisyn Camerota interviewed a panel of Donald Trump supporters, and it turns out their sense of accurate information isn’t very good. The most vocal person in the group, Paula, believes that three million “illegals” not only voted in California, but that President Obama and local authorities are fine with it. The interesting part is that everyone on the panel agrees that they remember seeing Obama himself say that it was fine for illegal immigrants to vote. Camerota, in a quick fact check, assured them that not only did Obama not say that but there’s so far no evidence of voter fraud they described, and also found the questionable source for the allegation (in fact, the White House has gone on record to say “that there has been no evidence to support a claim like that.”). The panel refused to believe her. It was as though they, like Leonard, listened to everything Camerota had to say, then flipped over the photograph and read, “Don’t believe her lies.” They believed their own faulty memories or what they wanted to believe above the person speaking the truth before them.

I hate to make everything about partisanship, but we’re living in hyper-partisan times. People on either side of the aisle have different demands from their news. The Right usually wants their news to be straightforward, with little interpretation, and the left is more likely to view journalism as a necessary public service. The Right is more concerned with bias, and the left is more concerned with sensationalism. The Right has been so fixed on the Left dominating media, and pounding that drum hard, that they’ve made it one of the most effective weapons in their arsenal. In looking at some of the Right’s most prolific authors, like Ann Coulter or Hugh Hewitt, it’s common to find entire chapters devoted to liberal media bias. A few have made it the topic of entire books: Ben Shapiro, Laura Ingraham, and Bernie Goldberg. In a recent New York Times column, Ross Douthat describes how the Left not only dominates news, but also saturates so much of the broader culture, that many conservatives are struggling to not feel irrelevant.

The media’s great battle will be against the confirmation bias of their audience; that the audience is looking to the media to validate their own beliefs, even when they’re objectively wrong. Confirmation bias also affects memory because one is more likely to remember information that supports an established position. The more one abandons intellectual curiosity to indulge their biases, the more likely they are to regard someone saying something objectively to be a liar. Between cable news and the Internet, it’s easy to be overwhelmed by the pace and volume of it all. Splice Today’s publisher, Russ Smith, told me: “Media today is such a landfill that people don't want to be persuaded. Yes, of course, the Internet's made it far worse. We live in a media that's comprised of echo chambers, where people only seek out venues that they agree with… I subscribe to the Journal and the Times, but when I retrieve them from my lawn at six a.m., the news is already old.”

If there was ever a moment where it appears the public found a way to tell themselves how to not believe the media’s lies and alter their moral trajectory, and really give in to their own biases, it was Gamergate. It began with the scorned boyfriend of a game developer accusing her of sleeping with several gaming critics for good reviews. In the wake of this supposed revelation, Gamergate coalesced around a banner of “ethics in gaming journalism.” The irony is that the alleged sex never took place, but the game developer continues to mostly live in hiding, her life plagued with persistent threats of violence. In an article for The Guardian, Matt Lees details how this indifference to the truth metastasized into aspects of the alt-right and the Trump campaign’s persistent media-bashing: “The beauty of this anti-establishment standpoint is, when any mainstream media source seeks to challenge the collective beliefs of the movement, it’s merely used as further evidence that journalists are untrustworthy and aloof… The ‘post-truth’ reality is not simply an accident—it is a concerted assault on the rational psyche.”

In Memento, it doesn’t end well for Teddy. When Leonard realizes that Teddy used his memory problem to trick him into doing something terrible, for what Teddy believes are good reasons, Leonard can’t forgive him. It’s kind of funny that conservatives say they prefer their news to be straightforward. PBS provides the most straightforward news on television, while Fox is a haven of conservative commentary—and Fox dominates news ratings. Perhaps what the Right really wants, and has wanted all along, is for the cultural bias that Douthat describes to be more in their own image.