Media power, temporarily in the hands of the people who the media is supposed to serve. 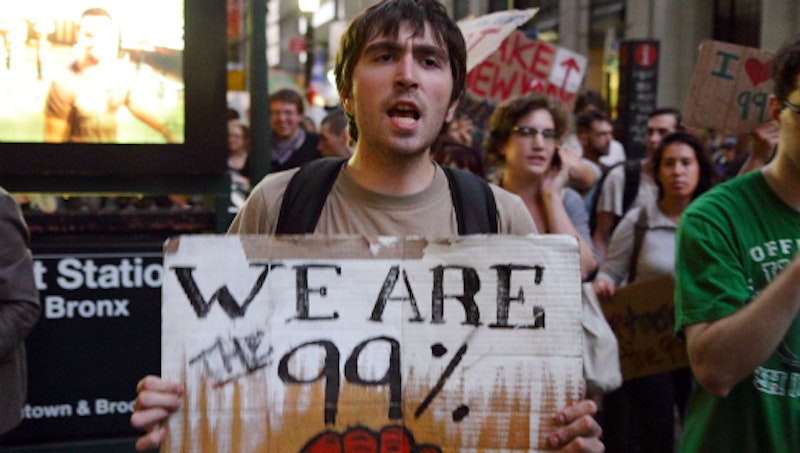 Occupy Wall Street is a month and change old now, which in our hyperactive epoch means several generations of easy "Occupy X" jokes have lived and entertained and died. My favorite so far, posted on Facebook by someone involved in the musical underground, is a ersatz poster promoting live event patronage: "OCCUPY A FUCKING VENUE." Reasonably famous people have found common cause with the protesters; some have even shown up at protests. Occupy Wall Street—and its regionalized offshoots—boasts libraries, newspapers, websites, placard concepts for the unimaginative leftist, and OWS condoms for those times when one bandanna'd, disenfranchised occupier wants to occupy another bandanna'd, disenfranchised occupier in an AEI tent without, you know, catching herpes or inadvertently siring offspring in an America where the 1% run blithely roughshod over the 99%.

Bloggers, pundits, and regular beat reporters are covering the fuck out of this story, because it's become very apparent that a great many people are willing to risk their health and physical safety to communicate their displeasure with the state of the economy via prolonged public action and tried and true civil disobedience. OWS has been a kind of benign 9/11; driving to NYC to show solidarity at Zuccotti Park is the new driving to NYC to assist at Ground Zero, I suppose. Given its scope and breadth and the refreshing shock of thousands of people breaking away from the Spectacle long enough to take to the streets in earnest, not much else matters. Not the Tea Party furthering the collapse of democracy. Not whether or not Rick Perry is a viable GOP presidential nominee. Not sex scandals or Odd Future. Not sports or the fall television season or the impending Stone Roses reunion. All eyes are squarely on OWS, which exists in a full, vivid technicolor, while your dog devouring your LP collection and global warming and Justin Bieber and Herman Cain hilariously superimposed next to the "DO THE RIGHT THING" logo on MSNBC are more faded, more sepia-toned.

"Occupy" is an interesting word to use in relation to this movement, as there hasn't been much actual occupation of actual Wall Street and outside of NYC this leaderless, amorphous throng of the aggrieved becomes "Occupy Baltimore" or "Occupy Oakland" or what have you. I read the "Occupy" prefix as engagement, as the act of being present in a purposeful way and re-claiming one's urban sphere, formally owning that space and caring about what happens to you, the person next to you, and the space itself—defining yourself as a political body, taking the air out of the ongoing political/corporate shell-game narrative and aligning with a happening that's looking more and more like a real occupation.

It's been as moving as it is inspiring, watching people—everyday people like you and me—pretty much dominating the news cycle day after day, forcing everyday people like you and me to really and truly acknowledge how far gone we all are, 30-some years after income equality started to crumble in this country and, more significantly, forcing politicians to think and talk about this honestly. And—this is key—to finally pay attention to the people who put them into power. (Ditto the media, which only began to seriously cover OWS when it was clear it had to.)

Where OWS goes next is unclear; there's talk of demands, and expansions of action, and November 5 is not going to be a fun day to be a Wells Fargo or Bank of America executive. But I worry about the likelihood of meaningful, systematic financial sector change happening between now and next November, and about the lengths some OWS members—and as with all movements, I'm sure this one has a more radical fringe—might go to in order to vent an drive home their fed-up agit-pop pique; how many lives ruined or lost, how many martyred?

It's the people versus the system: hard place creeping ever closer to immovable object. Anything seems possible and probable, and there's the unsettling sense in the air—one that gets stronger with each editorial, YouTube'd police beating of protesters, and online testimonial from hard-working people whose social and financial systems have failed them—that something's gotta give, and likely will.