Mostly because camping is so not glamorous. 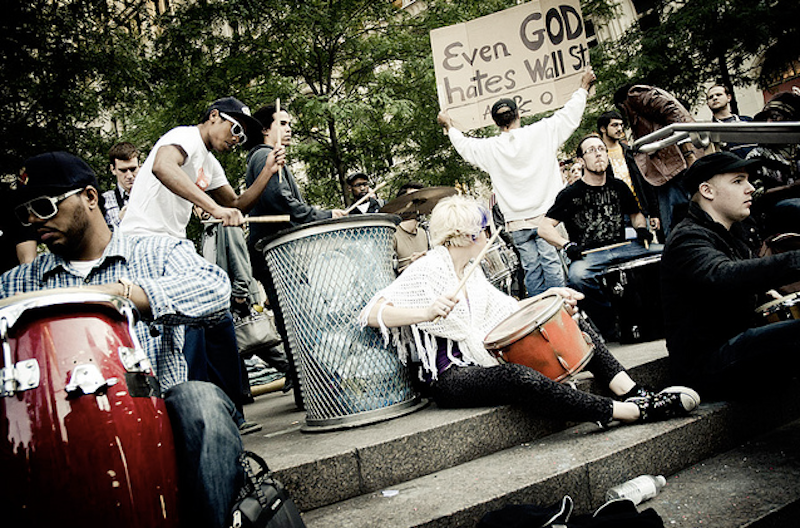 Yesterday I went to Zuccotti Park to scope out what this whole Occupy Wall Street fuss was all about. It’s like, for the past several weeks I’ve basically ignored the thing because I didn’t know what, exactly, was being protested. Yeah, I know—I’m not that great a liberal, which is why I love protests intellectually and aesthetically, but I do not actually participate. I get bored really easily and in the middle I’d be like, okay I’m over this now. Plus, I am just way too high maintenance to camp outside for five weeks. I get really bitchy without my $20 bottle of Dr. Bronner’s Liquid Soap, so.

Like many OWS articles before this have made clear, typically when people protest they are trying to annoy somebody into a corner so they give in to a specific issue, cause, or threat. When I was working at Women’s Wear Daily a few summers back, for several weeks there were these kids camped outside doing a silent protest as a way to coax a senator to get on board with the D.R.E.A.M. act. People knew what was being protested, and it goes without saying that having a movement with a message is crucial, if not step one. I have always loved protests for the social disruption they cause. I like when shit gets fucked up, and there’s a sociality and a kind of utopian, class-less, prejudice-less togetherness that emerges when different people link up for a single cause.

But I still don’t understand OWS. I’ve stopped trying to understand it and have now started to think about and appreciate it as a performance event in its own right. It’s a cultural hot spot, a bunch of cool people I’d love to be friends with, all hanging out in a park, playing, making noise. It’s a happening. I do wonder, though, if the sense of play takes away from the potential political thrust of this increasingly global movement?

I was content to keep eating my Berkshires-made $10 granola and just ignore the protests. Not ignore ignore, just not really pay attention. But I was having meatballs in Williamsburg with my friend Jake the other day—a twentysomething who used to work on the Street—and he asked if I’d peeped OWS. I’m like, I haven’t yet, no, and then he’s all, Dude, you’ve gotta go to that shit. It’s so great for our generation, it’s less a protest and more like people having sex and playing drums and stuff.

When I got out of the Fulton Street subway on the way to Zuccotti Park I shielded my eyes because, based on what I’ve been told by CNN and News 4 New York, I expected full on pandemonium—tits and ass and bull horns and mounds of cocaine lining the streets and police brutality and drag queens swinging their breast plates in the air and the whole nine. But actually, I was really surprised by how organized and self-contained everything seemed. It was like an anarchist street fair. Communal health stations with free hand sanitizer, Tums, aspirin and bandages. Free clothes. The Working Group board, which tells people involved with the community when things are happening.

This white guy in a suit was claiming to be the 1%. Brave, right? He was talking to a small but deeply engaged crowd of people about how the government fucks him over, too. “For every dollar I make, I take home 35 cents” he said. Naysayers passed by being like, Look at him with the nerve to come down here and talk about being the 1%. Asshole—which is, come on, slightly immature, guys. That’s the one thing that does get on my nerves—that just because somebody is wearing a suit or makes serious money or voices a contrarian opinion means that they are automatically bad. I liked that he had the chutzpah to jump into the lion’s den, so to speak, and that, overall, people were very engaged and listening to him speak. It was a conversation.

I left the 1% guy and I watched and bobbed my head to the drums for 15 whole minutes. Some cute hipster-anarchist guy with silver gauges in his ears was telling me he liked my hair, that I had rad hair. All the various people playing music seemed really cool. There was a lot of diversity. Then there were these people having a “dream séance” where they were basically seancing their dreams into being. The lady with the white hair playing Irish tunes on her violin was neat. Four different people told me I looked “fabulous.”

But as I gawked and strolled through the pop-up commune that the protesters had created in the park, snapping pictures of them like they were zoo animals, I couldn’t shake the feeling that I was an intruder. That I didn’t belong. That they were scrutinizing me, like why was I taking pictures and not participating in their cause. This feeling of intruding is strange for any person taking a stroll through a public park, albeit on private property, a point Lisa Foderaro’s recent New York Times op-ed points out.

The strangest part about my first OWS experience was realizing that, despite how excited and energized I was to learn more and participate and get involved in the movement—sans the camping out thing because, again, camping is not glamorous—I started to feel guilty. I felt guilty as I left Zuccotti Park being like, Okay this was really fun and I can’t wait to post all the pictures I took of you people on my Facebook, but I really need to get to the W Hotel where I will order a $6 cranberry juice, slide my brand new MacBook Pro out of my Yves Saint Laurent bag and then start typing up my Yale PhD thesis. Does doing all that completely zero out the meaning of the protest? How can one be politically minded and yet apolitical?